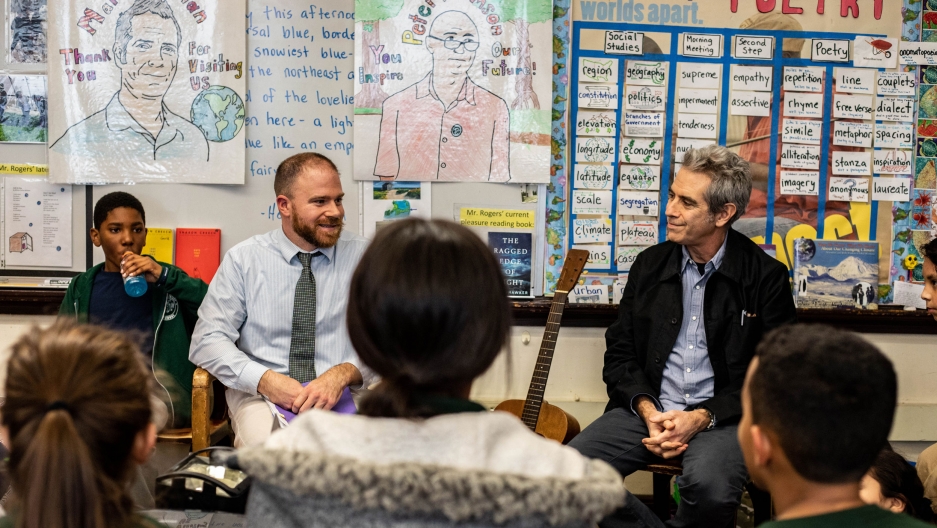 Host Marco Werman, right, visits with teacher John Rogers' fourth-grade class at Curtis Guild Elementary School in Boston. The students wrote poems based on stories they heard on The World.

We hear from a lot of listeners of The World and visitors to our website and social media feeds.

But those comments are usually brief, often anonymous, and it can be hard to know if what we do every day really makes an impact out there beyond our studios.

Well, a little while ago, we got a note from a listener that knocked our socks off.

It came from John Rogers, a fourth-grade teacher at Curtis Guild Elementary School, a public school in East Boston.

“Thought this would make you happy to hear what an impact your news program is having on the youth of our city,” Rogers wrote.

The note included a picture of a young girl named Ana Camile Valdez and a copy of a poem she’d written. 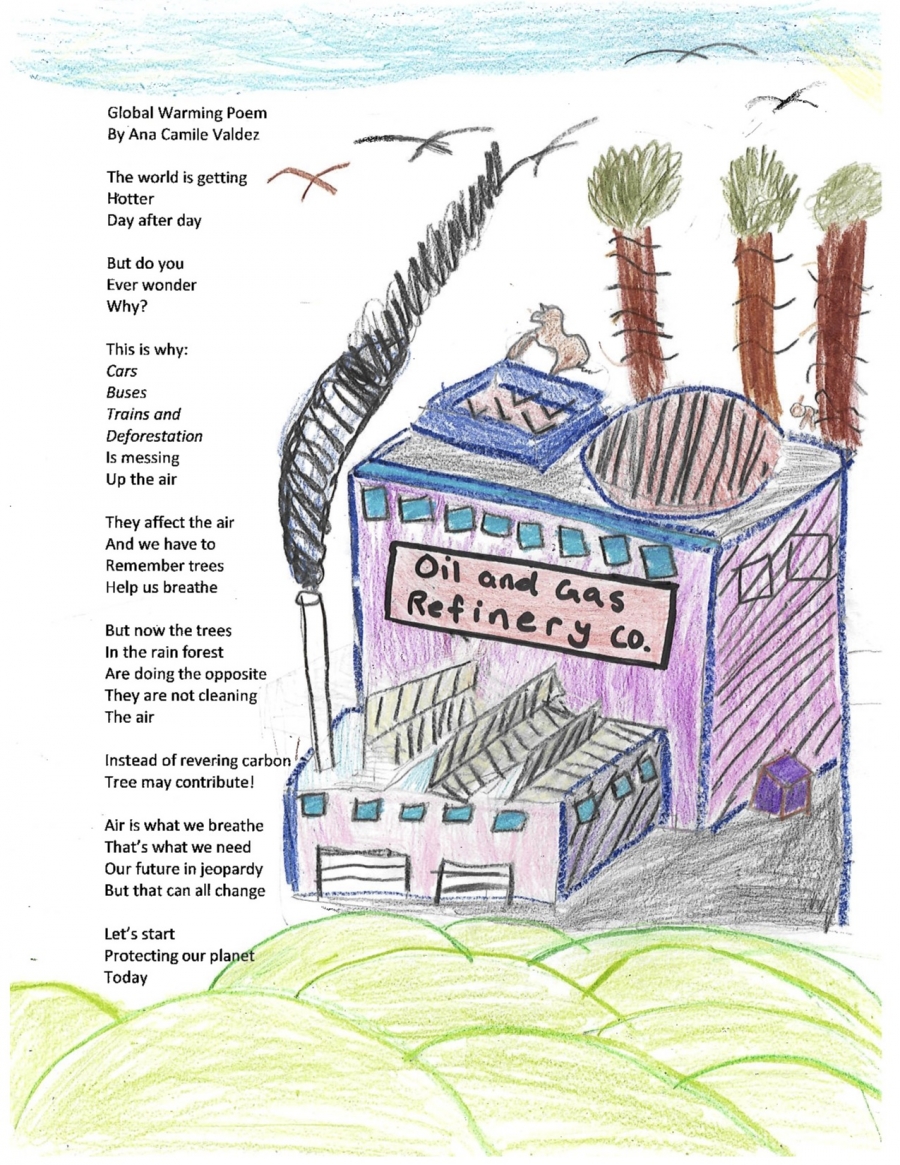 Fourth grader Ana Camile Valdez created this poem after hearing about a story The World did about climate change.

And the story of Ana’s poem begins with The World.

The class has a morning meeting every day. There’s a daily greeting, a quote that the kids will discuss and a quick game.

One morning back in October, he talked about a story he’d heard on The World the night before.

It was about the Amazon rainforest in Brazil, and how scientists are finding that climate change is stressing the forest, and maybe making it less able to absorb carbon dioxide pollution. And how that, in turn, might be making climate change even worse. 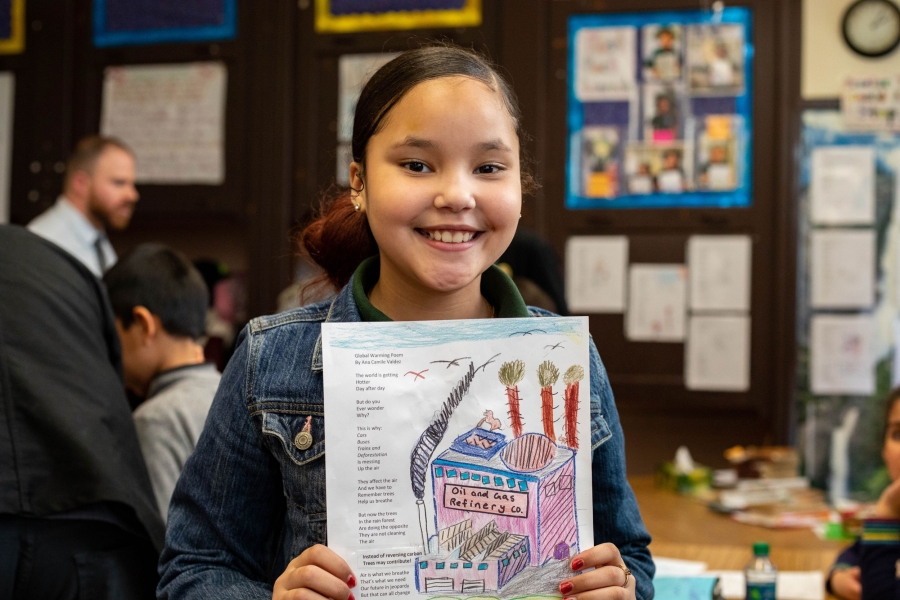 After the meeting, the class got on with its day. No further mention of the news, the Amazon or climate change.

But the next morning, Ana’s poem appeared on Rogers’ desk.

He already knew how great his kids were but this kind of stunned him.

“I felt really impressed that a student took that initiative herself," Rogers said. "[We were] heavy into a poetry unit … but to take it upon herself to write a reflection poem that talks about global warming and standing up for the environment. And it was this beautiful poem about how we have to act now and that the future is ours and we have to make a difference.”

That’s when Rogers sent us his note and invited us to visit his class. 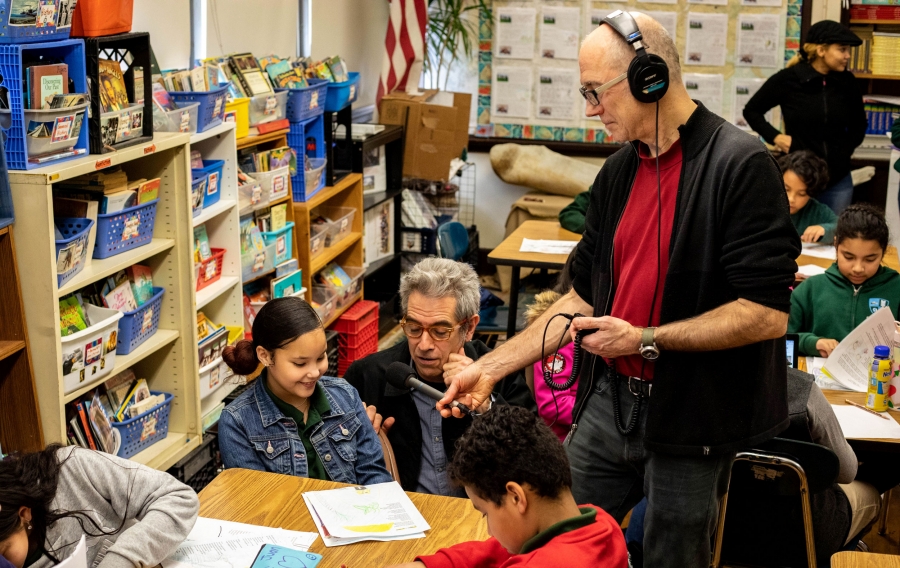 And it turns out that Ana’s poem was only the beginning of the story of these remarkable fourth graders and their engagement with our show.

“It was almost like a wave had begun,” Rogers said. “We all wrote global warming poems.”

And there were others: poems about a mom and her kid teargassed by border patrol agents at the US-Mexico border. Poems about the economic inequality exposed by the "yellow vest" protests in France. Poems about the murder of Jamal Khashoggi and freedom of the press. One about a Japanese man who spent 50 years in jail for a crime he didn’t commit.

Also, these being fourth graders, the death and global influence of the man who created SpongeBob SquarePants.

Most of these are heavy topics. But Rogers says the kids can handle it.

“I think fourth grade is always a grade when they come so young and leave like little adults,” he said. “And learning about sad stories or scary stories, I think, just helps motivate that maturity. And poetry, I think, is the perfect vehicle to have them reflect on it, because it takes away some of the barriers of traditional essay writing."

A little while ago we got a note from a listener that knocked our socks off. John Rogers, a fourth-grade school teacher at Curtis Guild Elementary in East Boston, sent us a photo of one of her students and a poem she wrote. . As part of his morning routine with his students, Rogers discusses world news. Back in October, he shared one of The World’s stories about the Brazilian Amazon which inspired Ana Camile Valdez to write a “Global Warming Poem.” . Ana’s poem kind of blew us away, so host @MarcoWerman and environment editor Peter Thomson visited the school to meet Ana and the rest of Mr. Rogers’ class. First things first, Ana read her poem. . Global Warming Poem. By Ana Camile Valdez The world is getting hotter day after day. But do you ever wonder why? This is why: Cars, buses, trains and deforestation is messing up the air. They affect the air, and we have to remember trees help us breathe. But now the trees in the rainforest are doing the opposite. They are not cleaning the air. Instead of revering carbon tree may contribute! . Air is what we breathe. That is what we need. Our future in jeopardy But that can all change. Let’s start protecting our planet today. . Ana explained to host @MarcoWerman why the story prompted her to write her poem. “I am also a human being, so I really care about the earth. And really it’s mindblowing how we just destroyed our earth… But we can still change. It’s not too late.” . Video by @stevendavy Amazon story by @sameatonpix With support from @pulitzercenter

As for Ana, the girl who got this all rolling with that first poem, she says she was motivated by a simple impulse.

“I’m also a human being, so I really care about the Earth,” she said. “And like, really it’s like, mind-blowing how we just destroyed our Earth. But we can still change, it’s not too late."

Ana and her fourth-grade classmates at the school were inspired by us here at The World, and by Rogers, their teacher.

But man, have we been inspired by them. 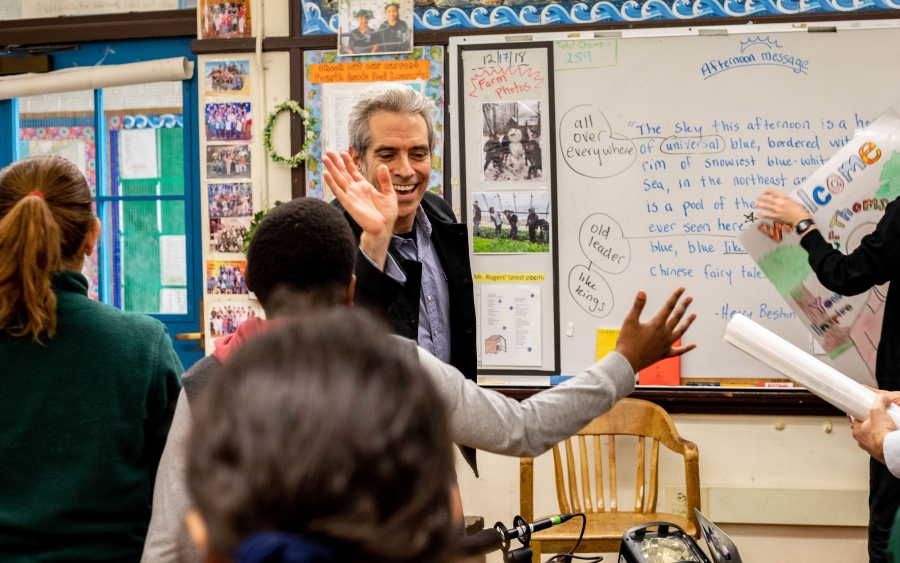