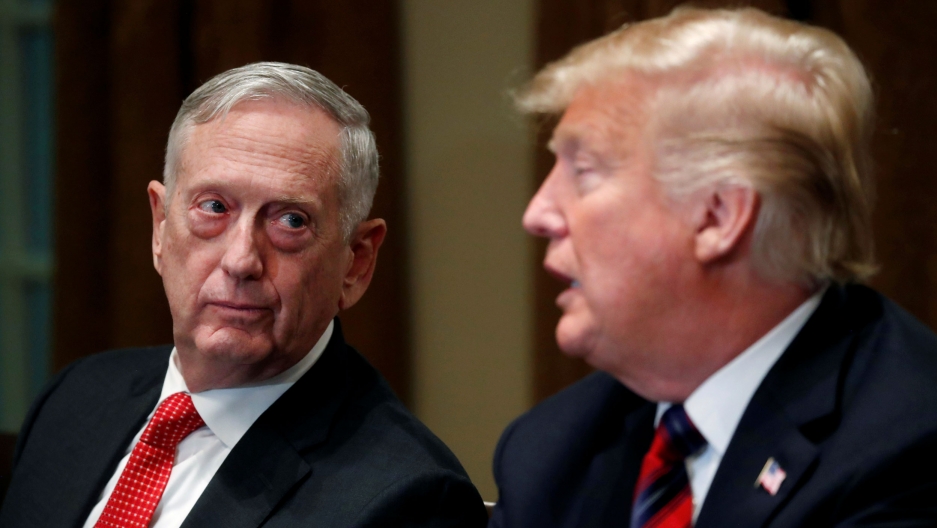 US Defense Secretary James Mattis listens as President Donald Trump speaks to the news media while gathering for a briefing from his senior military leaders in the Cabinet Room at the White House in Washington, D.C., on Oct. 23. Mattis announced his resignation Dec. 20 and said he would be leaving the administration in February.

"Because you have a right to a Secretary of Defense whose views are better aligned with yours on these and other subjects, I believe it is right for me to step down from my position," Mattis said in his resignation letter, which was released by the Pentagon.

Earlier, the president took to Twitter to say Mattis would leave his job in February.

General Jim Mattis will be retiring, with distinction, at the end of February, after having served my Administration as Secretary of Defense for the past two years. During Jim’s tenure, tremendous progress has been made, especially with respect to the purchase of new fighting....

The president's announcement on Syria came despite opposition from US allies and military officials.

The World interviewed California Democrat Adam Schiff, the incoming chairman of the House Intelligence Committee, about his reaction to Mattis' resignation. 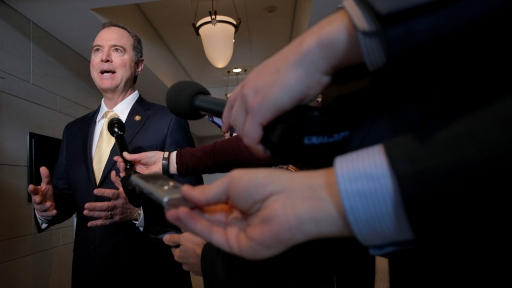 US Representative Adam Schiff, Democrat from California, speaks to reporters before a meeting of the House Intelligence Committee at the US Capitol in Washington, DC, in a March 8 file photo.

Adam Schiff: Well, it's devastating. I have great respect for Secretary Mattis. I think he is not only the adult in the room in the administration but a class act, a great thinker, a great military leader and it's an inestimable loss to the United States. And given the circumstances in which it came — when the president was ignoring his advice, among others' — it's just devastating.

Marco Werman: I mean, you called him, "the adult in the room." How do you read this in terms of foreign policy at the White House, this significant statement on differences in belief and principle from such a high-level voice in the cabinet?

We agree that it's a mistake to do this precipitous withdrawal of our troops from Syria, that it will only embolden our enemies: Iran and Russia, the regime of Bashar al-Assad. The president's tweet today that somehow they're unhappy that we're withdrawing is complete and utter nonsense.

But I think when you read Mattis's resignation statement, his letter, it goes well beyond this action and calls attention to how this president has so often attacked our allies and drawn distance between the United States and our closest allies, while embracing these autocratic rulers around the world. This is a grave danger to the country. It's one that I intend to explore when we take over the Intelligence Committee. Our first hearing is going to be on the rise of authoritarianism, something that Secretary Mattis calls attention to in his letter.

You mentioned the drawdown in Syria. We're also hearing from unnamed officials at the White House that the same could be happening soon for Afghanistan. Is this a watershed moment?

It could very well be, although we've felt like we've had many watersheds in the past that didn't prove to be so significant or seismic as we might have thought. I mean, when you look at just today, the defense secretary has resigned. The government is hurtling towards a shutdown. The attorney general — the top law enforcement officer in the nation — has ignored the advice of ethics lawyers. That's just a single day in the Trump administration. But it does seem like the wheels are really coming off the wagon here.

What are you hearing from other lawmakers on both sides of the aisle?

People are, I think, stunned and gravely worried about what this means for our national security. One by one, the responsible people in the administration — and my point of view, there weren't that many to begin with — are leaving or left or fired, and their replacements are simply not the same caliber. Our national security now is in the hands of John Bolton without any kind of countervailing force, and that's not something I'm particularly comfortable with.

Congressman Schiff, what are you waiting to see next? You just mentioned John Bolton. Is there something there?

Well, I guess some waiting to see next whether the president is going to follow through with this troop withdrawal and what other issues there may be to follow. You know, it's certainly going to raise a profound question about who's going to want that job. If someone like Secretary Mattis, someone of that kind of principle, feels that they can't continue to serve in that role, it's going to be harder and harder to attract anyone to fill these positions. But one thing is certain: We are not going to see someone of his caliber again as long as Donald Trump is in the White House.

This interview has been edited for clarity.