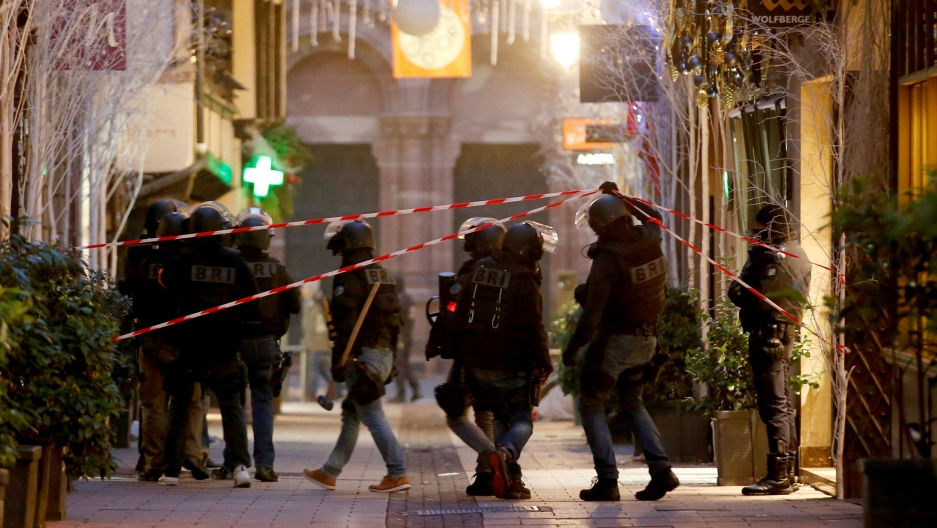 Members of French special police forces of Research and Intervention Brigade (attend a police operation the day after a shooting in a holiday market in Strasbourg, France, on Dec. 12, 2018.

The famous Christmas Market in Strasbourg, France, became the latest place to be struck by terrorists.

On Dec. 12, 2018, a gunman on a terror watch list named Cherif Chekatt yelled “Allahu Akbar” and opened fire on shoppers, killing five people and wounding 11, according to media reports. The attack was labeled terrorism by a Paris prosecutor.

The shooting grabbed headlines around the world. But do such terror attacks actually work?

I am a scholar of international relations. My students and I conducted an analysis of political groups around the world to answer this question.

Comparing terror groups with peaceful ones

We examined 90 political groups to determine whether terrorism works to achieve a group’s goals.

Half of the groups we studied used terrorism to achieve their ends, and the other half used peaceful means.

One example of a peaceful group was the Catalan movement in Spain that held a peaceful vote to support their declaration of independence.

We made sure the groups we designated as using terrorism fit the definition set out by expert Bruce Hoffman, who defines terrorism as “the deliberate creation and exploitation of fear through violence or the threat of violence in the pursuit of political change.”

To choose the 90 groups, we identified 45 pairs of groups operating in the same country or region in relatively the same time period.

For example, in Chile during the rule of autocratic dictator Augusto Pinochet from 1973 to 1990, people organized to end his rule.

We found that only six of the 45 terror groups — that’s 13.3 percent — accomplished their broader goals; the others did not.

Meanwhile, among the 45 groups that chose not to use terrorism, 26 — or 57.8 percent — achieved their objectives, while 19 did not.

Many people see the few examples of when terrorism “works” as evidence that it is an effective long-term strategy.

There is evidence that Israel’s withdrawal was more a result of domestic Israeli politics than anything Hezbollah did. Moreover, the region Hezbollah “controls” in Lebanon is the poorest, most economically backward and politically repressive place in the country, according to a report from The Atlantic magazine. It’s ruled more by fear of the terrorists than any sort of competence such leaders demonstrate to justify their legitimacy. Many Lebanese see Hezbollah as needlessly provoking Israel into attacks on their border.

It’s hard to call this a clear victory for terrorism. Terrorists may be adept at setting off a bomb or designing a suicide vest laden with explosives.

As political scientist Robert Pape points out in his book “Dying to Win: The Strategic Logic of Suicide Terrorism,” they might even occasionally achieve a limited goal, as Hamas was able to undermine the fragile Israeli governing coalition in the next election, with a campaign of suicide bombings.

But when it comes to accomplishing broader strategic goals, such as destroying the entire Israeli state or forcing a complete Jewish evacuation of the West Bank, terrorists usually fail.

Terrorists can threaten modern nation-states into offering minor concessions, such as giving up a small piece of territory, forcing the resignation of a leader or promising to return to the negotiating table, Pape writes.

But nation-states are too militarily and economically strong to be overthrown by terrorists, or to surrender their own aims that they see as vital to national security, according to Pape.

Additionally, terrorists — if they participate in the democratic process — may well be shunned by voters when the fighting stops. Or, instead of achieving those lofty aims, they may achieve a hollow political victory at best, ending up with power over a failed state that could dissolve into anarchy.

Those who claim terrorism works typically point to Israel and the election of terror leaders Menacham Begin and Yitzhak Shamir.

This example ignores that the fact that it took decades for these leaders to eventually come to power, as Israeli voters repeatedly rejected them at the ballot box, in favor of more moderate candidates. For example, Begin lost eight elections before he finally won his first. Only when these former terrorists moderated their positions did they become acceptable to the public.