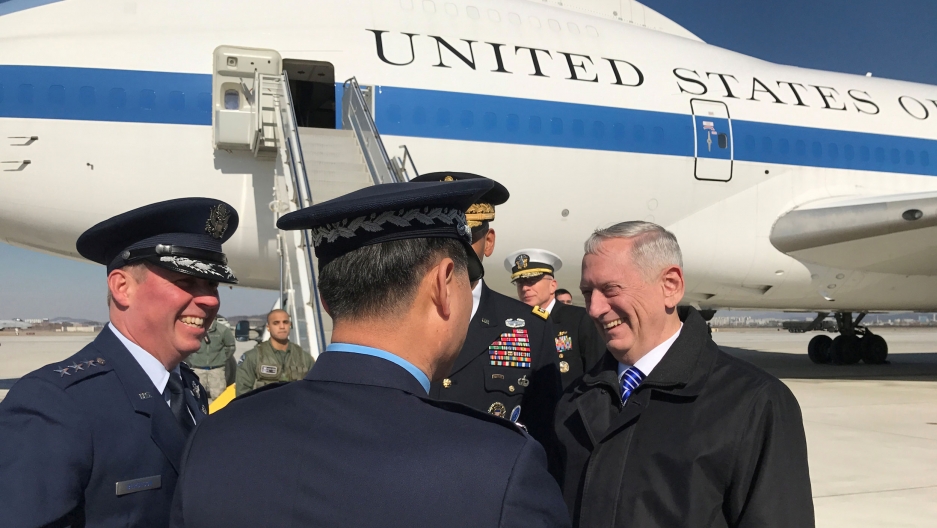 President Donald Trump tweeted Thursday that Secretary of Defense Jim Mattis had resigned and would be leaving the administration in February. Mattis' resignation letter, released by the Pentagon, cited key differences in policy with the president.

The Mattis resignation letter said that he believed the United States "must be resolute and unambiguous in our approach to those countries whose strategic interests are increasingly in tension with ours." He identified Russia and China as countries that "want to shape a world consistent with their authoritarian model." His letter indicated that he disagreed with Trump's isolationist policies, writing that it was his belief the United States needed to maintain strong alliances and show allies respect. (You can read the letter at the bottom of this page.)

The World interviewed Ambassador Nick Burns, a former Under Secretary of State for Political Affairs from March 2005 to February 2008, about Mattis' resignation and his letter. Burns currently teaches International Politics at the Harvard Kennedy School.

Nick Burns: This is a remarkable event. This letter that Secretary Mattis has now posted publicly is a remarkable letter. It's a resignation of protest and a resignation, I think, for principle and he makes two big points in the letter. No. 1, the United States has to respect its allies and work with them closely. No. 2, we have to stand up to Russia and China, both areas in which President Trump has been shamefully weak — probably the weakest president we've had in the modern era in standing up to our foes and working with our allies.

And it's a short letter. It's a letter that's very carefully worded and this is without any question, a resignation in protest against the feckless policies of President Trump and to lose someone like Jim Mattis — he is the strongest member of the cabinet. He's by far the most respected member of the cabinet internationally. He's the one who gave everyone around the world confidence and now he'll be gone. This is a significant blow for the United States.

Marco Werman: What do you make of the timing of this resignation letter, the day after Trump's unilateral announcement of a withdrawal of US troops from Syria?

I think it's without any question linked to this disastrous decision that the president made. This irresponsible decision to suddenly — before we've defeated the Islamic State — pull our troops out. And there is widespread anger throughout the federal government, both in our military, in the State Department, inside the White House and you've seen the reaction among Republicans and Democrats on Capitol Hill.

What do you think this says about the foreign policy in the Trump administration right now?

You know, I think the president has mismanaged our foreign policy. He is not respected around the world. He's seen as an easy mark by people like Putin and Xi Jinping and Kim Jong-un and he's such an odd president because he seemed to embrace the authoritarian leaders and he has been consistently critical of our best friends: Justin Trudeau in Canada, Angela Merkel in Germany, Theresa May and the United Kingdom, Emmanuel Macron in France. I think people just don't know what to make of him around the world.

But as I travel and I've been to six European countries in the last seven or eight months, the Europeans always said, "But Mattis is our guy" and "Mattis understands us" and "Mattis was a NATO commander in his past." And now he's going to be gone by February. And the president's going to have to think hard about two things: who can be convinced to become Secretary of Defense in such an unstable administration where the president, in his cavalier way, treats with a lack of respect his cabinet secretaries and will he will the president understand just how disastrous this Syria decision is and will he reconsider? I doubt he will. That doesn't seem to be in the Trump makeup. He doesn't seem to be an adaptive person but I think he's harming the United States and this week is the demonstration of that.

Nick, you mentioned the language about strong alliances — that Mattis believes in them and he doesn't feel Trump believes in them strongly enough. There's also a paragraph where he talks about China and Russia, coziness between those countries and Trump. "I believe we must be resolute and unambiguous in our approach to those countries." What do you make of that?

But Mattis carefully chose these two issues, and the Russia-China issue is a warning that these are authoritarian states, they're apt to diminish the power of the United States. And we are not responding and if you leave Syria, and you leave essentially the American power position in the Middle East to the Russians and the Iranians, you know you've committed an act that's going to weaken the United States. So I think it's a remarkably composed letter, it's very carefully worded. Two big points and they really point to the weakest aspects of President Trump's foreign policy.

This interview was edited for clarity.