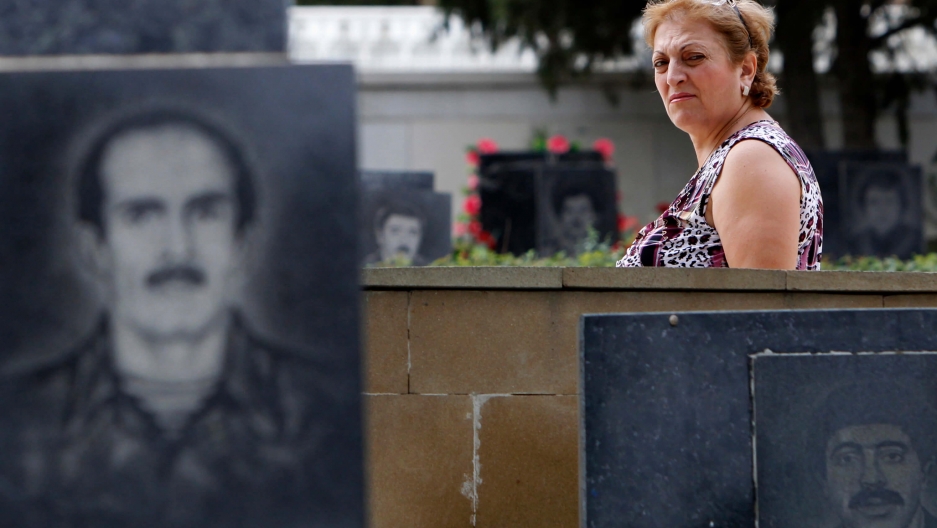 A woman walks past tombstones in the Alley of Martyrs memorial cemetery in Baku, Azerbaijan, Sept. 8, 2012.

The grief and loss tied up in Azerbaijan's bitter Nagorno-Karabakh war with Armenia is central to the political propaganda of Azerbaijan's authoritarian regime.

The conflict over the disputed region erupted as the Soviet Union was nearing collapse, and still simmers today. Over a million Azerbaijanis were displaced, and Azerbaijani President Ilham Aliyev has pledged on a number of occasions to retake the territory that belonged to Azerbaijan during the Soviet era.

But when it comes to compensation, Azerbaijani President Ilham Aliyev appears to have made a promise that his oil-rich state is either unable or unwilling to keep.

Related: Armenian women helped oust an autocrat. But they’re still being left out of politics.

For two months now, approximately 100 mothers of soldiers who died during the devastating Nagorno-Karabakh war have been going from one state institution to another, in search of compensation promised to them by Aliyev earlier this year. They have invariably been humiliated, told to wait, or seek help elsewhere.

Rather than standing in front of a government building, they visited the Martyr's Alley — a cemetery dedicated to the soldiers who lost their lives during Karabakh war — wearing black medical masks with “sus” written in Azerbaijani language, or “quiet."

The mothers believe that they are entitled to approximately $6,450 in accordance with a decree signed by President Ilham Aliyev on April 19, 2018. The decree governs compensation for the families of known 'martyrs' who died or went missing before Aug. 2, 1997.

In total, there are some 3,000 people awaiting this payment. The Ministry of Labor and Social Protection began processing documents in October.

But the state insurance company Azersigorta responsible for making the payments is stalling.

Azersigorta has stated that some of these families already received the money back in the 90s, shortly after the war's conclusion.

Even if that were true — and the mothers deny this — the amounts that families received back then would have totalled no more than $20, a tiny fraction of the president's offer.

The protests began in October soon after some of the families that were seeking assistance got turned down.

One mother in an interview with Meydan TV cited seven letters that she sent to various government institutions and a further 20 letters addressed to parliamentarians. But no one has answered her questions, she says.

Given the importance of Nagorno-Karabakh to the national narrative, the protests have put officials in a tight spot.

MP Hadi Rajabli, a pro-government lawmaker who spoke with the families on Oct. 24, told families “not to stain the step our president has taken with this big undertaking.”

The response of one of the family members, was furious: “We are not staining anything, it is the civil servants who are doing this,” she was quoted by Meydan TV.

Posted by HamamTimes on Tuesday, November 27, 2018

Another mother speaking in an interview with the Facebook-based Hamam Times demanded civil servants stop lying.

Why are they lying?! They have cars worth millions, they have wedding halls, they make money from construction and sale of lands, how do you think they do all of that?! By stealing people's money. State money isn't for them, it is for the people. People should be able to remove them from their seats.

Another MP, Fazil Mustafa sided with the families:

A third lawmaker, Fazail Agamali, proposed a sale of the properties of Jahangir Hajiyev, former director of the International Bank of Azerbaijan from 2001 to 2015, to raise money for the compensation claims.

Hajiyev is currently serving a 15-year prison sentence for defrauding the state to the tune of several billion dollars.

Related: Allegations of corruption surface around the Trump Tower in Baku, Azerbaijan

The speaker of the national parliament, Ogtay Asadov, has signed an order to create a commission to investigate the situation surrounding the compensation conflict. But that was in October and nothing yet has come from it.

Azerbaijani police, known for taking an aggressive approach to protesters, have so far left the demanding mothers untouched.

Men, however, are still fair game.

On Dec. 11, Togrul Gojayev, the son of a martyr, was arrested for allegedly disrupting public order when he demanded to speak with authorities and was sentenced to 30 days in administrative detention.

The sentence was reduced to 15 days during a Dec. 14 court hearing.

Arzu Geybullayeva is a contributing writer with Global Voices.