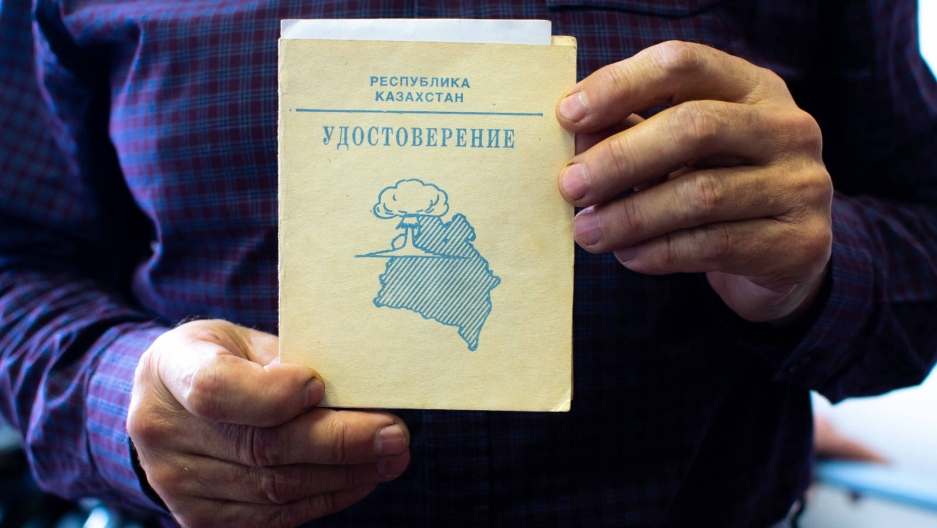 A blueish-purple mushroom cloud decorates the front of a "radiation passport." The small, beige documents were issued by the Kazakhstan government based on where villagers resided, and whether or not they were exposed to significant levels of nuclear radiation.

On a bright, bitterly cold day in early November, Aigul Suleimenova went home during her lunch break to check up on her daughter, Assee, who has a condition that weakens her nervous system.

“She was born like that,” Aigul said. Assee, now 29, spends her days in a wheelchair and is under constant supervision.

The Suleimenovas live in the industrial city of Semey in eastern Kazakhstan, home to several food-processing and textiles factories. Aigul works as a security guard at a bread factory.

Many of Semey’s residents, like Assee, are disabled or suffer chronic illnesses. When Aigul brings her daughter to social events for disabled children, she notices that those who have lived in Semey or nearby villages in eastern Kazakhstan have health issues that all seem to point to a single cause — the Polygon.

In the nuclear arms race against the United States, the former Soviet Union performed more than 450 nuclear tests in an area known as the Semipalatinsk Test Site — otherwise known as the Polygon — from 1949 to 1989. Although the test site itself was uninhabited, winds blew the nuclear fallout and radioactive dust into neighboring villages, affecting anywhere between 500,000 to 1 million people.

Some died immediately from the exposure to nuclear fallout, though the exact number is unknown. Exposed women of childbearing age gave birth to children with physical deformities and other neurological defects. Adults developed a range of fatal cancers.

The Polygon shut down in 1991, the same year that Kazakhstan gained independence from the former Soviet Union. Nursultan Nazarbayev, who has served as Kazakhstan’s president since then, seemed eager to move the country away from its nuclear history. He decreed the permanent closure of the test site and asked more than a dozen civilian and military experts to devise a cleanup and conversion plan.

The following year, in 1992, the government sought to help families who were exposed to the Polygon tests. Government officials traveled to villages close to the test sites and handed out ‘‘radiation passports."

A blueish-purple mushroom cloud decorates the front of the passport. The small, beige documents were issued based on where villagers resided, and whether or not they were exposed to significant levels of nuclear radiation. Asee Suleimenova, along with others born at that time, were all issued such documents.

The government officially recognized 1,323,000 people as being negatively affected by these nuclear tests but only 1,057,000 received radiation passports. By law, those with passports were entitled to compensation and other social benefits — such as higher pensions and additional paid holidays; children under 18 were entitled to free healthcare — based on their individual health conditions.

Many first-generation Polygon survivors said the law worked in their favor at first. But as Kazakhstan moves further away from its nuclear past, survivors and their descendants can’t help but wonder: has the government forgotten about them? 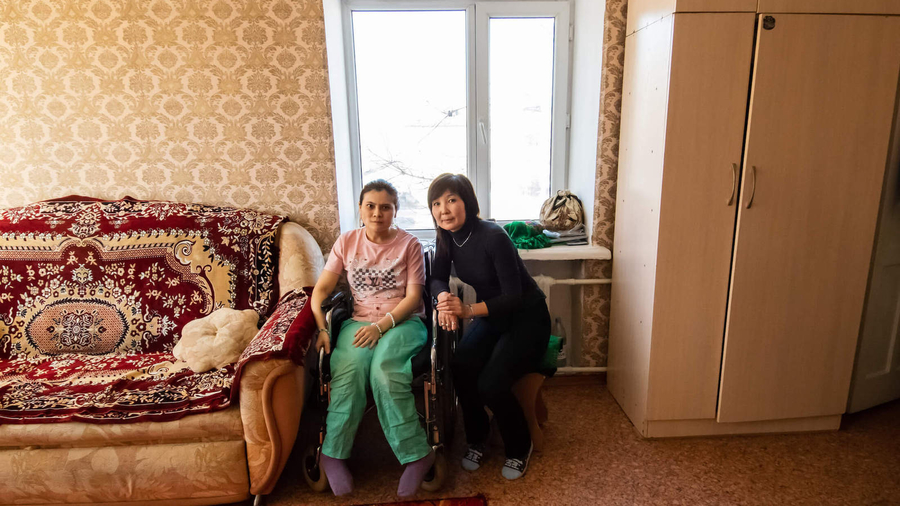 Aigul Suleimenova (right) sits with her daughter, Assee, in their apartment in Semey, Kazakhstan. Assee has a condition that weakens her nervous system. “She was born like that,” Aigul said. Assee, now 29, spends her days in a wheelchair and is under constant supervision.

A law that needs revisiting

Polygon survivors say they feel the law is insufficient. Aigul is hardly making ends meet — she not only cares for her disabled daughter but also her aging mother, who believes the Polygon tests caused her breast cancer. Aigul’s family is originally from Zhana-Semey, a village affected by the Polygon tests just south of Semey. The family is also plagued by joint and cardiovascular issues that they believe stem from the nuclear tests.

Aigul’s job at the bread factory only brings in about $110 a month. In addition to having the social benefits associated with the passport, they are also registered as a disabled family. This entitles the Suleimenovas to a monthly allowance of approximately $145 — which isn't enough because of Assee’s expensive medications. Aigul said that they have applied for subsidized housing from the government — a service that could greatly reduce the financial burden — but have yet to receive it.

Moving away from villages affected by fallout also means a change in compensation and social benefits. 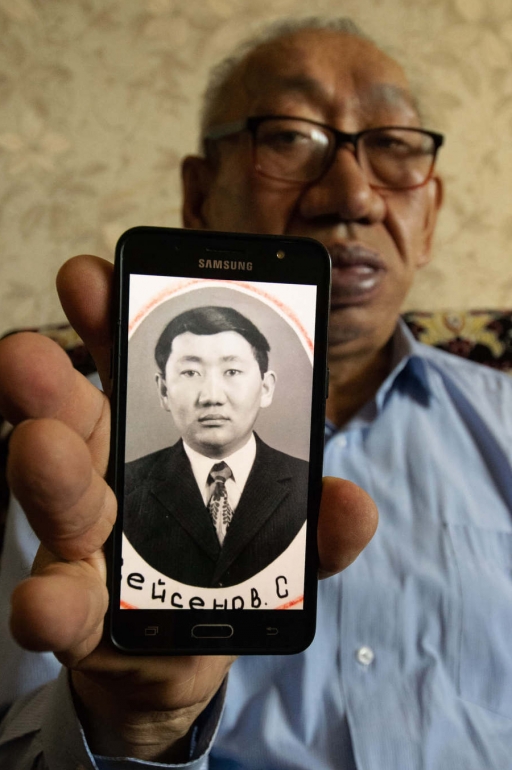 Sakon Seisenuly, 67, witnessed nuclear testing in his village of Sarzhal. He suffers from several health conditions linked to the affects of the nuclear tests. Here, Seisenuly holds a photo of himself at 22.

Sakon Seisenuly witnessed nuclear testing when Soviet soldiers went from house to house in Sarzhal — a village on the southeast border of the test site —encouraging families to evacuate buildings to avoid the danger of collapse during the tests. Seisenuly, now 67, remembers going outside with his five siblings and covering themselves with blankets as the first explosion went off in the distance. But 10 minutes after the first test, there was a second one.

“We were kids. We were curious, so we looked,” he says.

Peeking out from under the blankets, he saw the mushroom cloud.

Seisenuly attributes much of what’s happened to his health as a result of the Polygon tests.

Since he saw the flash of light, he went blind in his right eye. After three operations, he was left with partial vision. His skin has darkened as a result of the nuclear tests and his fingers and toes have swelled. He’s lived with an operable tumor in his pituitary gland for the last 25 years.

“The doctor told me there wouldn’t be guaranteed success with the surgeries to remove it, so I didn’t do it,” he says. “Everything you see on my body is a result of those tests. I never had a normal life.”

Seisenuly moved from Sarzhal to Semey seven years after receiving his radiation passport in 1992. Semey is about 100 miles from Seinsuly’s home, and for him, it was a relief to move from land contaminated from nuclear fallout.

Today, his medications fill three large Ziploc bags — each stuffed full of different drugs — and cost about $270 a month. When his doctors increased the dosage of his medications, his out-of-pocket expenses skyrocketed. He relies on financial support from his son and daughter-in-law to maintain a quality life.

As the costs of medical care continue to rise, he said he thinks the state has neglected victims of the Polygon tests. People from the Sarzhal, for instance, applied for allowances, but because he no longer lives in contaminated land, he isn’t entitled to the same benefits.

“Here, we only receive an additional payment of 3,000 tenge a month (less than $10) for suffering from the environmental impact [of nuclear testing],” he says. “It’s not even significant.”

One generation after another

Nuclear radiation damages DNA, the building blocks of genes — researchers say that some health conditions caused as a result of the nuclear fallout might be passed down from generation to another.

To receive social support from the state, one must have a radiation passport. But the government stopped issuing radiation passports after 1992, which means the passport program excludes children who have been born to affected families since then.

Now, some families that were affected by the nuclear tests are giving birth to a fifth generation, says Talgat Muldagaliev, deputy director of science and research at the Institute of Radiation Medicine and Ecology. Now that research has slowly emerged proving that some health conditions have a genetic basis, "we expect that laws for social protections will be revised and amended so that all generations of people who could have possibly been affected by these nuclear tests will receive better social support," Muldagaliev said.

Olga Petrovskaya, the chair of Generation, a Semey-based nongovernmental organization founded in 1999, also hopes the government will begin to pay attention to Polygon test survivors after years of neglect. She and members of Generation are working to petition the Kazakhstan government for increased social protection because they believe the law initially set in 1992 is no longer benefiting them.

“It was good for the first two years, but then the benefits started going away,” says Petrovskaya.

Kazakhstan's turbulent economic situation as it transitioned in the 1990s may explain why the government was unable to fulfill its obligations to provide compensation to those affected by the nuclear tests. 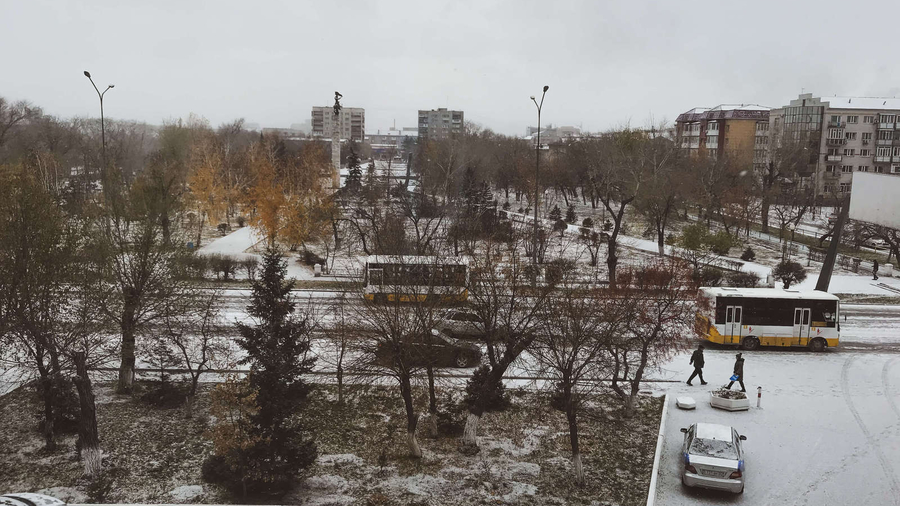 Semey, an industrial city in eastern Kazakhstan, is home to a number of food processing and textile factories. Many of the residents there suffer from chronic illnesses caused by the Polygon nuclear tests that affected nearby villages.

Petrovskaya says they have raised their concerns with the Ministry of Health in Kazakhstan.

“We’re trying to show them that the impacts of nuclear testing are still very serious,” she says, as a means to increase the social and medical benefits — yet to be determined — for Polygon test survivors.

For Aigul, government assistance of any kind for those still suffering from the nuclear fallout would bring significant relief.

“We wake up every morning with hopes for a happy and healthy life,” she says.