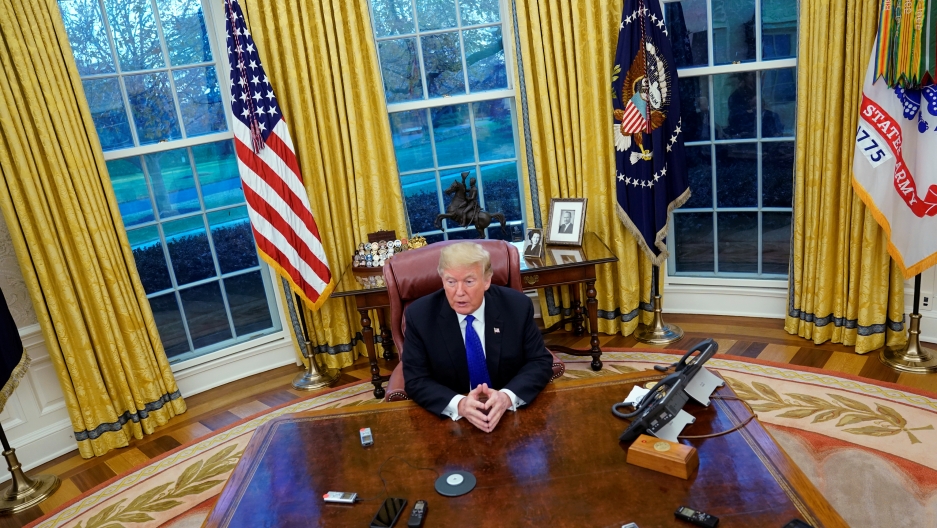 President Donald Trump answers questions during an exclusive interview with Reuters journalists in the Oval Office at the White House in Washington, DC, on Dec. 11, 2018. Asked about his past business connections with Russia, Trump said, "The stuff you’re talking about is peanut stuff.”

President Donald Trump was asked — again — about his business connections with Russia, in an interview on Tuesday.

Federal prosecutors have asserted that a number of people who had worked for President Trump also met with or had business dealings with Russian nationals before and during the 2016 presidential campaign. Reuters asked Trump about this.

And the President said, “The stuff you’re talking about is peanut stuff.”

Over the last couple of years, Trump has said he has no loans with Russia, no deals with Russia, and no dealings with Russia. And he often repeats some version of the phrase, “no collusion.”

But special counsel Robert Mueller apparently wants to know more, specifically about Trump’s business history in Russia, his business connections with Russian nationals and alleged discussions during the 2016 campaign about a possible meeting with Russian leader Vladimir Putin.

The year 1983 is when the story of the Trump-Russia business connection begins. It was the same year that the brash young real estate developer put his name on a new building in midtown Manhattan.

“There are two sides to Trump Tower,” says Seth Hettena, author of “Trump/Russia: A Definitive History.” “The glitzy celebrity side, occupied by Johnny Carson and sports figures and media people, but it also had this seamier side.”

“Trump Tower was the second building in New York to allow shell companies to purchase an apartment,” he says.

Among the shady characters who bought apartments at Trump’s first marquee New York City property in those early days were a Haitian dictator, an Italian fugitive wanted for financial fraud, and a Russian mobster named David Bogatin.

“[Bogatin] was running a very lucrative gas tax scam with the Colombo crime family in New York. He had a huge pile of money,” Hettena says. “Trump had found him and got him to buy these apartments in Trump Tower, and that is where it all started.”

Trump made his first trip to Moscow in 1987, with the aim of scoping out possible real estate deals there. And this made perfect business sense for someone like Trump, says Ben Aris of BNE Intellinews.

Aris has been writing about financial news in Russia for 25 years. He says there was real buzz about the former Soviet Union at that time as a potential gold mine for international business.

“It’s an extremely rich country because it has every mineral known to man, in large amounts, including, obviously, oil,” Aris says.

And secondly, Aris says that business people were intrigued by the country because it had a population of 200 million people before the dissolution of the USSR.

“It’s an enormous consumer market, which because of communism was totally untapped,” Aris explains.

But Trump’s dreams of quick business success in Moscow was not to be. Private wealth was still outlawed there. And public millionaires, people like Donald Trump, were still portrayed by Soviet propaganda as fat cat enemies of the people.

The 1990s were different. The Soviet Union collapsed. The Russian economy started opening up to foreign investment. Trump returned to Moscow in 1996, hoping to do a big real estate deal.

Aris says there was a great deal of money to be made in Russian real estate in the '90s. But Trump didn’t have the right connections.

“The game was to get hold of a property and a lot of the really sexy property was owned by some state organization, and in order to get that transferred — to be able to buy it, or privatize it — you needed connections,” Aris says. 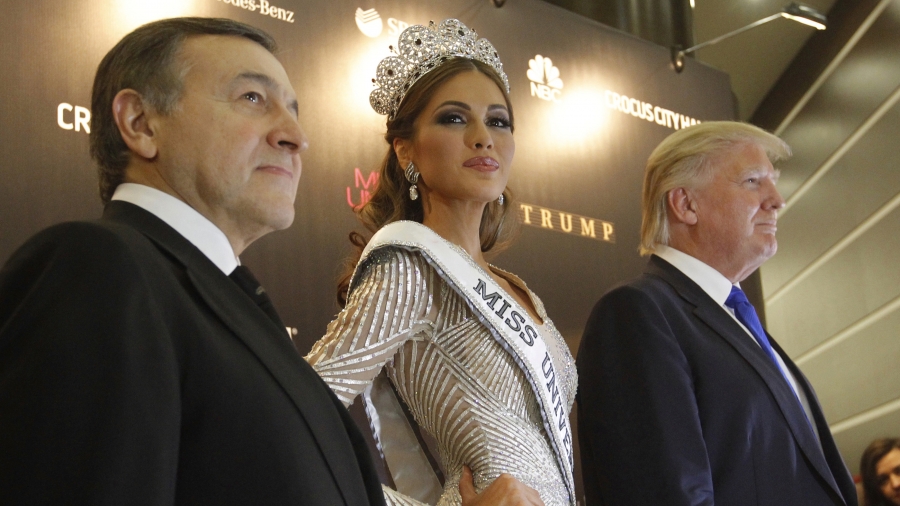 It took several more years, but Trump did end up doing a Moscow deal. He brought his Miss Universe pageant there in 2013.

“It’s an amazing country with, you know, so many friends in Russia. And I’m very excited to be here,” Trump said in one interview at the time.

Another thing Trump was apparently excited about: finally inking a real estate deal in Moscow. And again, he failed.

“Trump, as far as I know, didn’t do any real estate deals in Moscow. He was really a bit player,” Aris says. “But he did have connections with people in the real estate business in Moscow.”

These kinds of Russian connections became central to Trump’s businesses back in the US, says author Seth Hettena. For example, The Taj Mahal casino in Atlantic City which was originally owned by Trump,  was a magnet for Russian money, including Russian mafia money, Hettena says.

“The Taj Mahal was notorious for having virtually no money laundering controls," he says. "Casinos are fantastic places to launder money because you can walk in with a bag of cash and turn it into chips and then have your accountant declare it as casino winnings. Trump made that happen. The casino was repeatedly cited throughout its history for having lax or almost no controls on money laundering.”

But what does all of this have to do with Trump’s relationship with Russian leader Vladimir Putin?

Ben Aris, the Moscow-based writer, says there seems to be a lot of hyperventilating around this question.

The idea that Trump was working toward some sort of secret alliance with Putin simply doesn’t make sense.

“[Putin] is interested in players like the head of Goldman Sachs, who he actually talks to," Aris says. "The head of Deutsche Bank was a good friend of his. The head of Siemens is someone else he entertains. But these are companies and financial organizations that have strategic implications for Russia. Trump has none of that. He’s a deal maker. He wants to come in and make a fast buck. So, to Putin, that’s of no interest."

No interest, as long as Trump is just a businessman. And, of course, he’s much more than that now.

The question on many minds, and perhaps Mueller’s too, is this: Why did Trump side with Putin when the two men held a joint news conference in Helsinki in July?

But author Hettena sees things differently. For him, Trump’s long history of cultivating Russian business connections helps explain why this American president is so willing to give Putin a free pass.