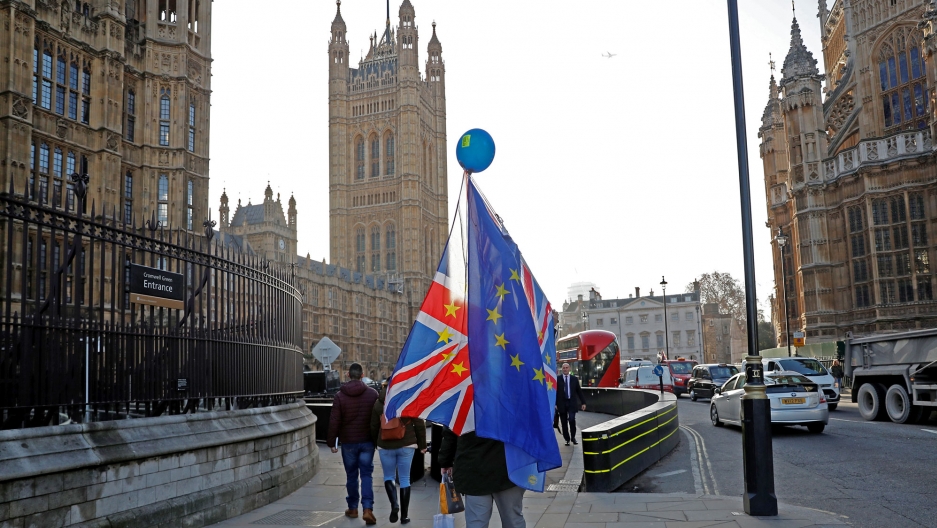 An anti-Brexit protester carries flags past the Houses of Parliament in London, Britain, Dec. 11, 2018.

The European Union ruled out renegotiating the Brexit divorce treaty or its Irish border protocol with a clear message to Britain's Prime Minister Theresa May, it will give clarifications but not countenance reopening the treaty.

The announcement came on Tuesday as May sought last ditch assurances from the bloc to save her deal after pulling a vote she acknowledged she would lose.

Less than four months until the United Kingdom is due to leave the European Union on March 29, May finally accepted that British lawmakers would reject her deal. But she said the only other options were a disorderly no-deal divorce, or a reversal of Brexit that would defy the will of those who voted for it.

In a bid to save her deal, May sought support from Dutch Prime Minister Mark Rutte, whom she met in The Hague for breakfast on Tuesday. Rutte called the dialogue "useful." She will later meet German Chancellor Angela Merkel in Berlin.

"The deal we achieved is the best possible. It's the only deal possible. There is no room whatsoever for renegotiation," European Commission head Jean-Claude Juncker said in an address to the European Parliament in Strasbourg.

The most contentious issue has been the Irish "backstop," an insurance policy that would keep Britain in a customs union with the EU in the absence of a better way to avoid border checks between Northern Ireland and EU member Ireland. May's critics say it could leave Britain subject to EU rules indefinitely.

Juncker said neither side intended for the backstop ever to take effect, but it had to remain a part of the deal.

Germany's European Affairs Minister Michael Roth said the EU did not want Britain to leave but added that substantial changes to the withdrawal agreement would not be possible.

"Nobody wants the UK to leave," Roth said. "I cannot imagine where we could change something substantial in the withdrawal agreement."

May, due to meet Juncker and European Council President Donald Tusk later, said she would seek further assurances and ways to give British lawmakers powers over the Irish backstop. The British parliament will vote on the deal before Jan. 21, May's spokeswoman said.

As investors and allies tried to work out the ultimate destination for the world's fifth-largest economy, rebel lawmakers in May's party said she had to go.

"If we can't go forwards with her deal ... then I'm afraid the only way to change the policy is to change the prime minister and I really think it's her duty to go," Brexit-supporting Conservative lawmaker Steve Baker said.

A leadership challenge is triggered if 48 Conservatives write letters demanding one to the chairman of the party's so-called 1922 committee, Graham Brady.

May pulled a parliamentary vote on her deal the day before it was scheduled to take place on Tuesday, prompting ridicule, calls for a national election and blunt warnings her eleventh-hour bid for changes was in vain.

She said the deeper question was whether lawmakers wanted to deliver on the people's will from the 2016 referendum, or open up divisions with another national vote.

With little hope of substantial changes from the EU, though, the options open to Britain range from a chaotic Brexit with no deal to risking the wrath of pro-Brexit voters by calling the whole thing off.

Both May's ruling Conservatives and the main opposition Labour Party have pledged to implement the results of the 2016 referendum in which British voters backed exiting the EU 52 percent to 48 percent.

Three out of four living prime ministers and a growing chorus of backbench lawmakers say a new vote is the only way out of the impasse. Among Brexit opponents there is mounting enthusiasm for a chance to have another say.

Many business chiefs fear a chaotic Brexit that they say would wreck their supply lines and hammer confidence in the British economy.

"We view the situation with a mixture of worry and hope," one CEO said of a FTSE-listed company said on condition of anonymity. "The hope comes from the fact that it's now such chaos it gets called off."