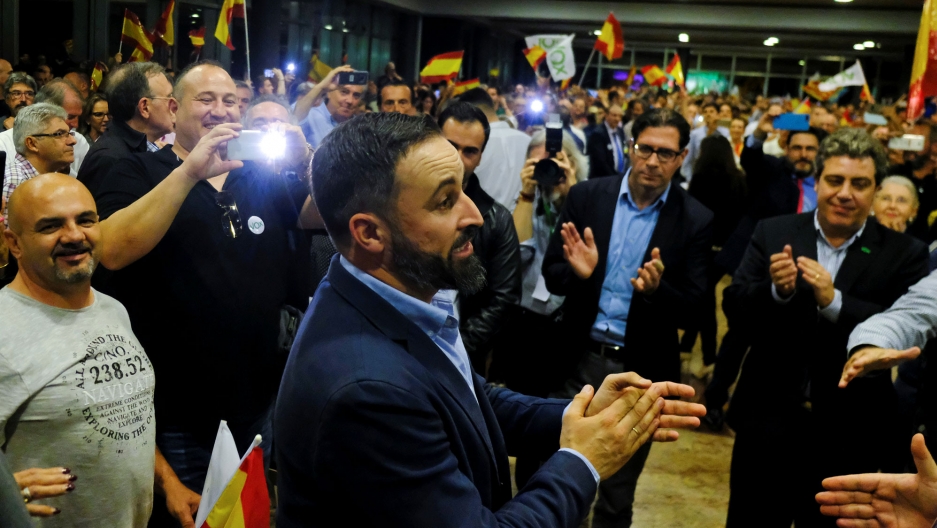 On Dec. 2, a far-right party burst into Spanish politics for the first time since the country’s return to democracy in 1978, gaining 12 seats in Andalusia, Spain’s most populous region. Along with an extreme, anti-immigration agenda and pro-Spain stance (anti-Catalan independence), Vox strode in on an “anti-radical-feminist” platform — “radical feminism” being an attempt by women to subjugate men, according to party leaders.

Chief among Vox’s anti-feminist measures, as provided in a 100-point program, is the repeal of a 2004 Gender Violence Law designed to better protect women from domestic violence and better prosecute offenders. The party also calls for the dissolution of federally funded feminist organizations; the creation of a Family Ministry in lieu of the current Gender Ministry; and removing sex change and abortion procedures from public health services.

One Twitter user sounded the alarm with the following tweet: “Andalusian women: welcome to The Handmaid’s Tale. #AndalusianElections.”

Until now, Spain had been one of the only European countries to withstand fascist incursions. While many ascribe Vox’s rise to unionists’ anger over Catalonia’s push for independence and a perceived surge in immigration, some suggest a reinvigorated feminist movement in Spain may also have played an important part.

“It’s a reaction (and by that I mean a reactionary one) to the advances feminism has made in our society,” human rights lawyer Carla Vall i Duran said via email. “At this time when chauvinists can feel under attack, they’re betting on a fight against those rights.”

When Spain’s socialist government — made up of a majority of women, for the first time in the country’s history — took office last June, it declared that theirs was “a feminist cabinet." They restored the previously disbanded Gender Ministry and made “gender equality” its no. 1 priority. More concretely, the government vowed to implement a piece of legislation titled, the State Agreement, a comprehensive framework that builds on the 2004 Gender Violence Law.

Vox’s leader, Santiago Abascal, claims the Gender Violence Law has done away with the concept of the presumption of innocence and unfairly targets men. In a recent media interview, he explained, “It’s an ideological law that’s not solving the problem. The only thing it’s doing is provoking a proliferation of false accusations. Men are being criminalized, and that’s what we’re fighting against.

Vox’s Andalusian candidate, Francisco Serrano, a family court judge, is especially vocal about what he sees as men’s unfair penalization. In 2011, he was briefly suspended for allowing a father to see his son in violation of a custody agreement.

“I wonder: why won’t these opportunistic, transgenic radical feminists go to Muslim countries to defend the rights of women there?” Serrano tweeted in August of 2016.

“Serrano was known for his tendency to belittle women’s voices in court and favor fathers, even when these couldn’t take care of the children,” Vall i Duran said.

She adds that what she describes as a “neo-chauvinist” movement in the legal sphere is dedicated to protecting men in cases of gender violence. “That’s why our motto is, ‘The Wolf Pack is the system.’”

The “Wolf Pack” was the name of a group of friends accused of raping a young woman at Pamplona’s Running of the Bulls two years ago. The ensuing trial, known as the Wolf Pack case, was steeped in controversy, from the defense’s victim-blaming tactics to the verdict this past April, which acquitted the men of rape and found them guilty of the lesser crime of abuse. Women throughout Spain revolted in what became known as the country’s #MeToo moment. Simultaneously, in some pockets of the anonymous internet similar to 4Chan in the US, men rallied behind the convicted Wolf Pack, insisting the plaintiff had falsely accused them and demanding that she be punished.

The sentence was upheld in a regional court last Wednesday. Women, who’d hoped for a rape conviction this time around, protested across Spanish cities again.

Vox’s anti-feminist rhetoric predates the Wolf Pack reaction and Sanchez’s feminist cabinet. (The party was founded in 2013.) But, according to human rights lawyer Violeta Assiego, the party may be capitalizing on many men’s anger and discomfort at a sudden surge in feminism.

“Vox is, effectively, an anti-feminist party,” Assiego said. “I don’t think their success is a reaction to the current government’s feminist platform per se, but yes, I do think they’ve used an anti-feminist leader to … win many votes.”

Vox’s eruption into Andalusian politics ends the socialist government’s 36-year reign there, as it will unlikely be able to form a majority with its left-leaning allies.

One of Assiego’s principle concerns is that conservative parties will adopt more extreme postures in a bid to capture far-right votes. “It’s possible we’re facing a polarization of agendas,” she said.

Vox’s agenda is typical of the populist far-right. It’s pro-Spain — or against regional bids for autonomy or independence; anti-gay marriage; anti-immigration; and anti-Islam. It also wants to build a wall — on the border between the Spanish enclaves of Ceuta, Melilla and Morocco.

The party unironically calls for the Reconquista of Spain — referring to the period in history when Christian Spain retook lands conquered by North African Moors. In a November campaign video, Vox’s head, Santiago Abascal, and a band of men (no women are featured) stride across the Andalusian plains on horseback to the tune of “The Lord of the Rings” theme song.

Thousands of Spaniards staged anti-fascist protests across Andalusia last week. Feminists have taken to the press and social media saying it's time for a resistance, much like their counterparts did in the US following Donald Trump’s election in 2016. Assiego penned an editorial, “Now’s the time to face off against Vox,” and the group, Feminist Gitanas, tweeted the following:

“Faced with the advance of fascism, we must make alliances, now more than ever. Intersectional, anti-racist feminism will be a wall against hate and intolerance. Vox wants to eliminate women, migrants, gitanas, black women, muslim women, and LGBTI. Let’s unite in a common front!”

Spanish mayoral and EU parliament elections are both coming up in May 2019.