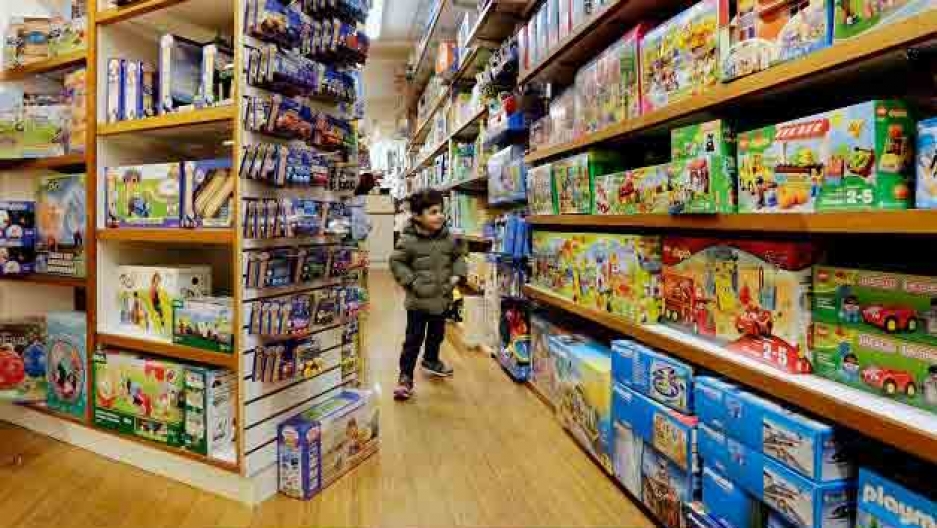 A young customer checks out the merchandise at Mary Arnold Toys in Manhattan's Upper East Side. So many of children's toys are made from hard plastics.

A few months ago, Cullen Potter graduated from the University of South Alabama Children’s and Women’s Hospital’s neonatal intensive care unit. Born at 13.9 ounces, Cullen spent his first five months in an incubator, hooked to a ventilator, an IV bag and a feeding tube, which supplied him with enough oxygen and nutrition to survive and grow. Aside from the soft blankets he laid on, Cullen spent his first few months entirely surrounded by plastics.

“Neonatology, like much of modern medicine, owes a huge debt to the advent of plastics,” says Susan Freinkel, the author of "Plastics: A Toxic Love Story." In the book, Freinkel chronicles the history of plastics and explores how the material has changed — and even saved — so many lives.

Up until the 1950s, Freinkel says that most medical equipment in hospitals was made of glass. Even blood used to be collected and stored in glass bottles, which Freinkel says wasn’t the greatest system.

“IV bags [were] a dramatic and huge innovation,” she says.

Unlike glass, these flexible blood bags were durable and malleable. But the biggest selling point, according to Freinkel, was that they were made from vinyl, which doctors presumed to be a chemically stable material that wouldn’t damage blood cells.

“The new technology revolutionized the way blood was used,” says Freinkel, and it has been employed by hospitals and the US military ever since.

But in the 1970s, concern grew about vinyl’s health consequences. Epidemiological studies suggested that the material contained a chemical — vinyl chloride gas — that was dangerous and potentially deadly. Rolling Stone magazine named one of the factories where the material was manufactured “a plastic coffin.” Despite growing mistrust, Freinkel discovered that, because there was no federal mandate against it, most hospitals continued to use vinyl for years afterward and some still do.

The problem, according to Freinkel, isn’t that there is one sinister chemical in plastics, but a stew of unvetted substances that we’re marinating in.

“But it’s difficult for individuals to encase themselves in a world where they’re not exposed to this stuff,” she argues.

Indeed, plastics do have a valuable place in our lives. Freinkel says that they’ve helped us design colorful worlds and develop new technologies. They’re light, cheap, and at this point, we can’t live without them.

Despite the recent backlash against plastics and various bans, Freinkel says, “We can ban every single plastic straw [or] bag in existence today, and that’s an infinite fraction of all the plastic that is out there.”

Instead of abandoning plastics, she suggests we find more efficient strategies to recycle and reuse them.

“This is stuff we’ve made from fossil fuels and scraped from the ground at great expense, effort, and political debate. And it just seems stupid to waste or landfill it.”