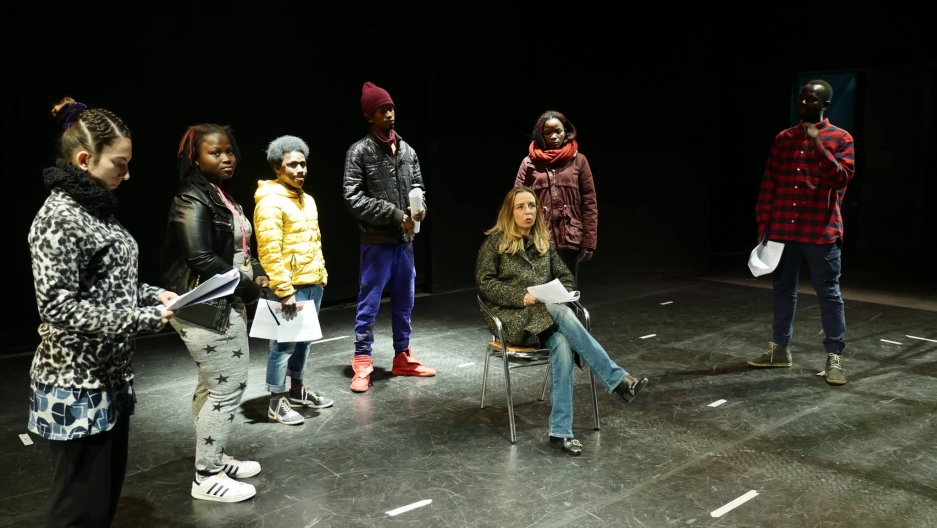 Emanuela Pistone sits inside her colorful office, with Middle Eastern music playing in the background. She twists one of her red curls as she finalizes a funding application.

“It’s lots of sacrifices, but I owe these kids my life,” she said, smiling.

Pistone is a theater actress and director based in Catania, Sicily’s second-largest city. In 2013, she founded Liquid Company, a unique theater troupe in Italy made up of young migrants, refugees, asylum-seekers and unaccompanied minors, all united by one common experience: They each crossed the Mediterranean to reach for a new life.

Sicily, an island in the central Mediterranean and Italy’s southernmost region, has been a major migration hub during the refugee crisis. According to the International Organization for Migration, 30,300 migrants reached Europe by sea in the first half of 2018, with about 40 percent of them landing in Italy. Pistone, after almost two decades in Rome, came back to her hometown around the time the Arab Spring began — uprisings that would lead migrants from the Middle East and North Africa across European borders.

“After years of absence, I didn’t expect to find such a reality of migration crisis upon my return. I decided to actively participate in the relief process, to offer my skills to help alleviate the sorrows of young migrants,” Pistone said.

She began volunteering with protection-seeking, unaccompanied minors while also founding Isola Quassud, an art workshop offering amateur theater and literature classes with a focus on African stories. (Isola Quassud is a pun that roughly means "island up there but south.") 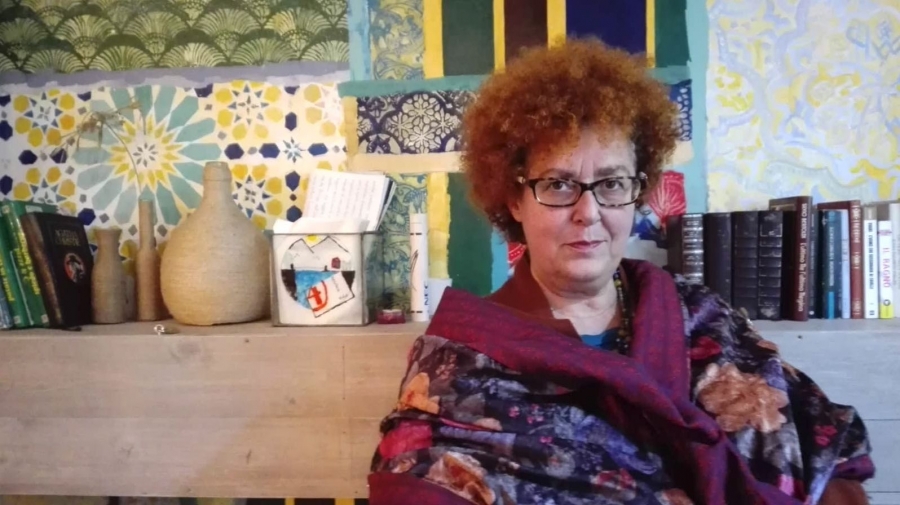 Then, two events in 2013 renewed Pistone’s commitment toward the refugee crisis, pushing her to do something more impactful: deadly shipwrecks on Aug. 10 and Oct. 3 off of the Sicilian coasts. Both boats were carrying migrants from Africa.

In response, “I organized a small theater representation [short performances] in a school, where both my Isola Quassud workshop students, mostly longtime migrants, and the new arrivals after the shipwrecks, met and collaborated, as a distraction from the tragedy and consequent traumas. They enjoyed the experience to the extent that we decided, together, to transform that single episode into something more enduring,” she said.

Liquid Company, named for Polish sociologist Zygmunt Bauman’s concept of "liquid society" in the postmodern era, was officially born two weeks after the Oct. 3, 2013, shipwreck. In the past five years, the 15-member, multicultural group has staged four, original plays tackling themes of illegal sea crossing, human trafficking, navigating the asylum protection system in Italy and the hopes and struggles of refugees.

The idea, Pistone said, is to humanize their stories rather than reducing them to data. Likewise, for the migrant actors, whose ages range from 17 to 28, the stage is a platform to share about their risky journeys with a Western audience. Their original stories, poems and music are woven into the scripts, which are written collaboratively. Usually, their shows take the form of an experimental drama — sometimes with few words or objects, like in "Blu profundus" which in Latin means "Deep Blue," a reference to the Mediterranean Sea.

Or in "Life is Beautiful":

“I was left stranded at a community center for weeks after I landed. I had lots of free time, so much time I didn’t even know what to do with it. So, I decided to get involved in this activity instead of hanging around, waiting,” said Mithat Mounir, a 21-year-old Egyptian survivor of the Aug. 10, 2013, shipwreck, and a founding member of Liquid Company.

Mounir said the stage is a safe space where migrants are free to express themselves — without the authorities asking for their documents and away from overanalysis from cultural mediators and psychologists.

"I'm grateful to have found such a unique space [helping me] cope with the same kind of emotions I share with other members of the company," he said.

Mounir said that he discovered a whole new world with theater, which lets migrants like him take back their voices and be the builders of their own narratives.

“I love how certain characters I embody have an impact on the audience and represent my journey as it was, far from media depictions of something they haven’t experienced [in] their own skin.” 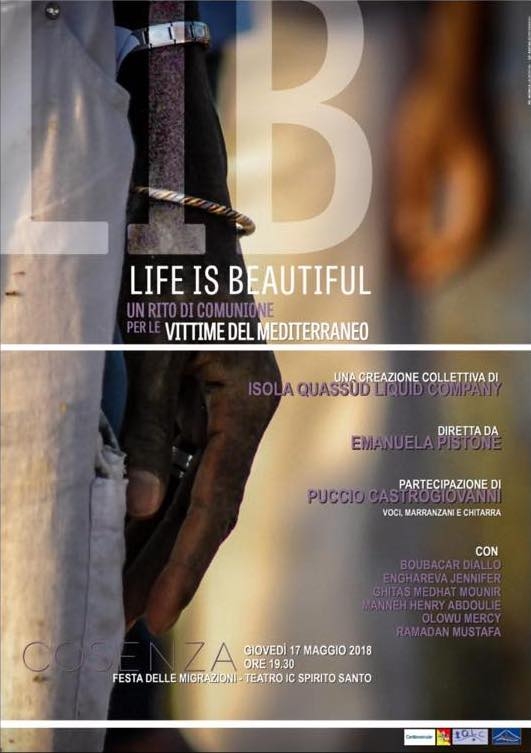 Meninet Yrghalem Teferi, a Liquid Company actress since 2014, who is from Eritrea, echoed his enthusiasm — though she was skeptical at first.

“I used to go because I thought it was going to be a not-so-binding hobby, but then the more time passed, the more I realized this was becoming more interesting than expected, that we were becoming a very diverse family,” said Teferi. Slowly, the Friday night meetings at Isola Quassud became her favorite commitment of the week.

Stefania Di Pietro, 28, watched one of Liquid’s shows for the first time in 2016. Passionate about performing arts and curious about learning firsthand what it means to be an asylum-seeker escaping poverty and conflict, she pledged to get involved, too. To date, she’s the only Italian actress at Liquid Company.

“I was able to learn their stories through theater and had the chance to live a historical moment for our generation while being directly on stage. Working to build something together makes us closer and helps us understand their challenges, which we can’t fully grasp by just watching the news from afar,” she said.

However, the troupe has had plenty of challenges. Most of the actors come from countries where women and men don't typically mix like this — and where it's uncommon for women to even appear on stage. It took some time to recruit girls and women to the troupe. Some others have left the company.

The already precarious equilibrium became even more fragile when a small group of Nigerian, underage trafficked girls came to Liquid as part of a social rehabilitation path.

“We were grateful to be a part of this initiative, but then we realized that openly showing ourselves on stage could be a problem for some of us because we couldn’t be photographed during performances or say anything about our background during Q&A sessions. My lawyer, for instance, got mad after my first performance because my real name and face were all over social media,” said Joy Felix, a 20-year-old Nigerian actress who joined Liquid in 2017, now under legal protection.

Still, Felix is glad she joined the group.

“I made lots of new friends and experiences, and enjoy every brief moment of fame at the end of each show when people recognize me and compliment me,” she said.

Despite the difficulties, “the girls who have stayed are strong, and imposed themselves in terms of having the same relevance as men since the very beginning,” Di Pietro said.

“The resilience of these girls really challenged me as a woman. I know women's lives are difficult everywhere, but listening to their stories of torture and sexual abuse unexpectedly shared during stage exercises remains one of the most difficult challenges of my job,” Pistone added.

For Pistone, it hasn’t always been easy, either. Women theater directors are already a rare sight in Italy’s male-dominated artistic environment, and her role has been questioned a few times by Liquid’s male actors.

“The age difference and my maternal approach made it harder to impose myself as a woman leader. Some people left because they didn’t understand that role,” Pistone said.

She said that the amateur actors have saved her life. After her career working with Academy Award winners in Italy’s capital, she thought she was going to spend her retirement days bored and frustrated on the periphery of theater. But she claims migrants are helping Sicily blossom again, including the arts scene, and that the young people she’s met through this project have given her new goals and motivation.

“Everybody thinks I’ve been the one teaching them new skills. It was rather the opposite; they taught me everything about one of the most significant tragedies of our time,” she said.

Furthermore, the migrant actors have changed her perception about the performing arts.

“I’ve always thought about theater as a career. But none of these kids wants to be a professional actor, showing me theater classes can also be a therapeutic outlet to heal from traumas and get rid of emotional weights.”

Today, Liquid Company’s members are preparing for reprisal performances at schools and art spaces in the coming months after a busy summer and fall performing across Catania and as far as Tuscany. They’re brainstorming ideas for new plots and scripts in store for early 2019.