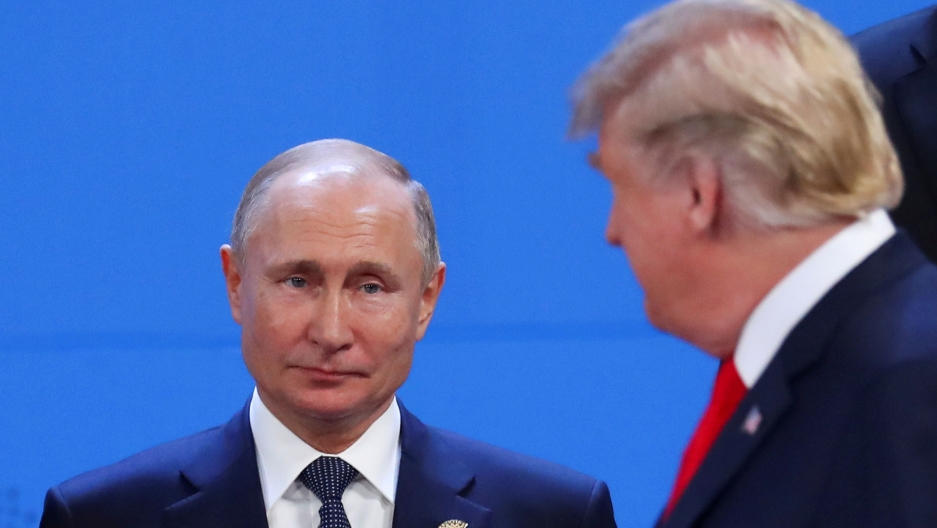 The United States delivered Russia a 60-day ultimatum on Tuesday to come clean about what Washington says is a violation of an arms control treaty that keeps missiles out of Europe, saying only Moscow could save the pact.

Putin, in televised comments, accused the United States of blaming Russia for violations as a pretext for Washington to exit the pact.

Putin noted that many countries produce missiles banned under the INF treaty, but that Moscow and Washington had undertaken to limit themselves with the accord signed in 1987.

"Now it seems our American partners believe that the situation has changed so much that the United States must also have such a weapon. What's our response? It's simple: in that case we will also do this," he said.

NATO allies led by Germany pressed US Secretary of State Mike Pompeo at a meeting in Brussels to give diplomacy a final push before Washington pulls out of the 1987 INF treaty, fearing a new arms race in Europe.

"Russia has a last chance to show in a verifiable way that they comply with the treaty ... but we also have to start to prepare for the fact that this treaty may break down," NATO Secretary-General Jens Stoltenberg told reporters.

NATO foreign ministers agreed to formally declare Russia in "material breach" of the INF treaty in a statement in support of the United States, after Pompeo briefed them at the alliance headquarters in Brussels on Russian violations and on US President Donald Trump's stated aim to withdraw from it.

Germany, the Netherlands and Belgian are concerned about the  deployment of US missiles in Europe — as happened in the 1980s, touching off large anti-American demonstrations — while being caught up in nuclear competition between Moscow and Washington.

A US exit from the INF treaty would put another strain on NATO allies already shaken by Trump's demands for higher defense spending and what diplomats say is a lack of clarity about where US strategy is heading on the issue.

While Stoltenberg said there would now be an intense diplomatic push to try to convince Russia to give up what Pompeo said were "multiple battalions of the SSC-8 missiles," Washington is set to start to pull out in February, prompting a six-month withdrawal period under the accord, diplomats said.

"Its range makes it a direct menace to Europe," Pompeo said of the missiles, which also are called Novator 9M729. He added that Russia's actions "greatly undermine America's national security and that of our allies."

Difficult to detect and fired from mobile launchers, the Russian missiles are especially dangerous because they reduce the warning time that NATO air defenses might have to shoot them down, military experts say.

Pompeo said the US government had raised the issue at least 30 times since 2013 with Moscow but had faced what he said were denials and counter-actions.

He also said that the United States had evidence that the test launches were from a single site in Russia, the Soviet-era base Kupustin Yar, near Volgograd, southeast of Moscow.

"In the light of these facts, the United States declares Russia in material breach of the treaty and will suspend our obligations ... effective in 60 days unless Russia returns to full and verifiable compliance," Pompeo said.

Europe caught in the middle

Washington has said it would be forced to restore the military balance in Europe after the 60-day period but Pompeo declined to elaborate, saying only that tests and deployments of new missiles were on hold until then.

He also said that because China, Iran and North Korea were not signatories to the INF, the United States was putting itself at a disadvantage by not developing medium-range missiles, citing three failed diplomatic attempts to enlarge the treaty.

However, experts believe the United States would be better off modernizing its long-range missile deterrent and ensuring that it could penetrate sophisticated Russian air defenses, rather than developing a new class of medium-range rockets.

The INF treaty, negotiated by then-President Ronald Reagan and Soviet leader Mikhail Gorbachev and ratified by the US Senate, eliminated the medium-range missile arsenals of the world's two biggest nuclear powers and reduced their ability to launch a nuclear strike at short notice.

US cruise and Pershing missiles deployed in Britain and West Germany were removed as a result of the treaty, while the Soviet Union pulled back its SS-20s out of European range.

The treaty requires the United States and Russia "not to possess, produce, or flight-test" a ground-launched cruise missile with a range capability of 500 km to 5,500 km (310-3,420 miles), "or to possess or produce launchers of such missiles."