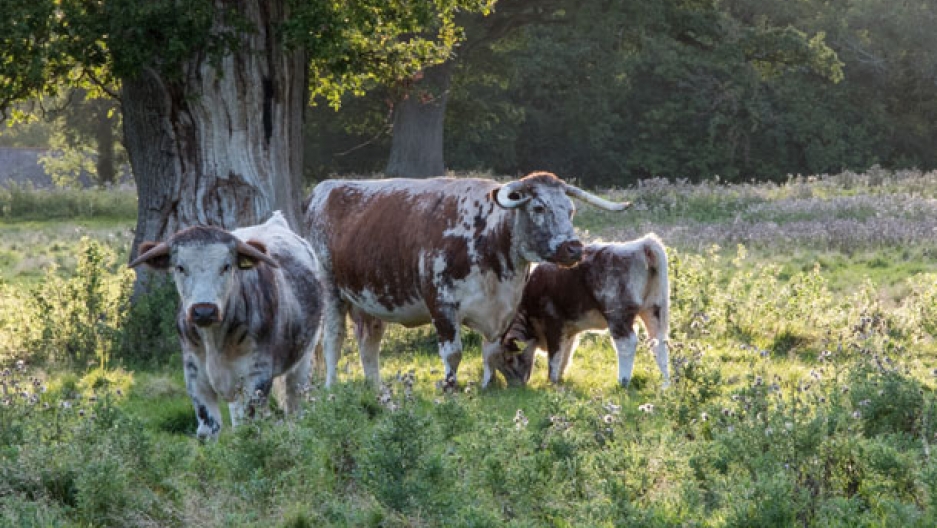 On Knepp Estate in England, Longhorn cattle were chosen for the rewilding project to stand in for their extinct ancestor, the auroch.

When writer Isabella Tree, and her husband, Charlie Burrell, inherited an estate in West Sussex, England, they assumed they would continue to farm, as generations of family had before them. But the intensive agriculture of their predecessors grew increasingly difficult and they decided that farming was no longer a viable option. So they began to mull over another idea: Give the land back to nature and let it take its course.

Isabella Tree’s recent book, "Wilding," is the story of how the land transformed after she and Burrell made this bold and heart-wrenching decision.

“It is a very, very difficult thing to do,” Tree says. “Going from intensive management, where you're really manipulating everything and tidying up and managing the land to the nth degree, to just sitting back and letting go is a massive mind swing.”

Related: A bold plan to slow the melt of Arctic permafrost could help reverse global warming

Tree and Burrel inherited the land in the 1980s from Burrell’s grandparents. It had been intensively farmed since World War II.

“We simply assumed that's what we would continue to do for the rest of our lives — carry on the family tradition and farm,” Tree says. “But when we took over the farm, it was already losing money hand over fist. So, we kept buying bigger machines, throwing more pesticides, more fertilizer, more nitrates. We built bigger dairies and changed our types of cows to higher milk-yielding cows.”

Eventually, it all became too overwhelming and the couple sold all their farm equipment and leased the land to a contract farmer. “It was a very, very black day,” Tree says.

“We are part of a long tradition of the family owning this land. Charlie's ancestors have been here since the Nash castle was built 220 or so years ago. For us, it really isn’t an option to sell. We feel we're stewards of this land and we can't just sell up and move out. So — to look forward to the future — we really had to think of something else — do something with the land rather than against it.”

Related: 'Rewilding' activists aim to bring back some long-extinct beasts to Europe

Contract farming also proved unprofitable, in part because the land sits on heavy clay, which makes farming difficult. The Old Sussex dialect has more than 30 different words for mud, Tree points out. “Even our contract farmer was very willing to give up when we found an alternative,” Tree says.

One of the first steps was to introduce herbivores to the land that could survive outside all year round without supplementary feeding and fend for themselves even in a harsh or wet winter, Tree explains.

They chose old breeds: Old English Longhorn; Exmoor ponies, one of the UK’s oldest breeds of horse; Tamworth pigs, another old breed closely related to Iberian swine; and they added fallow deer and red deer to the small number of roe deer already on the land. 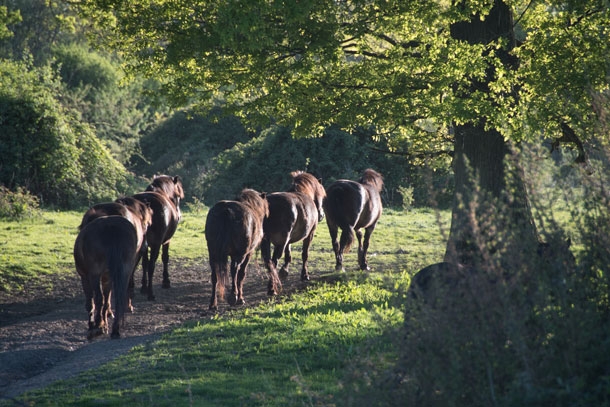 A string of Exmoor ponies.

“We’re not trying to recreate the past in any way,” Tree says. “We’re just trying to use a bit of inspiration from the past and recognize that herbivores in a landscape can trigger extraordinary natural processes — the way they trample and root, the way they rip branches. The red deer will debark trees. So, you’re really letting them manage the landscape for you.”

And that landscape has since changed dramatically. On a hot, sunny day, Tree says, the first thing you notice on a walk around Knepp Estate is the sound of insects — crickets, grasshoppers, bees, hover flies and many more.

“It's thick with insects,” Tree says. “If you go out there on a bicycle, you have to wear sunglasses because you're getting insects in your eyes.”

There is also a “surround-sound” of birdsong. Among the thickets of thorny scrub, there is a patchwork of water meadows running into open grazed areas, along with mature oak trees — all of it a haven for insects and birds. 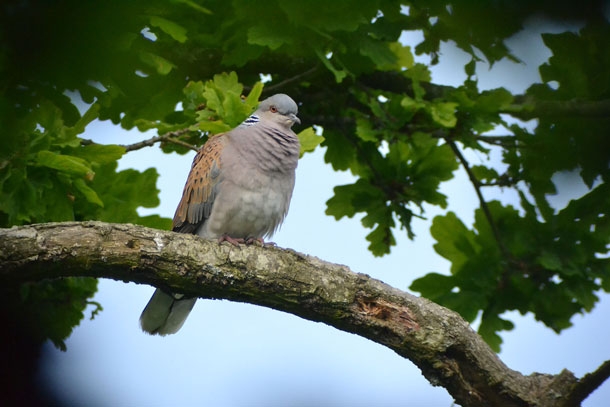 Turtledoves have returned to Knepp Estate, along with other iconic birds like the Nightingale and the Cuckoo bird.

Remarkably, Tree and Burrell didn’t re-introduce any of these creatures to the land, apart from the free-roaming animals. “They've all found us on their own,” Tree says.

Knepp now has 13 of the 18 breeding species of bat in the UK. One of them, the Bechstein's bat, is extremely rare. Peregrine Falcons, which typically nest on cliffs and in church steeples, now nest in one of their trees. Nightingales, a species usually associated with woodland, have taken up residence in Knepp’s exploding hedgerows and thorny scrub.

“They're choosing a very different habitat because it's suddenly available to them,” Tree explains.

Because of Knepp’s size and proximity to a densely populated area of southeast England, they can’t introduce predators to the environment. So, by necessity, they must cull the herds of herbivores — the only real intervention they practice. This has produced an additional benefit: 70 tons a year of “wonderful, sustainable, ethical, pasture-fed organic Longhorn beef and venison and pork,” Tree says. “Because there are so few inputs — no agricultural buildings or supplementary feeding — we’re actually making profits! Whereas before, when we were farming, we rarely made a profit.”

Their neighbors among the adjoining farms initially reacted skeptically to the new venture next door. Like Tree and Burrell, the cultural ethos instilled in them was that every inch of land should be producing food. Over the last few years, however, this has begun to change.

“Post-Brexit, people are really worried about the future,” Tree says. “They've also seen how extraordinary the successes have been at Knepp. I think those successes, compounded by the fact that we're looking at the loss of EU subsidies, are making people rethink. We have a lot of landowners, farmers, policymakers and conservationists now pouring into Knepp to look at what we're doing, and to see if they can replicate something on their land.”

Tree also points out that the UK is facing another kind of farming crisis: “We have 100 harvests left before we have no topsoil in which to grow anything,” she explains. “It really is a terrifying thought. But rewilding, as we've seen from Knepp, can restore soil.”

But can rewilding be profitable for everyone? It’s hard to know. Tree and Burrell have been creative. Aside from the income stream generated by selling meat, they now rent out defunct agricultural buildings and have built a thriving “eco-tourism” business, which includes camping and luxury "glamping" which brings in around $385,000 a year.

The wonderful thing about rewilding, Tree says, is that you never know how it might turn out.

Related: How a family is transforming its cranberry bog from environmental liability to climate change buffer

“We would love to see beaver back at Knepp,” she says. “They would be a fantastic contributor to hydrological engineering that would produce wonderful results for biodiversity. Maybe one day … we’ll see the English government accepting that bison could be back. Perhaps we'll even see wild boar breaking through our perimeter fence. By law, we can't release them, but we know they're in the vicinity. So, if they arrive here, they’ll be allowed to stay. It's just a question of hoping that our delightful Tamworth pigs will entice them in.”