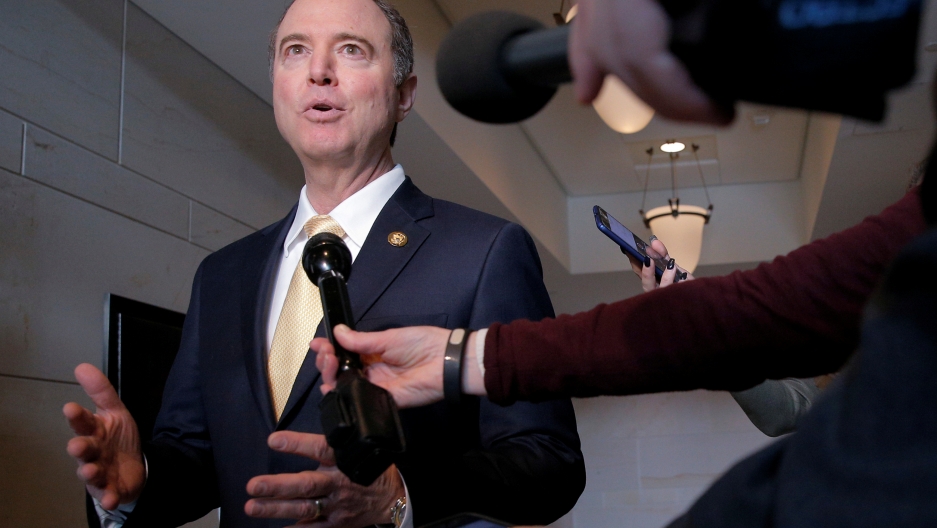 US Rep. Adam Schiff (D-CA) speaks to reporters before a meeting of the House intelligence committee at the US Capitol in Washington, DC, March 8, 2018.

It’s been a big week in the investigation of whether Russia and President Donald Trump's campaign colluded in the 2016 presidential election. Rep. Adam Schiff (D-CA) told The World on Friday that special counsel Robert Mueller might be ready to deliver his report on it before the end of the year.

And this week, Mueller brought Paul Manafort back to court, accusing the former chair of the Trump campaign of lying to the special counsel, despite a plea deal. President Trump has touted the idea of pardoning Manafort.

Cohen admitted Trump had pursued business ties with Russia deep into the election campaign of 2016 — a fact Trump vehemently denied at the time.

The World's Marco Werman spoke with the ranking Democrat on the House intelligence committee, Adam Schiff.

Marco Werman: So, let's start with this week's big news. What's your reaction to the plea deal by Donald Trump's former attorney, Michael Cohen? Cohen admitted this week that he misled the House intelligence committee about Trump's business ties to Russia during the 2016 election campaign.

Adam Schiff: Well, I have to say, it's not a complete surprise. There have been a number of witnesses that we've had profound concerns over whether they've been truthful with us. But it is astonishing that the substance — at least this part of his testimony — involves this deal that the president was denying that he was pursuing at that point where Russians were hacking our institutions, where the Russians were making overtures to the Trump campaign at Trump Tower, that this secret negotiation was going on, is quite breathtaking.

The president tweeted overnight that there was nothing wrong with running a business while running for president and that he made no secret about it. Is his defense essentially, "So what?"

Well, of course, he did make a secret about it. He did hide it from the American people. He flatly said that he was doing no business with Russia, had no interest in dealings with Russia. All of that was untrue, and he knew it was untrue. And so, what he is saying now is also untrue because he didn't tell the country about it. It is astonishing to me that a candidate for president would be — while a hostile foreign power is providing assistance to his campaign by attacking his opponent — would conceal from the American people that he was seeking a lucrative business deal. That his team was offering a penthouse in that new tower to Vladimir Putin. That his team was reaching out to the Kremlin for help with the deal. All this was going on outside of the public view. All of this was being concealed from the American people who were going to the polls to figure out who would represent the interests of the country.

A lot of Trump's base will agree. "So what? It's the word of a New York lawyer against the president we voted for."

Well, I mean, there's certainly some people, as the president has bragged, that would stick with him even if he shot someone in the middle of the street. But increasingly, I think Americans are turning away from this president because they recognize his lack of character. They recognize the essential immorality of this president, a certain corruption of character. So, I think this all is taking a toll, and it should.

So, come January, you will be chair of the House intelligence committee. What is going to be your first priority?

Well, I think one of the first hearings that I want to have of our committee takes a look at what is going on globally. And that is, we see a real rise of authoritarianism around the world. We're hyperconscious of what Russia did to interfere in our democracy two years ago. But the fact is that Russia has been interfering in many other parts of the world for a long time. And even separate, apart from the malevolent Russian actions, there is a global trend towards autocracy and in a normal world, the United States would be leading the pushback. It would be the champion of democracy and human rights. That is not happening under this president, and the American people need to be aware of what's going on all over the world. It's a threat to the very idea of a liberal democracy. And this will be one of our focuses on the committee.

How tense will things become in January? I mean, what is your working relationship like with the White House? Because the president mistyped your name in a tweet earlier this month to make it sound like an obscenity.

I don't think there was any mistyping involved in that. I think it was quite deliberate.

I'm trying to be charitable here.

You are being very charitable. Well, look, I think we can expect, sadly, the same treatment that Bob Mueller is getting, which is we can expect relentless attacks. We can expect a lot of rope-a-dope and stalling and at the same time, bemoaning how long the investigation is taking while they're dragging it out. So, this is our expectation. I would love to be pleasantly surprised, but I think we're likely to face nothing but obstruction.

Congressman, let me come to one more hypothetical. Come January, Trump himself said this week that a pardon for Paul Manafort is not off the table. That was made clear after it became known that Manafort, Trump's former campaign chair, had lied to special counsel Robert Mueller despite his plea deal. What is your take on that, and how would you respond to a pardon?

Well, I would say that obstruction of justice is not off the table. That would unquestionably be part of the body of evidence that the president is obstructing justice. The dangling of the pardon alone may be an act of obstruction of justice and combined with other acts the president has taken: the firing of [James] Comey, the attacks on Bob Mueller, the choice of Matt Whitaker. It paints a pretty vivid portrait of obstruction of justice. But there will be few acts quite as dramatic — say, to the firing of Comey as the pardon of a witness potentially against him. So, this will undoubtedly be part of Bob Mueller's report to Congress. It will be part of the body of evidence that continues to accumulate that he is threatening the impartial administration of justice.

Has he given you a date or a range of dates for that report?

No, he hasn't. And I don't expect that he will. I think he has properly kept his cards very close to the vest. I wouldn't be surprised if he attempted to conclude a report by the end of the year. But a lot of that timing may depend on whether he determines that it's necessary to subpoena the president, to compel him to answer questions about that issue of obstruction of justice because intent is such a key component of an obstruction of justice case. I think he needs to subpoena the president but he may decide conservatively not to, or he may decide strategically that it would take too long to litigate it in court and that time is operating against them, not with him. But that may impact more than any other single factor the timing of that report.