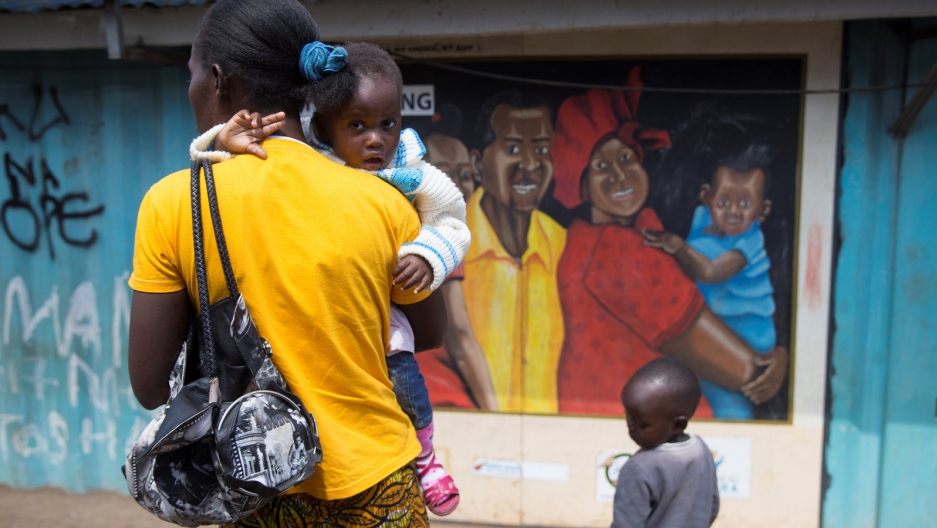 A woman walks past a mural outside the Family Health Options clinic in Kibera, Nairobi, Kenya, May 16, 2017.

A human rights group on Friday challenged the Kenyan government in court over banning international nongovernmental organization Marie Stopes from providing abortion services, saying the move would drive thousands of women and girls to backstreet clinics.

Kenyan authorities directed Marie Stopes to suspend offering abortions and post-abortion care on Nov. 14, after complaints its media campaign was promoting the termination of unwanted pregnancies — a charge the NGO denies.

Abortions are not permitted in Kenya unless a woman's life or health is in danger and emergency treatment is required.

The Center for Reproductive Rights said it had filed a petition calling on the high court to declare the ban by the Kenya Medical Practitioners and Dentists Board unconstitutional and have it lifted immediately.

"Marie Stopes is providing emergency abortions and post-abortive care — and this is provided for under the constitution," Evelyne Opondo, CRR's Africa director, told the Thomson Reuters Foundation.

"The constitution also states that emergency care is a right of every citizen and so Marie Stopes — like any other health facility — has an obligation to provide such care."

Opondo said the ban would have a huge impact on the women and girls from poor informal settlements who make up the majority of the charity's patients. It would drive many to backstreet clinics, putting their lives at risk, she added.

Marie Stopes — which has worked in Kenya for more than three decades and has 22 clinics across the East African nation — said it was not part of the petition.

The NGO said its media campaign was aimed at creating public awareness of Kenya's high rates of unsafe abortion, rather than encouraging people to terminate their pregnancies.

"Wherever we work, Marie Stopes International respects and complies with national laws and regulations governing abortion," a spokesman for Marie Stopes Kenya said.

"In Kenya, abortion is legally permitted when a woman's health or life is at risk, yet a lack of awareness about the law means on average seven women die every day as the result of an unsafe abortion."

Almost half a million abortions were conducted in Kenya in 2012 — mostly in backstreet clinics — with one in four women and girls suffering complications such as high fever, sepsis, shock and organ failure, said a February health ministry report.

An estimated 266 women die per 100,000 unsafe abortions in Kenya — higher than rates estimated in other East African nations, it added.

This is not the first time Marie Stopes — which works in 37 countries in Africa, Asia, Europe, South America as well as the United States — has faced a suspension or closure over its abortion services.

Earlier this week, Niger's health ministry ordered two clinics run by the NGO to close because it had performed abortions, which is banned under Nigerien law except in cases when the pregnancy endangers the mother's life.

A British watchdog in 2016 suspended the NGO from performing abortions on under-18s and vulnerable women, and suspended abortions under general anesthetic after raising concerns over patient care.

Pro-life campaigners lobbying for Marie Stopes clinics to be shut down across Africa criticized the bid to have the ban lifted.

"Abortion is illegal in Kenya, these guys are fighting a losing battle and they should spare us the attention-seeking stunts," said Ann Kioko, Africa campaigns manager for CitizenGO.

"Our efforts to save babies from the abortion mill are not stopping any time soon. It has been a booming baby killing business for Marie Stopes, but their days are numbered."

Next: Italian cities 'turn back the clock' on women’s reproductive rights