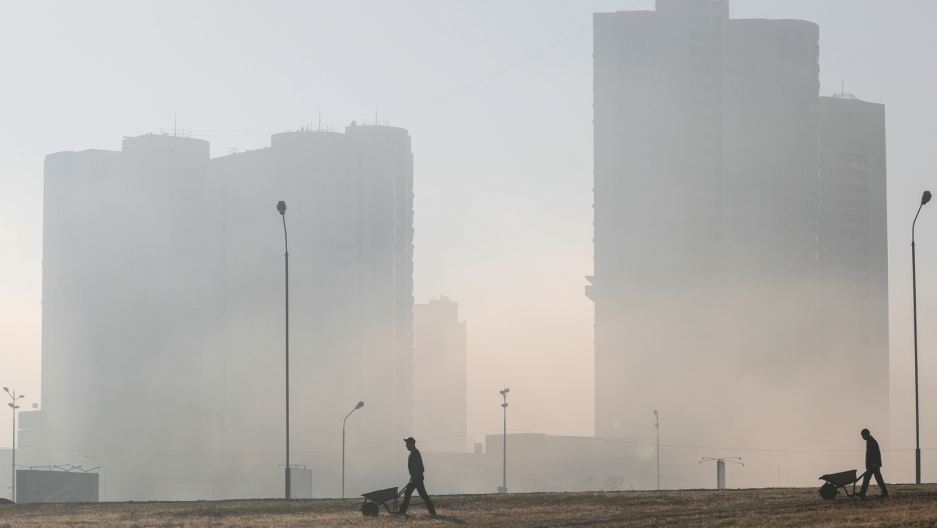 Municipal workers push wheelbarrows at a road construction site on a foggy autumn morning in Kiev, Ukraine, Nov. 9, 2018. Low wages and a lack of opportunities have driven millions of Ukrainians to look for work abroad.

Irina Kovalchuk, 54, wakes up every day to views of the famous Lake Garda in northern Italy. She works as a clerk at a 4-star hotel that dates back to 1875, and Kovalchuk has enjoyed the stunning landscapes and popular tourist district where she works.

As one of the millions of Ukrainians who have left their home country in recent years, Kovalchuk, who was born in a small western Ukrainian city in the Ternopil region, now lives in Salo, Italy. More than 234,000 officially registered Ukrainian migrants have lived and worked in Italy since 2017, making them the fourth-largest migrant group in Italy.

“I went to Italy due to lack of money and opportunities at the beginning of 2000. It was definitely scary to start from scratch in a foreign country, but I had a small daughter, aged 10, and needed a means for living,” Kovalchuk explains. She says she couldn’t find a proper job in her hometown or in the capital, where her brother lived, so — despite her fears — she moved to Italy seeking better working conditions.

Ukrainian officials say approximately 6 million people have migrated in recent years; they now want to establish a Ministry of Migration to manage the exodus.

In 2000, the average salary in Ukraine was $45 per month, according to the State Statistics Service of Ukraine. Kovalchuk found a job in Italy that paid almost 10 times her Ukrainian salary, stabilizing her income and her life. Turbulent times in Ukraine, from independence from the Soviet Union in 1991 to the 2004 and 2014 civil revolutions to the financial crises of 1998 and 2008, left many Ukrainians financially vulnerable, triggering migration waves.

According to a recent Rating Group poll, 35 percent of Ukrainians indicate a desire to move abroad, while 44 percent say they want to move abroad specifically to find work.

Ukraine’s first wave of migration started in the late '80s and peaked by the end of the '90s, according to Oleksey Poznyak, head of the department of migration studies at Ptukha Institute of Demography and Social Studies with the National Academy of Sciences of Ukraine.

Many chose to move to neighboring Poland or Germany while others headed to Russia. Some chose southern European countries or Israel as gateways to nations like the US and Canada.

“People were going due not only to low salaries, but also a big gap in salaries between Ukraine and other countries. The factors are multiple: general disappointment, search for personal development, yet economic factors are the predominant reason for migration to continue until now,” says Poznyak.

The largest periods of migration took place in the early '90s. Thomas Lothar Weiss, head of the International Organization for Migration mission to Ukraine, describes it as “chain migration.” “If some people see their neighbors or friends going abroad and [building] their lives, successfully sending money back, constructing houses, et cetera, they have a dynamic view of the situation,” says Weiss.

The majority of Ukrainians who migrate are unskilled laborers who make up 60 percent — or around 5 to 6 million people — of those who officially and unofficially work abroad. Others are skilled workers seeking personal and professional growth. These numbers continue to fluctuate due to recent military conflicts between Ukraine and Russia.

‘Voting with their feet’

Ukrainian Violeta Moskalu traveled to France in 2000 and received a doctorate from Lorraine University. She went on to become a notable political and governmental consultant in the EU at age 38. In 2015, Moskalu established Global Ukrainians, a nongovernmental organization that connects Ukrainian professionals and expatriates around the world. She believes Ukrainians leave their home country because of disappointment with systematic changes resulting from social revolutions in 2004 and 2014.

“[H]ighly educated people started to migrate due to a lack of social boosts and difficulty with personal realization. We have millions of Ukrainians that move every single year … almost two Ukrainians every minute. … Basically, people are voting with [their] feet,” says Moskalu.

In 2014, Moskalu returned to Ukraine to support post-revolution political leaders and reform initiatives. She still sees Ukraine’s situation as precarious. “It’s the proactive part of the population that moves abroad. It weakens the country and its entrepreneurial spirit, since ...  those who move … are the brave ones who are not afraid to take risks,” she says.

Several EU countries have legalized the status of unauthorized workers over the last 10 years. To fill a shortage of skilled workers, Poland, for example, has made their legalization more attractive to Ukrainian migrants by providing the opportunity to work for six months without official work documents or permits.

Kovalchuk received official status in Italy in 2005. “It was hard at first without documents, but I was lucky to meet good people with whom I worked. In time I got used to the new country, received documents and full protection, the same as average Italians have,” says Kovalchuk. She waited five years before returning to Ukraine to see her daughter and they now both live in Italy together.

In the summer of 2017, Ukraine announced a visa-free scheme aimed at providing safer and more legal options for travel abroad.

“It didn’t have a big effect on the numbers of migrants, yet created a legal and more organized way to work abroad safer,” says Poznyak.

This is especially true for younger Ukrainians under the age of 30 — 55 percent say they are willing to leave Ukraine at any time, according to Ukraine-based Research & Branding Group.

Alena Dobryden, a 19-year-old university student, calls the situation a “brain drain:” “[I]t’s an unfortunate tendency — many students decide to do things in Ukraine [but] sometimes are not able — and go where [it’s possible] to apply their ideas.”

Dobryden volunteers with an international NGO that works with young Ukrainians to encourage them to vote and hold on to their language while abroad. Dobryden herself aspires to study in France.

“I really enjoy French and would like to improve my skills. … Though, I am definitely planning to come back, since I like the Ukrainian spirit now with lots of changes and possibilities ... studying would be a breath of [fresh air] to do some changes back home,” says Dobryden.

“If you go abroad and you see other countries’ development and infrastructure and you bring it back home — this understanding of social protection and level of organization — it’s the kind of understanding that allows you to act more strategic and to change forms of action,” says Moskalu.

Related: For Ukrainians displaced by conflict, there’s no going back

Andrey Lazorenko, 26, who created IdeaSoft, a successful IT software company based in Ukraine, feels that Ukrainians have an incredible sense of innovation.

“Ukraine has one of the highest potentials for growth due to qualified human resources and [the country’s] geography. If you choose the right people to work with, you can create a very strong competitive team that would be more motivated and competitive than their colleagues abroad,” says Lazorenko.

Located in Kharkiv with around 100 employees, Lazorenko says, “We are learning to cope and grow even in unstable or dynamic conditions. ... I have received offers to work abroad and merge our company with international counterparts, but I won’t do that ... Now, at least two foreign companies are coming to us to create projects. … Why do we need ... to [leave] our country?”

“For me, Ukraine is the country of possibilities,” says Lozenako.

Sergey Stariy, 51, who comes from a family of scientists and teachers, also chose to stay in Ukraine. He has worked at the Institute of SemiConductors with his wife, but is currently teaching physics and astronomy to children in Kiev.

“There is a possibility for work here. We have applied for grants and received support, we are winning scientific contests, we are in constant exchange among Kiev teachers, yet I understand the social tendencies and how they are affecting youngsters and their decisions. [Ukraine] should understand how to reintegrate and attract the best brains to come back.”

Around 60 percent of labor migrants say they want to return to Ukraine, but among youth under 30, this percentage is cut in half, according to IOM data.

“Ukraine is not a very simple country. There are tons of possibilities — much faster than abroad — yet there is a mess, a swamp,” says Dmitriy Bondar, founder of MBA Strategy, a leading Ukrainian educational consulting company.

With four offices in different countries and around 100 employees, Bondar has still chosen to receive a permit to live in the US with his family.

“I moved since I wanted a larger scale for my business potential — I have grown out of the Ukrainian market ... I was feeling quite good in Ukraine, but I was surrounded by a lack of law and protection ... You need to look at the context,” Bondar explains.

Ukrainian emigration translates to losses of more than $1.4 billion each year. However, migrants send more than $9 billion home per year, exceeding all other investments, according to the National Bank of Ukraine.

Aleksey Golovchenko, who has worked as a driver and construction worker in Russia, says, “In 2008, some of my friends were already working in Russia, and I have seen that salaries were five times higher than in Ukraine.”

Golovchenko didn’t have safety issues as an undocumented worker in Russia, but he had to return to Ukraine every three months. “With my woodworking skills, I couldn’t find a proper job in my region, so I decided to try. And it’s not even the war, people are going to work in Russia even during the [current] crisis,” Golovchenko explains.

Ukrainian authorities understand the potential consequences of mass migration. To counter shortages of qualified workers, the Ukrainian parliament issued the Law on External Labor Migration in 2015. Two years later, the Ministry of Social Policy wrote a plan of action regarding the reintegration of labor migrants into Ukrainian society.

The Ministry of Social Policy also recently adopted various initiatives with the IOM as a way to encourage migrants to invest in the Ukrainian economy. Around 400,000 Ukrainians save and keep over $4 billion per year. Around 21 percent of migrant workers intend to invest in Ukraine, according to the Research and Policy Dialogue Initiative on Migration and Remittances in Ukraine.

“We are looking into ways to attract migrants to go beyond private consumption and feel protected, to be a part of the development processes back home,” says Weiss. “There is a growing understanding by the Ukrainian government in the potential … of these millions of Ukrainians who are living abroad ... There is a communication, but not enough."

“History is being [made] here. We are trying to change our country mentally, and there are a lot of people with global thinking who have experience of living or studying abroad who can consolidate a plan of action and reboot the system. [This is] a breaking moment and there is hope — to support the country of great possibility.”