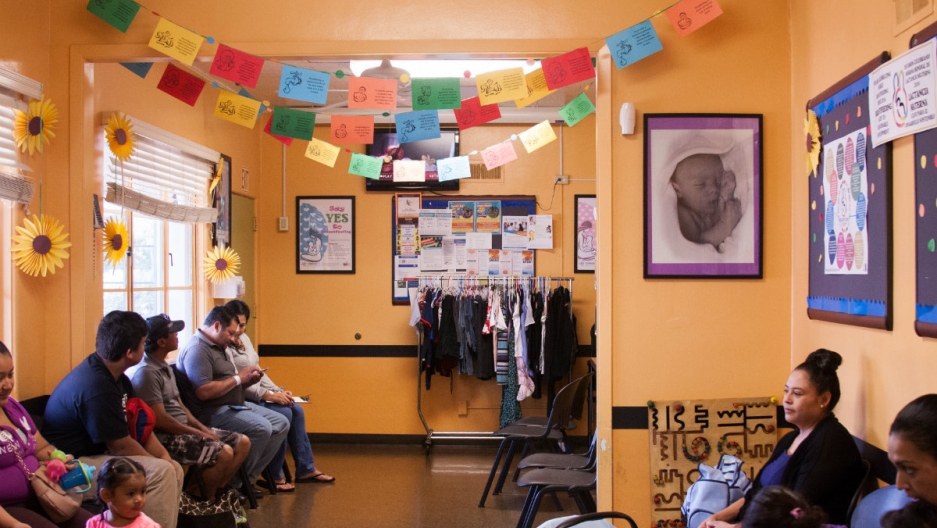 Families wait at a WIC clinic in Central California. The California WIC Association has heard reports from some agencies that mothers (not those pictured) have asked to disenroll from the nutrition program.

Hundreds of thousands of immigrant parents in California may disenroll their children from health insurance, food stamps and other federally subsidized programs because they fear that receiving these benefits will make it impossible for them to become permanent residents in the United States.

Their fears have been triggered by new regulations proposed by the Trump administration that expand the number of benefits that immigration officers can take into account in deciding whether to deny an immigrant permanent residence in the United States. Federal law allows immigration officials to deny green cards to immigrants if authorities decide they are likely to become a “public charge” — someone who relies excessively on government benefits to survive.

The draft regulations are currently open for public comments until Dec. 10th.

Administrators at community clinics, school-based health centers and agencies serving children say some parents in California are already choosing not to enroll or withdrawing their children from health and nutrition programs.

A parent asked First 5 Alameda, an agency that supports families with small children, to stop seeking early intervention services from a local school district for their toddler with autism. A teenage mother in the Central Valley asked to withdraw from the Special Supplemental Nutrition Program for Women, Infants and Children (WIC) one month before giving birth. A grandmother in San Francisco asked North East Medical Services, a federally funded community clinic, to purge her grandchildren’s medical records.

The Trump administration says it is simply enacting the will of Congress when it enacted the Immigration and Naturalization Act of 1965, which includes the “public charge” provision.

“This proposed rule will implement a law passed by Congress intended to promote immigrant self-sufficiency and protect finite resources by ensuring that they are not likely to become burdens on American taxpayers,” said Department of Homeland Security secretary Kirstjen Nielsen in announcing the draft regulations last month. 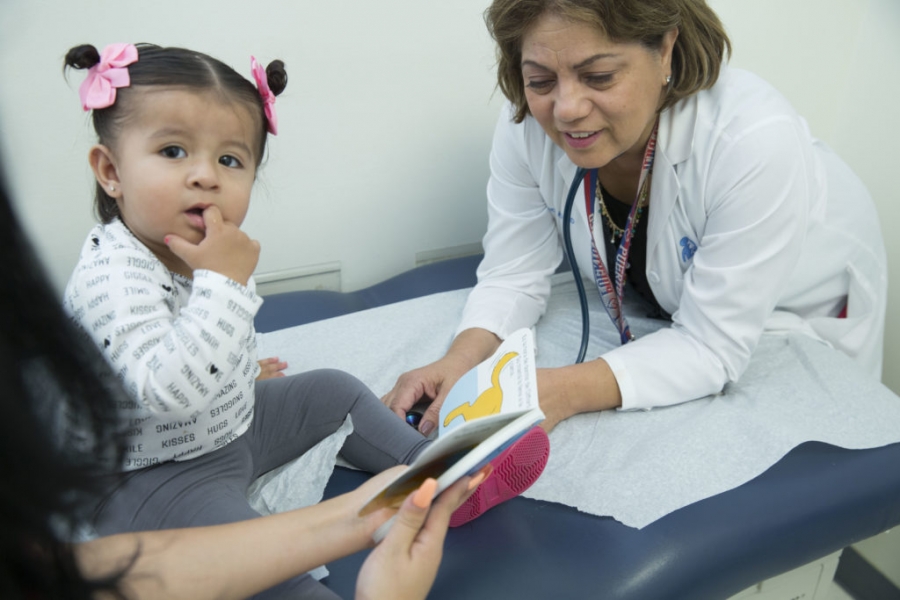 Dr. Yolanda Rebollo reads with a tiny patient at Eisner Health, a community clinic in Los Angeles. Clinic staff are concerned that some patients (not the baby pictured) are not enrolling in food stamps or Medi-Cal.

Under current longstanding policies, receipt of so-called “cash benefits” can be taken into account when immigration authorities decide whether to declare someone a “public charge,” and use that as a basis to approve or deny a green-card application. Cash benefits include Supplemental Security Income (SSI), for low-income elderly and disabled people and Temporary Assistance for Needy Families (TANF), for low-income families with children.

The Trump administration is proposing regulations that would also for the first time include the receipt of some so-called “non-cash benefits” as a basis to deny green cards. Non-cash benefits allow people to get health care, food, medicine and housing without receiving the money directly.

The administration is proposing to target the following benefits in the proposed regulation:

Numerous health and immigrant rights advocates oppose the changes, arguing that if immigrant families disenroll from health insurance, for example, they may forego preventive care, develop more serious health problems and end up in an emergency room, at a greater cost to taxpayers.

The regulations would only apply to applicants for green cards. Undocumented immigrants are already barred from receiving the benefits the Trump administration is targeting.

Under the proposed regulations, benefits used by U.S. citizen children would not be taken into account in deciding whether to grant their parents permanent residence. Even so, the fear generated by the regulations could cause many immigrants to disenroll their children from receiving benefits.

That is what happened in 1996, after Congress placed strict limits on immigrants receiving benefits during the five years after they were granted green cards. The overall use of benefits by immigrants’ family members dropped precipitously,despite still being eligible to receive them. One study found that 25 percent of children with a foreign-born parent disenrolled from Medicaid.

Based on that drop in coverage, the Kaiser Family Foundation, a nonprofit health policy organization, estimated the number of children who might disenroll from Medicaid and the Children’s Health Insurance Program, if between 15 and 35 percent of immigrant parents were to withdraw their children.

In a study released this week, researchers at the Boston Medical Center found a 10 percent drop in immigrant families enrolled in food stamps in the first half of 2018. Researchers speculated that the drop might be attributable at least in part to concerns triggered by the proposed regulations.

Fears about the impact of the new regulations have already prompted Maria, an immigrant from Mexico who requested that her last name not be used, to cancel her 5-year-old daughter’s enrollment in Medi-Cal. She also declined to enroll in the Special Supplemental Nutrition Program for Women, Infants and Children (WIC) for herself and her three-month-old baby. This program provides formula, lactation support and healthy foods for low-income mothers and their babies.

Maria’s baby, a U.S. citizen, began losing weight after she was born in July and her pediatrician recommended that Maria feed her formula in addition to breastfeeding. She also suggested Maria apply to enroll in the WIC program to help her pay for formula and buy groceries.

Maria knew how much the program could help, as she had benefited from it when her 5-year-old daughter was born. But this time, she didn’t apply because she was afraid it could affect her green card application.

Maria is married to a U.S. citizen and she has had a green card since January. Because she received her green card through marriage, it is conditional for two years. Next year, she will have to apply again to make her status permanent, by proving that her marriage is a legitimate one.

Even if the draft regulations proposed by the Trump administration are finalized, some immigration experts say permanent residents applying to remove the conditions on their green cards — like Maria — would not be subject to new scrutiny. Furthermore, even if Maria were subject to the regulations, the Women, Infants and Children program is not included in the benefits that could be counted against her nor are any benefits used by Maria’s children. Still, earlier versions reported in the press stated they might. All the uncertainty has made Maria uneasy. 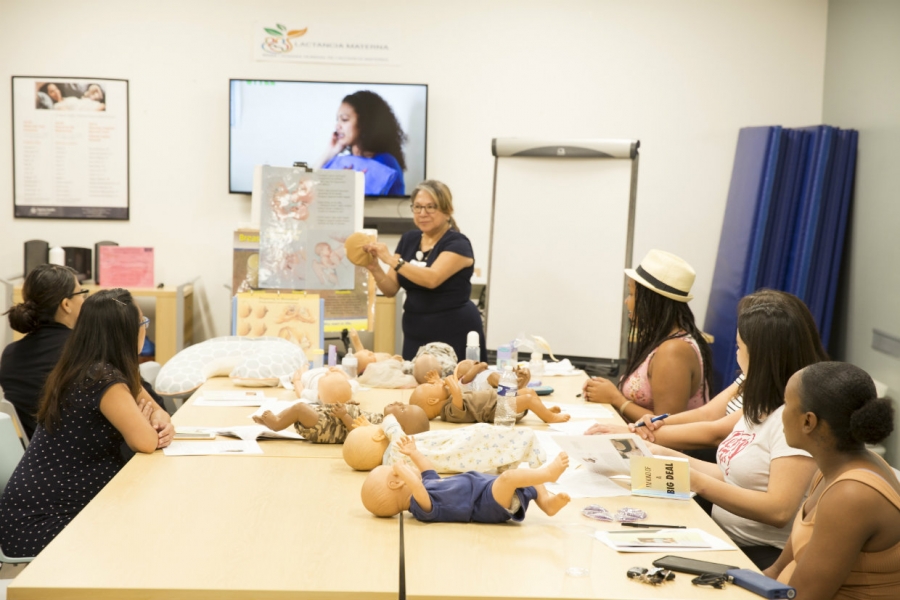 Health educator Magdalena Estrada teaches a prenatal class at Eisner Health in Los Angeles. Clinic staff say many patients (not those pictured) have been hesitant to enroll in food and nutrition programs.

“It’s confusing, and it makes me feel not really comfortable to apply,” Maria said. “How can I be sure it’s not going to be a problem for me?”

Maria’s fears are echoed in the accounts of staff at clinics and other agencies that serve low-income immigrant families.

“It’s kind of the same story over and over. Either they saw on the news that they were going to be penalized for using the program, or their immigration lawyer told them they’d be penalized,” said Sarah Diaz, policy and media coordinator for the California WIC Association, a nonprofit education and advocacy organization. “We’ve heard that people have asked to return their WIC vouchers [for groceries] or their breast pumps and be purged from the computer system entirely.”

Children’s advocates fear that a significant withdrawal from healthcare and nutrition programs would also have an impact on a child’s ability to succeed in school.

Adding to multiple studies that show that medical insurance and access to food improve school performance, researchers at the University of Missouri found in June that children who lost benefits from the Women, Infants and Children program prior to attending kindergarten had lower reading scores compared to their peers.

Administrators of school-based health centers say they will provide services even if students don’t have health insurance. But some health providers worry about what will happen if uninsured students need care for health problems that school clinics can’t address.

“They’re not going to consider going to get glasses if the child needs them. Or if they need a visit with the dentist, they will not go because they don’t have coverage,” said Maria Sanchez, program manager for San Ysidro Health, which has two mobile clinics near the Mexican border.

“When we hear about families being nervous about services, it really concerns us about the future for their kids,” said Page Tomblin, senior policy administrator of First 5 Alameda County, a public agency promoting early childhood education programs.

This story was originally published on EdSource, a non-profit journalism organization focused on education