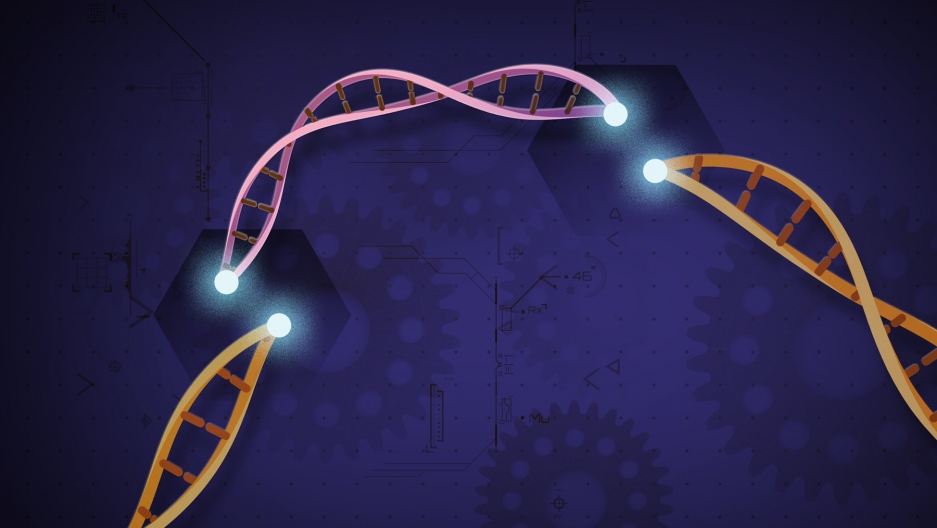 CRISPR-Cas9 is a customizable tool that lets scientists cut and insert small pieces of DNA at precise areas along a DNA strand. This lets scientists study our genes in a specific, targeted way.

Just before hundreds of scientists, ethicists, and policy makers from around the world gathered in Hong Kong to discuss the future of genome editing, a Chinese scientist, He Jiankui, claimed to have created the world’s first genome edited babies — twin girls named Lulu and Nana.

While the details about the exact procedure are still unknown, the girls’ genomes were allegedly altered when they were embryos using in vitro fertilization and CRISPR-Cas9, a revolutionary genome editing tool, to make them immune to contracting HIV.

Related: 4 things you wanted to know about gene editing

If true, He’s claims would be a wild leap for science and medical ethics, but the fact is, this was inevitable and even predictable, despite an apparent disregard for all global scientific and ethical norms.

The timing of the announcement reeks of being a calculated attempt to make headlines ahead of the summit — which China pulled out of at the last minute — and the news created an uproar around the world.

There is seemingly a global consensus that CRISPR is not yet precise enough, nor tested enough, to use on human embryos. I agree with others who have called the moves “reckless” in the face of ethical and regulatory ambiguity about how to handle genetic changes that can be passed onto future generations, even for medical reasons.

In a YouTube video, He said that the twin girls were “healthy like any other babies,” and described his reasoning for choosing to “knock out” the CCR5 gene, which is a naturally occurring mutation known to create HIV immunity in some populations.

He is slated to discuss his work on Wednesday at the Second International Genome Editing Summit currently underway in Hong Kong. 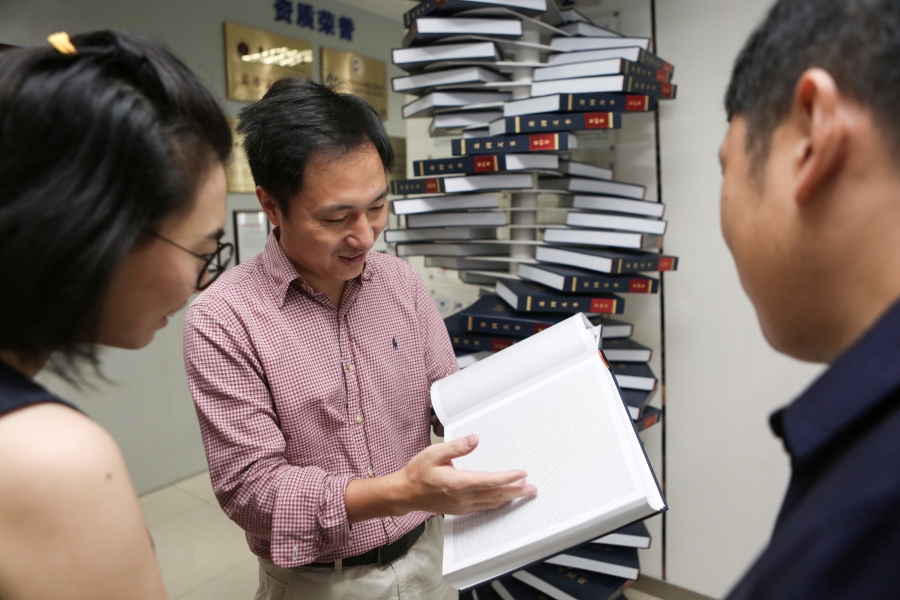 Scientist He Jiankui shows "The Human Genome," a book he edited, at his company Direct Genomics in Shenzhen, Guangdong province, China Aug. 4, 2016.

What does this mean?

At the moment, there are more questions than answers about the CRISPR’d babies.

Did He have ethical approval? The hospital He claims to have worked with has opened an investigation.

Why has He been on leave from his university position for several months? He says he left voluntarily in February to focus on research, but the University has condemned the news and insisted they had no knowledge of the procedure.

Why modify this gene, when there are other ways to prevent HIV? Washing sperm, for one, minimizes the risk of passing on the virus significantly, not to mention that modern antiretrovirals suppress the virus so much, it’s highly unlikely for it to be passed.

Was there truly informed consent? Materials provided by He suggest that he billed the edits as an AIDS vaccine trial, which is misleading. So it is unclear if, or to what extent, the parents understood the procedure and that their girls would be the first edited children — and that if something went wrong, it might be irresponsible for them to reproduce, because edits to the human germline will be heritable.

("Human germline" are the genes that will be passed on to children or future generations.)

George Church, a CRISPR pioneer known for his controversial work on woolly mammoth revival, told the Associated Press that the attempt to engineer immunity to HIV was “justifiable.” He is one of the only defenders of the work.

Eric Topol of the Scripps Institute called the experiment “rogue human experimentation” and told the AP that He’s research was “far too premature.”

The news could potentially force the hands of regulators to choose whether to go ahead with sanctioning germline modification, and how, at this week’s conference in Hong Kong. This seems to be, in part, one reason He decided to publicize his work.

“I feel a strong responsibility that it’s not just to make a first, but also make it an example," He said ahead of the conference. "Society will decide what to do next.” 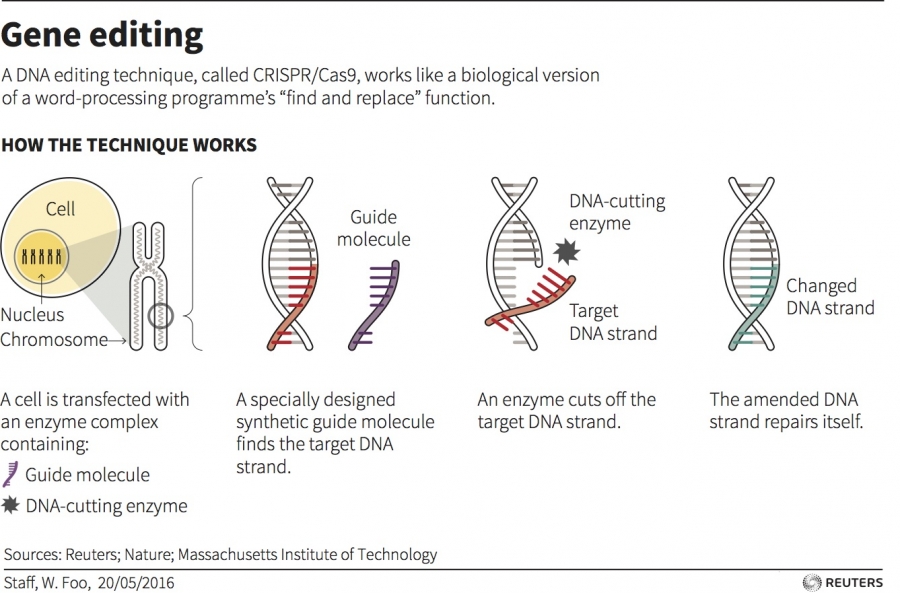 Is there a societal responsibility to engage with genome editing?

Engineering babies, even for therapeutic reasons, creates a morass of regulatory and ethical questions. There is wide agreement that social considerations, such as issues of access and social justice, must be at the fore of any efforts to regulate germline editing.

After the first International Genome Editing Summit in 2015, two reports laid out the scientific, ethical and regulatory challenges of germline editing. The Nuffield Council on Bioethics’ report from the UK’s national bioethics body, insisted that germline editing should not “increase disadvantage, discrimination or division in society.”

Shockingly, according to the MIT Technology Review, He claimed that his ethical basis for performing the edits on the babies was the 2017 NASEM report, written by experts in the US. It does not have the force of law and is not meant to be taken as a regulatory framework. Plus, that report strongly says that “heritable germline editing is not ready to be tried in humans.”

The wails of those who are afraid of the “slippery slope” to the inevitable age of “designer babies” are nothing new. Despite this experiment, which some called “monstrous,” there will be a time that editing embryos will be acceptable. We are nearly there. And we already select babies based on their traits.

Technologies such as pre-implantation diagnosis (PGD), which is legal in the US, allow doctors to select the “healthiest” or “best” embryos for implantation after IVF, and can also be used for sex selection. A report this month announced another test for embryos that would screen for disease risks that could result in lower IQs.

There is already a crisis of medical tourism when it comes to using advanced assisted reproductive technologies. Fertility treatments are a booming business — and not every technique is available, or legal, everywhere.

During a panel at the Hong Kong summit this week, experts were unsure whether surrogacy laws could be used to prosecute French parents who create genetically engineered babies. An Indian representative explained that laws are different between territories there. The UK and Singapore both have licensing structures for clinics and labs that want to research human embryo editing, but implantation of embryos is illegal. The US was not represented, but any research on embryo editing is in violation of laws related to unapproved therapies, and funding for embryo research is banned by Congress.

But if there is one thing that’s clear, it is that parents who are desperate for healthy, genetically related children will pay exorbitant prices to get them, regardless of legality.

When you think about it, it makes sense — a Pew survey found that while many Americans would be in favor of editing embryos for health reasons, 73 percent said they expected genome editing technologies “will become available before they have been fully tested or understood” and “these enhancements could exacerbate the divide between haves and have-nots.”

The trend for fertility tourism shows no signs of abating, and with germline modification suddenly on the menu, more CRISPR babies are sure to be on the horizon.

But this doesn’t need to be the end of the world.

With proper regulation, transparency and oversight, scientists could, over the next few years, research safe and efficacious ways to eliminate many fatal diseases using genome editing.

There must also be an informed public debate about what is allowed and what isn’t. And equitable access to medical use must be at the very top of the list when policymakers consider how to regulate these treatments.

However, at this point, it’s simply no longer appropriate to push this critical medical research overseas or underground.

This is a mistake.

By placing a moratorium on or banning research into safe germline editing, we will all but guarantee that only the wealthiest among us, with the means to travel and pay for the procedure, will be the only ones with “designer babies.”

Alex Pearlman is a bioethicist and journalist in Boston who writes about the intersection of human rights and emerging technologies.