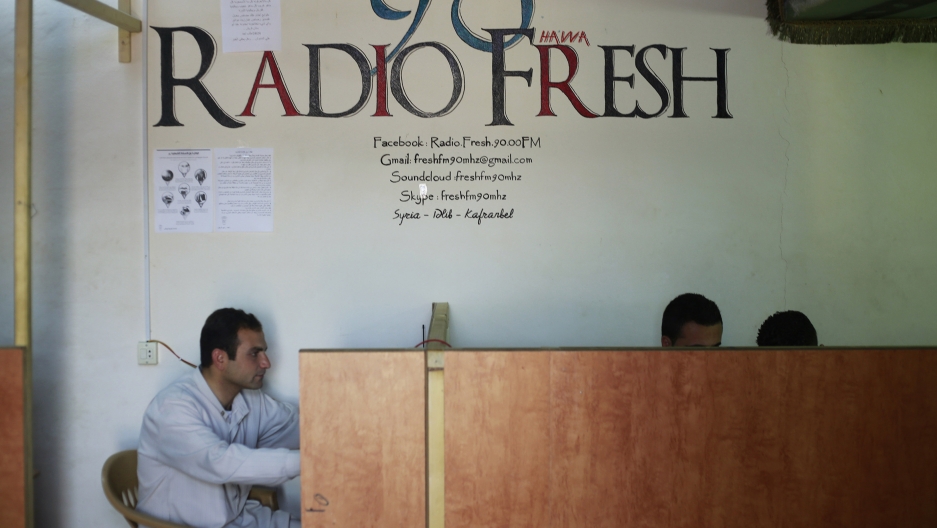 Activists sit at the premises of the Radio Fresh station in Kafranbel town in the Idlib governorate May 18, 2014. In 2013, Raed Fares, a Syrian activist and journalist, launched Radio Fresh. The station broadcast news and warned residents of air raids. It put Fares in the crosshairs of the government and extremist factions among Syria’s opposition.

In the months before his death, Raed Fares rarely went home. He often slept in his office, visiting his family only a few hours each day. He knew there were people who wanted to silence him and he didn’t want to put his family at risk. He avoided routines, coming and going from his office at different hours every day.

"We told him, 'go to Turkey,'" recalls friend and colleague Ahmad al-Hamdo. But he refused. “He would say that what befall us shall also befall him, and that his life is not worth more than ours.”

In 2011, like so many Syrians, Fares took to the streets to protest against the government of President Bashar al-Assad. When those protests turned into war, Fares documented human rights violations by the government and the devastation caused by air strikes and shelling. He filmed the aftermath of strikes and posted videos online for the world to see.

Fares brought the small town of Kafranbel to the world stage. Each week, he posted videos and photos of residents holding banners, often with satirical messages.

Fares’ resistance started against the Assad government, but as militants took over opposition-held parts Syria, he held them accountable as well.

Three years ago, as Syria’s war looked increasingly like a proxy conflict for regional and world powers, residents held a sign in English, all caps.

In 2013, Fares launched Radio Fresh. The station broadcast news and warned residents of air raids. It put Fares in the crosshairs of the government and extremist factions among Syria’s opposition.

When US funding for Radio Fresh was halted earlier this year as part of cuts to Syria’s opposition, Fares wrote an op-ed in the Washington Post. “Without groups like Radio Fresh to provide alternative messages, another generation will take up arms to found the Islamic State’s second and third editions,” he warned.

For many who knew Raed Fares personally or spoke with him online during the years of revolution and war, his death notice came in a gruesome form. On Friday morning, a photo of Fares — lifeless, blood on his grey shirt — was shared on social media. 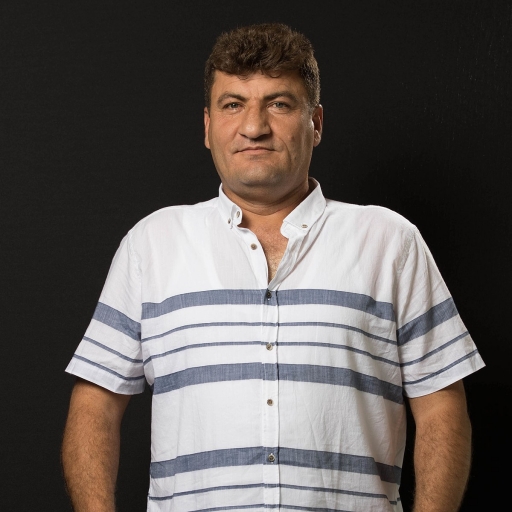 Raed Fares was a Syrian pro-democracy activist, citizen journalist, and civil society organizer, who was well known for his news reports from his home in Kafrenbel, Syria.

Fares didn’t die in an air strike or shelling by the Syrian government. He was gunned down in Kafranbel along with his colleague, Hammoud al-Juneid.

It was not the first attempt on Fares’ life. In 2014, he almost died after being shot in the chest by ISIS militants. He was abducted several times by al-Qaeda-linked groups and tortured.

“Targeting Raed Fares is not about taking the life of one man,” said his colleague Hamdo. “It’s about targeting an idea, a mentality, an entire revolution. When people heard about his assassination, they [asked], 'Where does the revolution go to from here?'”

It’s not clear who sent the gunmen who killed Fares and Juneid. No group has claimed responsibility. But their friends and colleagues say they believe it was it was jihadist militants who also oppose the Assad government, but didn’t like Fares’ message of democracy and freedom for all Syrians.

“We want justice. We reject all those military factions and want a free Syria for all Syrians,” Hamdo said. “These are some of the principles that Raed had taught to us, and they can’t take his principles away even though they managed to take his life.”

Mourners carried the bodies of Fares and Juneid through the streets on Friday, draped in the flag of the Syrian revolution — a revolution, that despite everything, Fares still believed in.

Fares’ death shows the sad reality for the once-hopeful revolutionaries and regular Syrians who simply sought freedom. They are now stuck between the rule of the Syrian government and the many extremist groups on the ground who appear disinterested in democracy and freedom for the Syrian people.

When he spoke in Oslo last year, Fares talked about the double oppression experienced by Syrians.

“The truth is,” he told the audience, “the Syrian people are victims of two kinds of terrorism: the one led by Assad, and the one led by ISIS and extremist groups.”