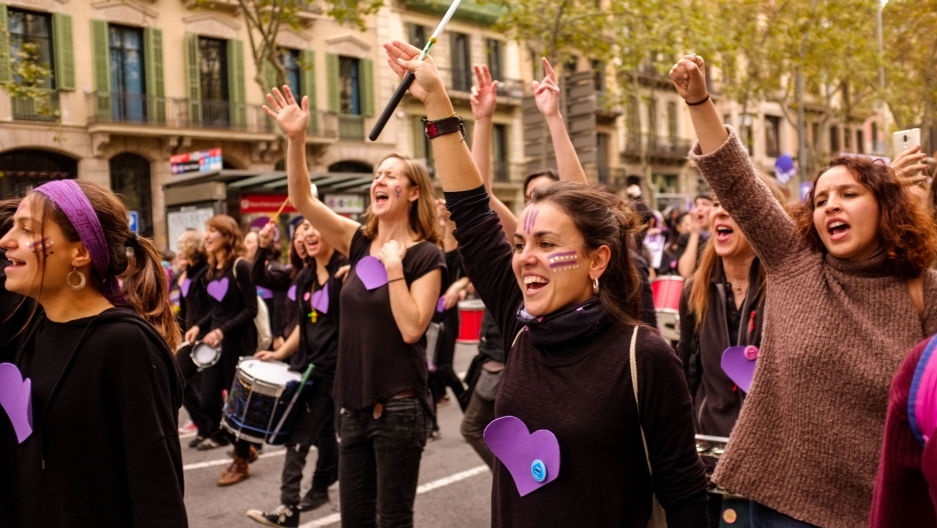 Feminists in Spain rallied against prostitution during the UN’s International Day for the Elimination of Violence against Women on Sunday. This picture was taken at the march in Barcelona on Sunday.

A nationwide protest against gender violence in Spain on Sunday revealed a deep division among feminists over whether sex work constitutes violence against women.

Tens of thousands of people dressed in purple — the color traditionally associated with the women’s liberation movement — marched through the streets of major cities from Barcelona and Madrid to Seville and Toledo to mark the UN’s International Day for the Elimination of Violence Against Women. Similar protests took place around the world, from Japan to Turkey to Rwanda. Along with traditional indictments against femicide and domestic violence, this year’s rallies across Spain were also positioned against prostitution.

Prostitution, long a divisive issue in the country, launched an especially contentious debate after the country’s first sex workers’ union — the Organización de Trabajadoras Sexuales, or OTRAS — was greenlit in August this year. 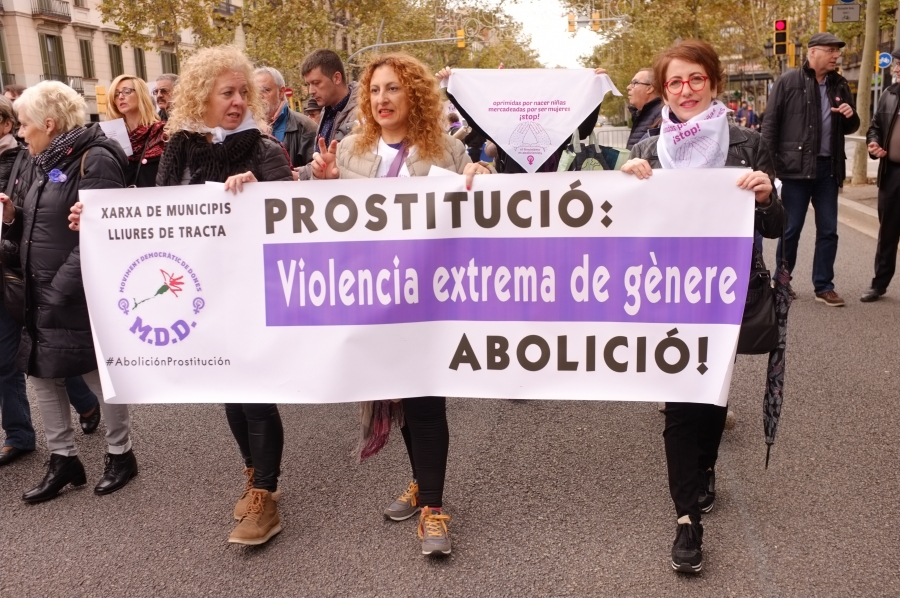 Feminists in Spain are divided over the issue of prostitution — which was front and center during Sunday's rallies.

Prostitution is neither regulated nor criminalized in Spain. It’s in a state of legal limbo that’s allowed a sex market to blossom to the tune of $26.5 billion per year — almost twice more than sex work in the US. A vast portion of the industry works under the guise of legal “gentlemen’s clubs” (“clubes de alterne”) where waitresses and dancers are known to provide “extra” services. So, while businesses line their pockets, the workers themselves can’t claim basic worker rights and run the risk of being heavily fined if they work on their own in public spaces.

OTRAS was established to try to create some kind of safety net for workers, but ever since its inception, it’s faced staunch opposition from Spanish feminists who believe legalizing sex work will allow trafficking to proliferate. Police estimates widely cited by local media claim between 80 and 90 percent of women in prostitution could be trafficked, though this figure is contested.

“Prostitution and sex trafficking are the same,” said Cristina Simó, 51, president of the Women’s Democratic Movement. She marched on Sunday alongside members of her organization carrying a banner that read, “Prostitution: extreme gender violence. Abolition!” For the past three years, Simó has spearheaded various sex-trafficking awareness campaigns in Spain. Her ultimate objective is to get prostitution banned here.

Abolitionists like Simó would like to see Spain adopt the same anti-prostitution law as Sweden, which banned the purchase, but not the sale of sex, in 1999, to essentially kill off demand. In the days leading up to this year’s march, the platform gained enormous popularity on social media under the hashtag #25NEsAbolicionista (“Nov. 25 is Abolitionist”).

The tweet from a leading anti-trafficking organization says: “Prostitution, sexual exploitation and human trafficking is gender violence #MachoViolence,”  “#abolitionists at @APRAMP want a future based on equality #25NIsAbolitionist” and “Not everything has a price, not everything can be bought #againsttrafficking.”

The translation is: “Prostitution is the best school on inequality, a brutal education where men learn to see women as inferiors whose bodies they can use, and women learn to see theirs as a product. That’s why [we say]: abolition or barbary.”

“But you can’t prohibit it from one day to the next,” said Júlia Diumenjó, 21, an activist with Corriente Roja, a Trotskyist organization. Many abolitionists agree that prostitution can only be banned once the women in the trade are offered viable alternatives. “There have to be ways they can find work and get trained,” Diumenjó said.

Spain’s unemployment rate hovers around 15 percent, the second-highest after Greece in Europe. The majority of sex workers in Spain are immigrants. Getting access to papers and aboveboard work is often difficult. 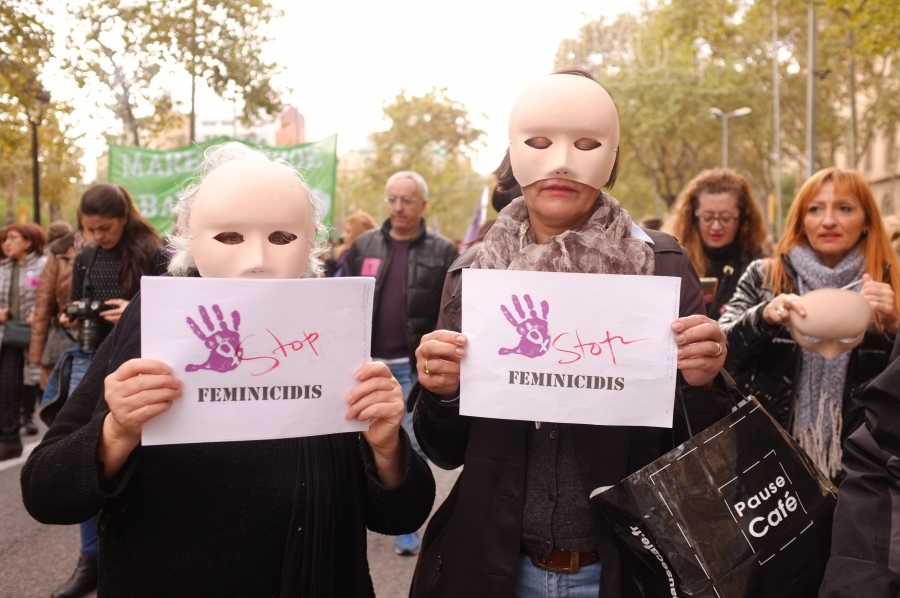 Tens of thousands of people dressed in purple, the color traditionally associated with the women’s liberation movement, marched through the streets of major cities from Barcelona and Madrid to Seville and Toledo to mark the UN’s International Day for the Elimination of Violence Against Women.

The UN’s 1993 Declaration on the Elimination of Violence Against Women includes “forced prostitution” in its definition of violence. OTRAS members are adamant about having chosen their line of work.

Concha Borrell, 52, OTRAS’ secretary-general, said she was irked but unsurprised by what she sees as the abolitionists’ claim to consensus in this year’s march.

“Since we’re whores, since we’re sex workers, the abolitionists don’t consider us women. That’s their kind of feminism,” she said. Borell marched with a group of sex workers and transgender women beneath their trademark red umbrellas.

Related: How #MeToo changed this year's Running of the Bulls

Her union hangs in the balance: Several abolitionist groups brought a case to court arguing that prostitution could not legally be considered work, and as such, prostitutes could not unionize since they couldn’t be deemed as workers. Last week, a high court voided the union’s bylaws on this very basis. OTRAS is still a legal entity but can do little with no bylaws. They’re appealing the case.

“Prostitution [is] a complex debate that will take a long time to be resolved,” said Rosalia Molina, 64, a member of the anarchist union, the General Confederation of Labor. Her union has not adopted a formal position on the issue. She explained that the last massive, feminist march in Spain — March 8’s International Women’s Day — the official position had been to recognize sex workers’ labor rights. “That has nothing to do with either being in favor or against prostitution as a business.”

Gender violence in Spain made headlines in April this year when a controversial gang rape trial known as the “Wolf Pack” case found the alleged rapists guilty of a lesser offense of “abuse.” Outrage over the sentence launched massive protests around Spain in what became known as Spain’s #MeToo movement. In response, the Spanish government vowed to revise the penal code to better prosecute sexual violence, and 600 judges across the country are being trained to interpret the law with a gender perspective.

As for prostitution, the abolitionist government has promised to introduce legislation to combat sexual exploitation. 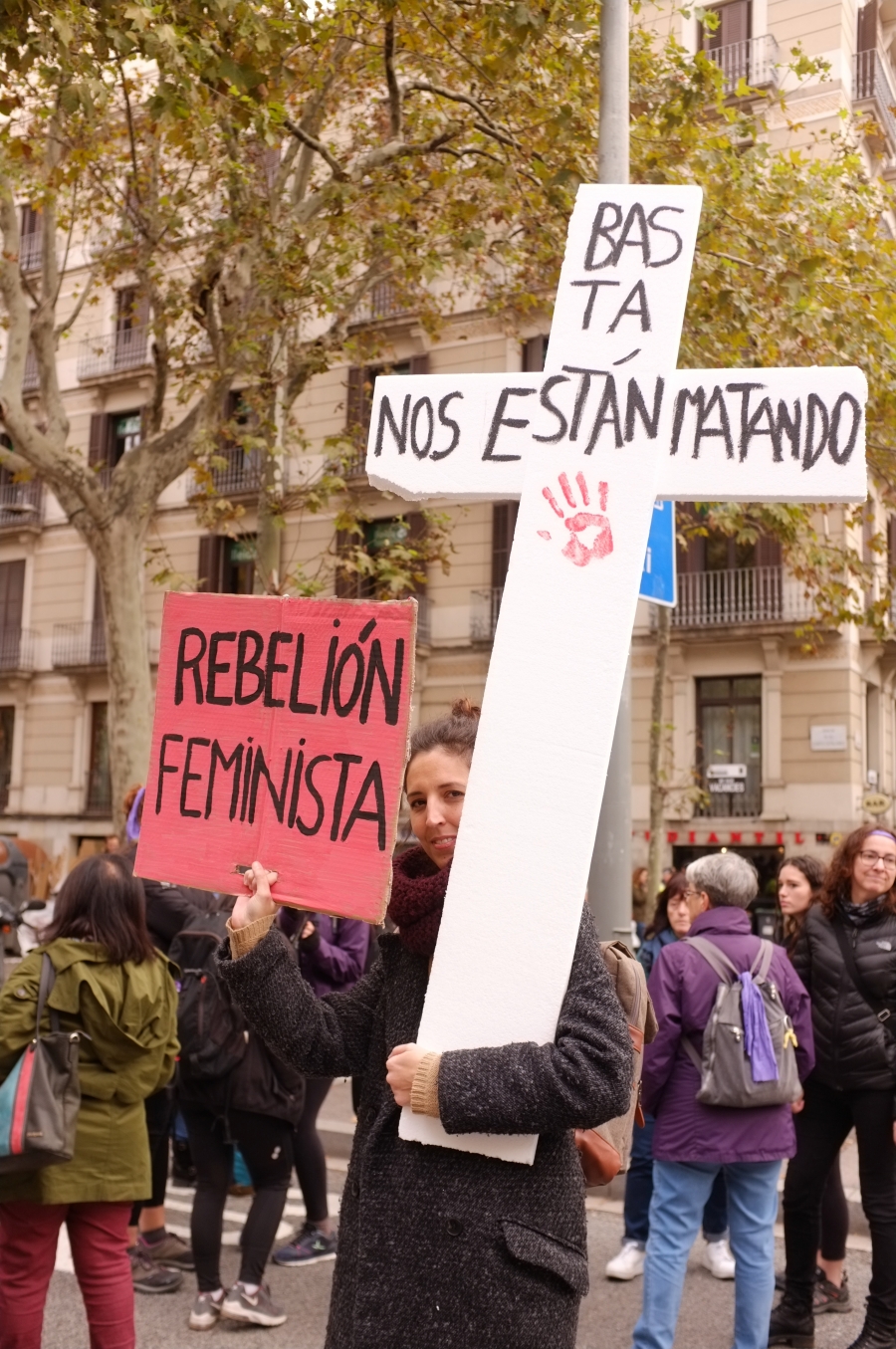 Prostitution, long a divisive issue in the country, launched an especially contentious debate after the country’s first sex workers’ union — the Organización de Trabajadoras Sexuales, or OTRAS — was greenlit in August this year.