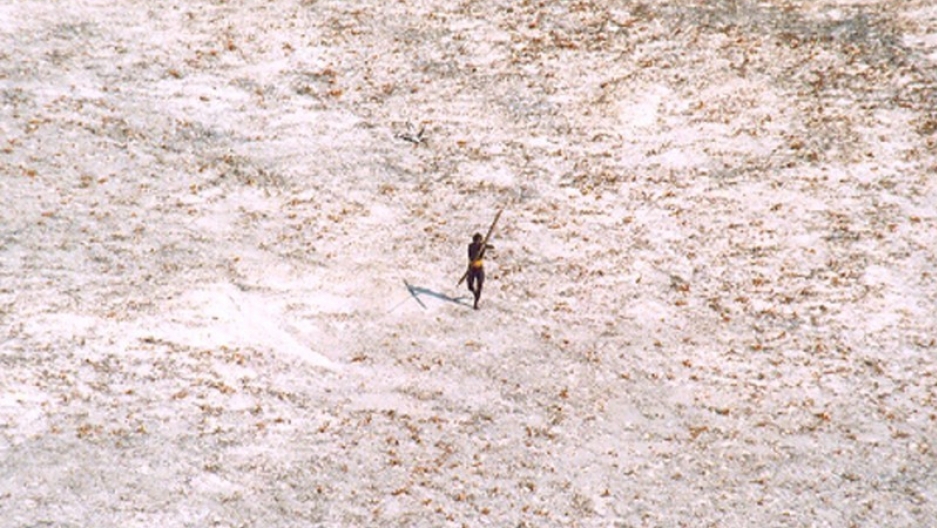 A Sentinelese man aims with his bow and arrow at an Indian coast guard helicopter as it flies over the island for a survey of the damage caused by the tsunami in India's Andaman and Nicobar archipelago, Dec. 28, 2004.

An American self-styled adventurer and Christian missionary has been killed and buried by an Indigenous tribe on a small island in the Bay of Bengal on the Indian Ocean where he had gone to proselytize, local law enforcement officials said on Wednesday.

John Allen Chau, 26, was slain on North Sentinel Island, which is home to what is considered the last pre-Neolithic tribe in the world and typically out of bounds to visitors, said Dependra Pathak, the director general of police in Andaman and Nicobar.

"A murder case has been registered against unknown persons," Pathak said, adding that the local fishermen suspected of illegally ferrying Chau to the 23-square-mile island had been arrested on separate charges.

Chau was killed by members of the Sentinelese community using bows and arrows, according to multiple media accounts.

Chau's social media posts identify him as an adventurer and explorer. Responding to a travel blog query about what was on the top of his adventure list, Chau said: "Going back to the Andaman and Nicobar Islands in India."

Chau also said in the blog: "I definitely get my inspiration for life from Jesus."

Related: Americans in Lebanon say they're on a mission from God to teach Syrian refugee kids

Based on his social media posts, Chau appears to have visited India multiple times in the last few years, exploring and preaching in many parts of southern India.

"We recently learned from an unconfirmed report that John Allen Chau was reported killed in India while reaching out to members of the Sentinelese tribe in the Andaman Islands," members of the Chau family said in a post on his Instagram page.

The family described him as a "beloved son, brother and uncle" as well as a Christian missionary, wilderness emergency medical technician, soccer coach and mountaineer.

"He loved God, life, helping those in need and had nothing but love for the Sentinelese people," the family said. "We forgive those reportedly responsible for his death. We also ask for the release of those friends he had in the Andaman Islands."

The family asked that local contacts not be prosecuted in the case.

Buried in the sand

Police said in a statement that they had launched an investigation into Chau's death after being contacted by the US consulate in the southern Indian city of Chennai.

"We are aware of reports concerning a US citizen in the Andaman and Nicobar Islands," a consulate spokeswoman said in an email but declined to provide further details.

Pathak said a coast guard vessel with police and experts on the tribe had gone to scout the island and formulate a plan to recover Chau's body. North Sentinel Island is about 31 miles west of Port Blair, the capital of the island cluster.

Chau made two or three trips to the island by canoe from Nov. 15, making contact with the tribe but returning to his boat, Pathak said. He told the fishermen on Nov. 16 he would not come back from the island and instructed them to return home and pass on some handwritten notes he had made to a friend.

The next morning they saw his body being dragged across a beach and buried in the sand, the police chief said, adding: "This was a misplaced adventure in a highly protected area."

A source with access to Chau's notes said Chau had taken scissors, safety pins and a football as gifts to the tribe.

In his notes, the source said, Chau wrote that some members of the tribe were good to him while others were very aggressive.

"I have been so nice to them. Why are they so angry and so aggressive?" the source quoted Chau as saying.

The source, who asked not to be named, said Chau wrote that he was "doing this to establish the kingdom of Jesus on the island ... Do not blame the natives if I am killed."

In 2006, two fishermen who strayed onto the island were killed and their bodies never recovered. An Indian coast guard helicopter sent to retrieve the bodies was repelled by a volley of arrows from the community.