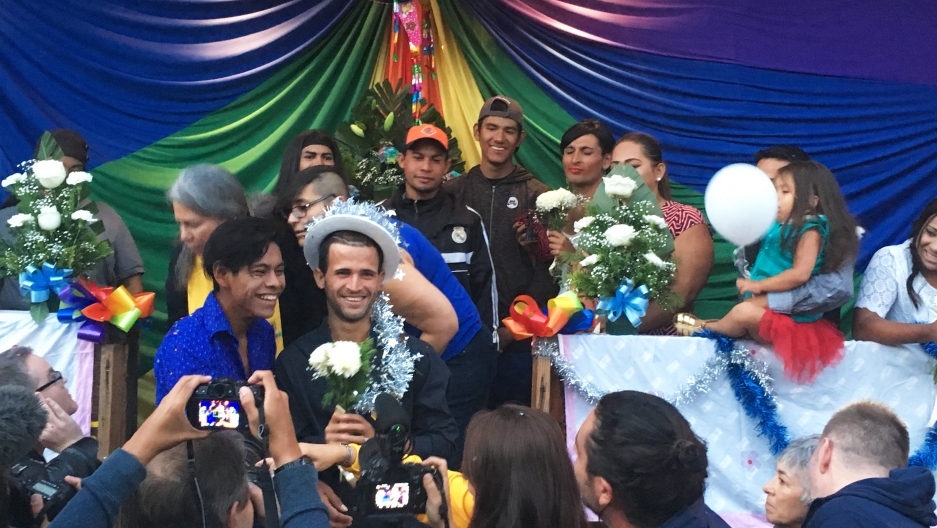 One of seven LGBTQ couples that got married in Tijuana, Mexico.

I met Belle on Saturday, outside of a shelter in Tijuana. She’s 23, with platinum hair and a single dangly earring. Belle says she began identifying as female when she was 14. She’s from Honduras and her decision to start dressing in women’s clothes made her an instant target.

“They hated me for being a trans woman and they insulted me. They told me I had to be a man because I was born that way,” she says.

Related: Same-sex marriage: Is Cuba using it to 'pinkwash' other oppressive policies?

Belle is among a small contingent of the roughly 3,000 migrants on their way to the US-Mexico border who identify as LGBTQ. Many of them fled violence and harassment at home. They found each other during this journey and have stayed together in a tight-knit group. They were among the first to reach Tijuana and most plan to seek asylum in the US. 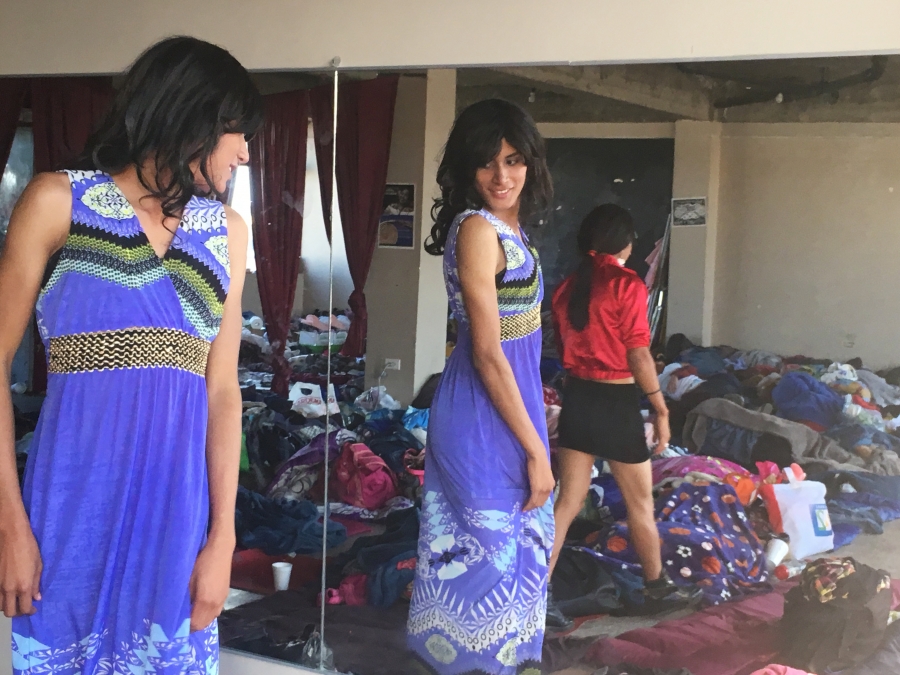 A migrant tries on dresses to prepare for their wedding.

Belle is not her real name. No one in this story wanted to use their real names for fear of jeopardizing their chance of getting asylum in the US.

As we talk, Belle pulls out her phone. I’m not prepared for what she shows me: pictures of her face and arms looking charred.

She says her neighbors in Honduras threw gas on her and then a match. She spent three months in the hospital. So when Belle heard about the group of migrants traveling to the US, she didn’t think twice. She packed her bags in 20 minutes and joined.

Still, she dressed like a man to avoid harassment. But in Southern Mexico, Belle met a gay man. They bought a rainbow flag and began walking with it. Other LGBTQ migrants saw the flag and joined them.

“At every stop, in every city, we were more and more,” she says.

Related: Fado Bicha is forcing traditional Portuguese fado 'out of the closet'

Juanita is among the migrants who saw the flag and latched on. She’s a lesbian from Guatemala. She says the group stuck together because they were being harassed by others in the caravan. She says they’d get a head start in the mornings to keep their distance.

Juanita joined the group because she says her older brother tried to rape her. He suspected she was a lesbian and she says he hated her for that.

“One day he came home and said, ‘I am going to make you into a woman,’” she says. She says she fought him off but he beat her severely. She says he was sent to prison, but he bribed his way out. Juanita hid and moved around. In October, she joined the migrant caravan.

After the migrants arrived in Mexico City, a legal aid group paid for the LGBTQ contingent to travel separately by bus to Tijuana. There are around 80 of them.

Here in Tijuana, they sleep on the floor in one big room. It’s cramped with sleeping mats and clothes, and it smells of sweat.

Related: How a small church in Massachusetts became a destination for LGBTQ asylum-seekers from all over the world

But the conditions are good compared to the outdoor sports complex where the other migrants from the group are staying. There’s plenty of food here. And everyone here has access to lawyers.

The day I visit, the mood is festive. Eight couples here are getting married. Some have been together for years; others just met. 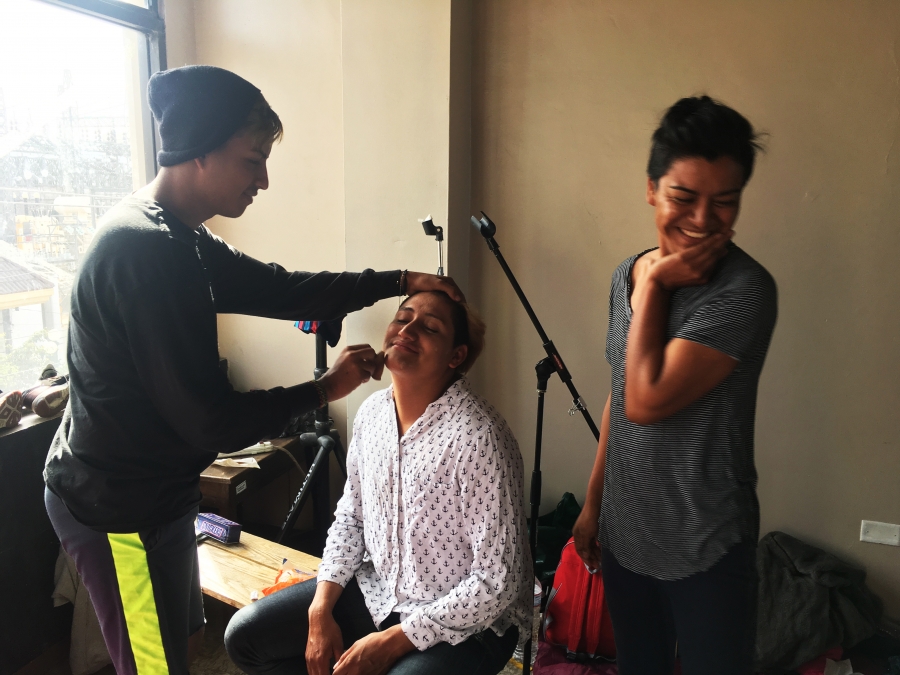 A few migrants prepare for the weddings by putting on makeup.

One woman, Sandy, says she fell in love during the journey with a woman from Honduras. Before this trip, Sandy didn’t tell anyone she was a lesbian. She says in Honduras, she secretly met women to date on Facebook.

There are also strategic reasons to get married. Lawyers say it strengthens their asylum claims because it shows migrants could face danger if they return to their countries. It could also help keep couples together during the asylum process.

But that’s not what people are thinking about on their wedding day. Everyone is getting ready, trying on dresses and putting on makeup. A volunteer arrives with a handful of silver rings in different sizes; the couples pick ones that fit. 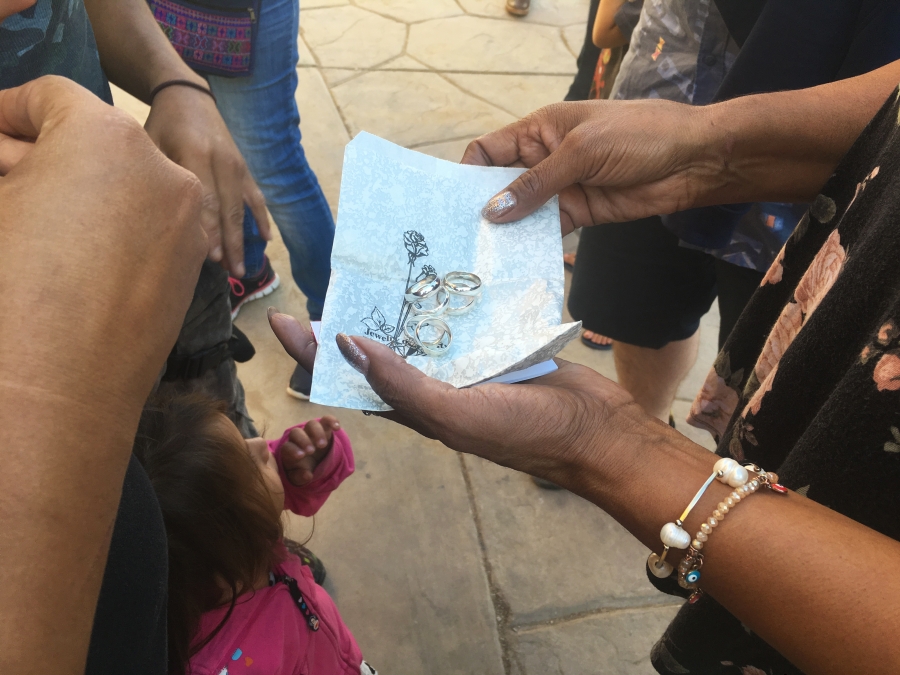 A volunteer offers a handful of silver rings in different sizes to migrants who are getting married. Each couple picks ones that fits.

Around 5 p.m., the couples converge on the balcony of the shelter. Ministers from the Unitarian Universalist Church of San Francisco perform the ceremonies. The ministers were here in Tijuana on an unrelated mission to support migrants when they were unexpectedly asked to marry the couples.

The couples promise to be faithful and to support each other. As they finish their vows, the other LGBTQ migrants chant “kiss, kiss, kiss!”

It’s a joyous moment. Also fleeting. The next morning, around half of this group leaves the shelter. They’ve been receiving threats in Tijuana, so they’re changing locations every few days for their safety.

Belle says this journey to the US — even with its jubilant moments — has been horrible. The migrants have suffered hunger, sickness and threats, she says.

“I wouldn’t wish it on anybody,” says Belle.

But she’s determined to keep going. She wants to get to New York City. She has a boyfriend there waiting for her. She also dreams of writing a book about her experience in the migrant caravan.