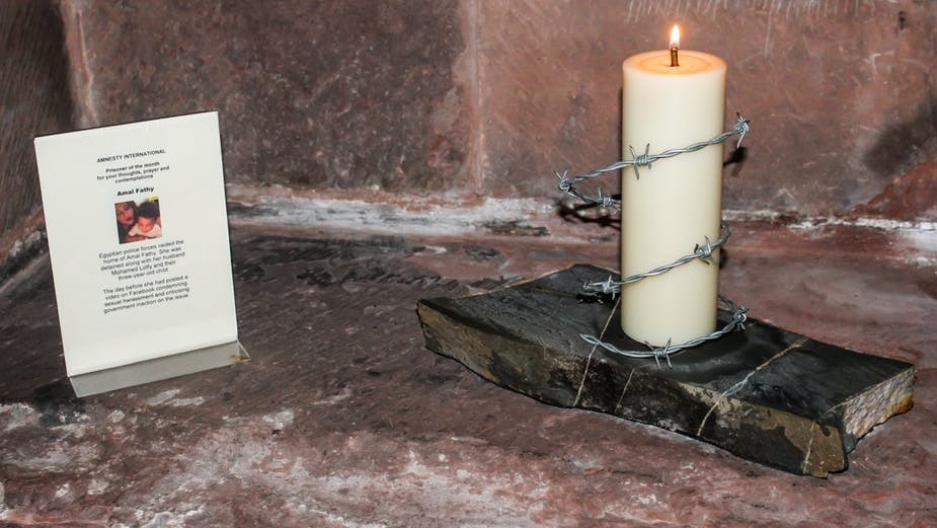 Amal Fathy, who languishes at a women's prison for speaking out against sexual harassment in Cairo, is honored at Carlisle Cathedral, Carlisle, UK.

They came in the middle of the night. At about 2.30 a.m. on May 11, Amal Fathy, her husband, Mohamed Lotfy, and their three-year-old child were awakened by Egyptian security personnel. For hours, a special forces detachment of seven armed men in uniform and two plainclothes officers raided their home.

Fathy, a former actress and fashion model, had posted a Facebook Live commentary expressing her anger about being sexually harassed two days earlier. In the 12-minute video, Fathy lamented how a taxi driver groped her and a bank guard verbally harassed her while grabbing his crotch.

Fathy, her husband and her child were taken to a local police station in Cairo’s Maadi district. A few hours later, Lotfy and their child were released, but Fathy still languishes in prison.

Everyone knows sexual violence exists in Egypt and across the world. But in my country, abuse has become so common that it goes unreported.

If someone refuses to accept such abuse, they become the odd one out. That’s what happened to Fathy. She decided to take a stand and share her story — and now she’s being punished for it.

Fathy was accused of broadcasting false news affecting national security and the possession of indecent materials. But this was not enough for the authorities. Two days after her arrest, Fathy was charged in State Security prosecution case number 621 with belonging to a terrorist group.

On Sept. 29, Fathy was handed a two-year prison sentence and a fine of $560 over the first set of charges. She paid bail of $1,120 to suspend the sentence pending appeal but remains in custody awaiting trial over the second set of charges.

During the rule of Abdul Fattah al-Sisi, a former army general who took power in a coup in 2013 and was elected president in 2014 and again in 2018, use of the internet has been restricted, monitored and often punished. The web, which contributed to the spread of the 2011 protests in Egypt, has been transformed into a double-edged sword, allowing Egyptian police and security agencies to identify opponents and muzzle them.

Related: Five years of Sisi’s crackdown has left ‘no form of opposition’ in Egypt

Sisi’s obsession with controlling civil society organizations and common citizens was enshrined in a repressive law, approved by parliament on June 5, which legalizes censorship of the internet, enables authorities to block websites, and imposes heavy fines and detention on those who break it.

This “cybercrime” law gives the investigating authority, such as the police, the power to block a website whenever content is deemed to be a threat to national security or the economy. The blocking order has to be executed by internet service providers as soon as they receive it, enabling security officials to ban a website before any judicial authority can issue a decision.

The new law establishes the comprehensive surveillance of communications, requiring communications companies to store users’ data for 180 days and obliging telecoms providers to hand over detailed information about users’ communications, including voice calls, text messages, website visits, and the use of apps on laptops and smartphones. Service providers are also required to provide national security agencies and police officers with the technical facilities and assistance needed to exercise their power.

Criticized by rights groups as being excessively vague, the law can impose a range of 29 penalties on offenders, ranging up to five years in prison and fines of $1.12 million. And there is more — a regulation approved by parliament on June 10 imposes sanctions on any individuals with a personal website, blog, or online account with more than 5,000 followers. It forbids the publication or dissemination of false news, incitement to violence or hatred, discrimination, intolerance, defamation of individuals, and an insult to religious beliefs.

According to a report issued by the Fédération Internationale des Droits de l’Homme, the law is part of a framework “whose goal has not only been to suppress most fundamental freedoms, but also to guarantee total impunity to the various security forces and intelligence agencies involved in the implementation of these laws.”

Amal Fathy has now spent six months at the al-Qanater women’s prison. She frequently suffers from panic attacks and has complications in her left leg after prison doctors took more than two weeks to give her the correct medication.

Many suspect Fathy’s arrest is a message to her husband, Mohamed Lotfy, the executive director of the Egyptian Commission for Rights and Freedom. ECRF provides legal assistance to Egyptians, and its reports on human rights abuses have been a thorn in the regime’s side. Since 2015, ECRF staff have regularly been harassed by Egyptian security agencies. Some, such as Mina Thabet and Ahmed Abdallah, spent months in prison, while others, including Lotfy, have been included on a travel ban list.

ECRF also provides assistance to the family of the slain Italian researcher Giulio Regeni. Fathy’s detention came as the Egyptian authorities were negotiating with Italian prosecutors seeking images of Cairo’s underground transport system where Regeni may have been seen for the last time. Such abuses are becoming commonplace in Egypt.

More than 7,500 civilians have faced a military court since October 2014. Last May, several activists, bloggers and journalists were arrested for expressing their opinion, among them the video blogger Shady Abu Zeid, the liberal activist Shady Ghazaly, labor rights lawyer Haitham Mohamedeen (freed at the end of October) and the award-winning journalist and blogger Wael Abbas. A police raid on Nov. 1 led to the arrest of 19 human rights defenders, among them Hoda Abdelmoneim, a former member of the National Commission for Human Rights.

Related: The arrest of an Egyptian satirist shines a light on the government's system of intimidation

These detentions violate the Egyptian constitution — Article 57 guarantees citizens the right to privacy — and minimum international procedural standards. However, they are only the tip of the iceberg. According to some estimates, at least 60,000 political prisoners are languishing in overcrowded cells. The Egyptian state, it seems, wishes to annihilate any kind of opposition.

In such an environment, a woman who dares to express her frustration over being harassed twice in the same day is easily transformed into a criminal subject.