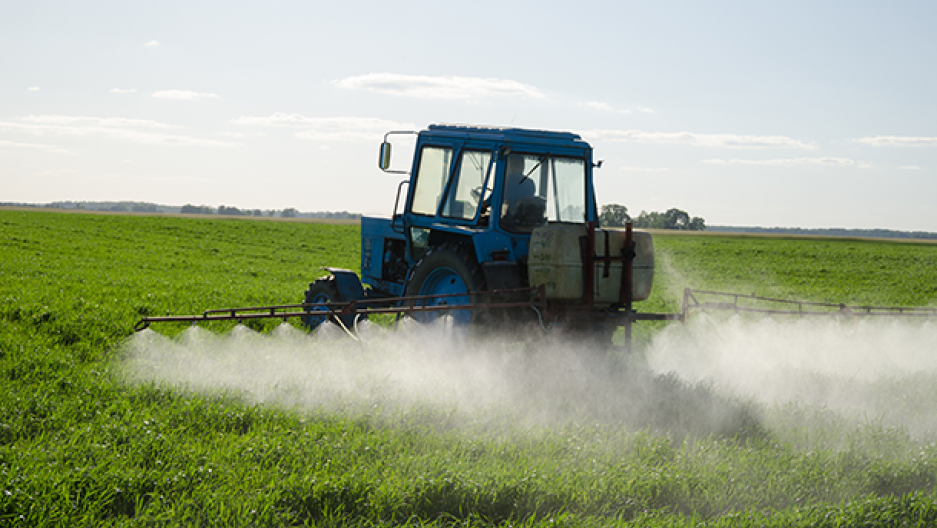 A tractor sprays farm chemicals in a field. A growing body of scientific evidence links the herbicide Roundup, produced by Monsanto, to cancer and other illnesses.

Pharmaceutical and chemical giant Bayer has shed some $20 billion in market value in the weeks since a California court ordered it to pay $289 million in damages to plaintiff Dewayne Lee Johnson, related to his use of the herbicide Roundup.

Jurors found that Monsanto, now owned by Bayer in a $66 billion merger, had acted with malice and negligence in failing to warn Johnson, a former school groundskeeper, about the cancer risks associated with Roundup and its key ingredient, glyphosate. Johnson is now suffering from late-stage non-Hodgkins lymphoma.

The German-based company Bayer merged with Monsanto in June 2018, just two months before the California jury ruled unanimously in favor of Mr. Johnson. Now, Bayer is on the hook for the $289 million in damages.

Carey Gillam, a journalist who has reported extensively on Monsanto, places the blame for Bayer’s predicament on executives who failed to properly warn their shareholders that this potential liability existed.

“Investors were stunned by this very large verdict,” Gillam says.

"And, of course, there are thousands of other lawsuits making very similar claims that will rely on similar evidence," Gillam says. "We're talking about billions of dollars in potential payouts and damages. At some point, if these things continue to snowball and the plaintiffs continue to win, there will be settlement talks. The numbers that I've already heard tossed around are 3 to 5 billion dollars."

Gillam notes that the verdict is part of “a building of concern around the world” about the health effects of glyphosate. Various cities and states across the US as well countries throughout the world have already taken steps to restrict or ban glyphosate products and now that trend is likely to accelerate.

“Every bit of news on this obviously causes heightened concern with consumers,” Gillam says. “We’re seeing some retailers talk about pulling these [products] from their store shelves. This is definitely resonating around the world.”

Monsanto has asked for a new trial and also requested the judge to reduce the damage award. Gillam believes there is little chance that either of these things will happen, in part because the judge was “very favorable and generous to Monsanto” during the trial, agreeing to withhold incriminating information about Monsanto from the jury.

“They didn't want people to know about a ban in Europe on one of the key ingredients [glyphosate] in the Roundup products. The judge sided with them on that,” Gillam explains.

"They didn't want people to know that California had ordered companies to start putting warning labels on Roundup and other glyphosate products. The judge sided with them on that. A lot of information like that was kept from the jury and still, they came up with this huge verdict against Monsanto."

Monsanto attorney Kirby Griffis had made his name defending tobacco companies and helped Monsanto employ deceptive strategies to hide the connection between tobacco and lung cancer, Gillam says. Monsanto wanted to prevent any comparisons to the tobacco industry during the trial and the judge largely sided with them on this, too.

Nevertheless, the jury found enough scientific evidence to connect Monsanto's Roundup herbicide to Mr. Johnson’s cancer, and also found that Monsanto had acted with malice and negligence by refusing to warn people of the direct connection between glyphosate products, cancer, and a range of other illnesses, as evidenced by independent scientific studies.

Related: Inside Monsanto’s day in court: Scientists weigh in on glyphosate’s cancer risks

Like the tobacco companies, Monsanto has long been aware of these connections, Gillam says.

“This wasn't about banning glyphosate,” she explains.

"It was about warning consumers about known risks and Monsanto didn't do any of that. They did the opposite. They tried to suppress that information, tried to hide it and tried to discredit scientists who raised those warning bells."

The jury also seemed moved by the fact that Mr. Johnson had called Monsanto himself and never received an answer, Gillam adds.

“He'd been diagnosed with cancer [and] he was worried about whether or not he should continue his job, whether he should continue spraying these products and Monsanto never got back to him and they never warned him,” Gillam says. “The jury really seemed to take issue with that.”

Asked for comment, Bayer responded in part: “Bayer stands behind its glyphosate-based products and we are confident that the company will ultimately prevail in this litigation based on the extensive body of favorable science.”