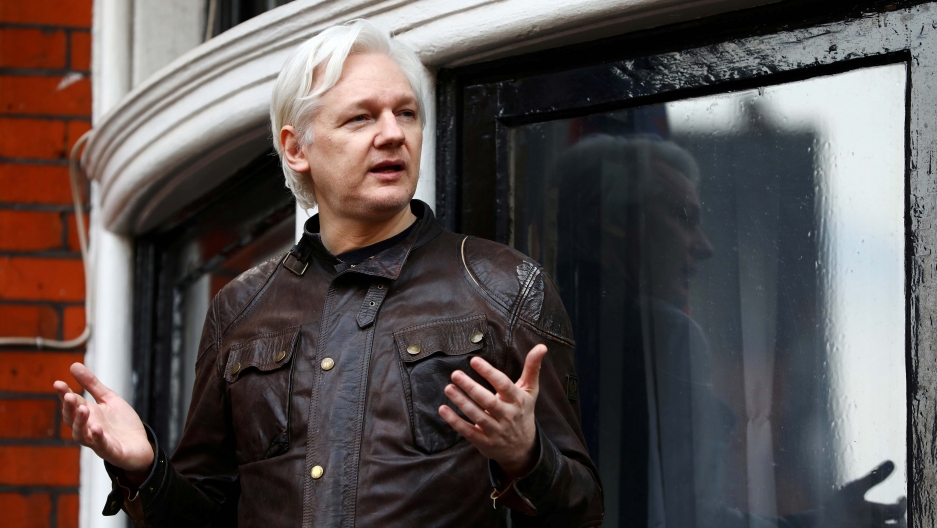 WikiLeaks founder Julian Assange is seen on the balcony of the Ecuadorian Embassy in London, Britain, May 19, 2017.

According to a Thursday filing in an unrelated criminal case in a Virginia federal court, US prosecutors have obtained a sealed indictment against Wikileaks founder Julian Assange.

The charges were not immediately clear. Thursday's filing had been sealed, but was made public this week for reasons that were also unclear, according to a person familiar with the matter.

Joshua Stueve, a spokesman for the US attorney's office in Alexandria, Virginia, said the filing was made in error. Wikileaks said in a Twitter post that it was an "apparent cut-and-paste error." Assange could not be reached for comment.

Lawyers for Assange and others have said his work with Wikileaks was critical to a free press and was protected speech.

"The notion that federal criminal charges could be brought based on the publication of truthful information is an incredibly dangerous precedent to set,” Barry Pollack, a US lawyer for Assange, said in a statement.

The disclosure came as US Special Counsel Robert Mueller investigates possible Russian interference in the 2016 US presidential election, and possible collusion by US President Donald Trump's White House campaign.

US intelligence agencies have concluded that Russia obtained material through hacking, and Mueller's office has brought various criminal charges against Russians and Trump associates.

For its part, Wikileaks has faced scrutiny for publishing emails hacked before the election from the Democratic Party and the campaign chairman for Hillary Clinton, who Trump defeated.

Trump and Moscow have denied any interference or collusion.

Assange received political asylumn from Ecuador and has lived in the South American country's embassy in London since 2012 to avoid possible extradition to Sweden in a separate sexual molestation case.

Criminal charges in the United States would add pressure on Britain to extradite Assange, an Australian national.

US officials have acknowledged that federal prosecutors in Virginia have been conducting a lengthy criminal probe into Assange and Wikileaks.

The judge wrote in a detention memo that the defendant, Seitu Sulayman Kokayi, "has had a substantial interest in terrorist acts."

Reuters was unable to locate Kokayi.

According to the filing, prosecutors sought to keep the charges confidential until after Assange's arrest, to ensure he did not evade or avoid arrest and extradition.

Any procedure "short of sealing will not adequately protect the needs of law enforcement at this time because, due to the sophistication of the defendant, and the publicity surrounding the case, no other procedure is likely to keep confidential the fact that Assange has been charged," the filing said.

Greg Barns, an Australian lawyer advising Assange, said in a statement it was "no surprise" that the United States was seeking to charge Assange, and Australian officials should allow Assange to return there.

Assange was initially welcomed at Ecuador's embassy, but Ecuador said last month it would no longer intervene with Britain on his behalf.

In a statement on Friday, Wikileaks said Assange was willing to work with British officials as long he was not extradited to the United States.

Wikileaks gained prominence in 2010 after publishing a classified video showing a 2007 US helicopter attack in Iraq that killed a dozen people, including two Reuters news staff.

It has also released thousands of classified US military documents, among other disclosures.

US Secretary of State Mike Pompeo has called Wikileaks a "hostile intelligence service," making that comment in April 2017 when he ran the U.S. Central Intelligence Agency.

Trump praised Wikileaks during his 2016 campaign.