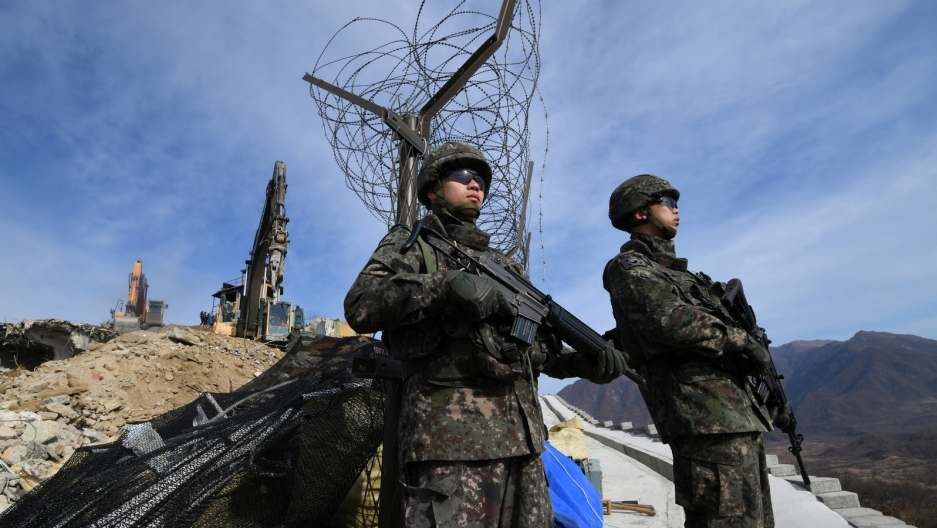 After an exciting revival, diplomatic relations between North Korea and the United States are sputtering to a standstill — and it’s largely because the US won’t budge on sanctions, some experts say.

November was hardly a month of victories for US-North Korea relations. For one, the US and South Korea started up their joint military exercises again. Then, North Korea’s Foreign Ministry threatened to reinstate a policy that prioritizes nuclear weapons development if the United States doesn’t lift economic sanctions very soon. And last week, a key meeting between North Korean officials and US Secretary of State Mike Pompeo was postponed.

Related: Learning of threats in the shadow of war

From North Korea’s perspective, the tension is a matter of simple math: Kim Jong-un has made a lot of concessions to show good faith, but the United States has offered little in return. Since his historic face-to-face meeting with President Donald Trump five months ago, Kim has repatriated US soldier remains from the Korean War, dismantled a “key” missile-engine test site, removed landmines along the Korean border and cleared out 11 guard posts in the Demilitarized Zone. In that same time period, the United States halted joint military exercises with South Korea — and now, even those are back in play.

“The US administration really has to decide: Is it actually willing to do anything?” said Jenny Town, a research analyst at the Stimson Center and managing editor of the analysis site 38 North. “If we’re not willing to budge on the [things] that North Korea would want from us, then negotiations are going to be very short-lasting.”

“We really have to start a conversation about removing sanctions,” agreed C. Harrison Kim, an assistant professor at the University of Hawaii at Manoa who studies socialism in East Asia and North Korea. “The US hasn’t really shown any true proof that it is willing to work with North Korea and it hasn’t shown the world that it’s taking the next step.”

The case for lifting sanctions

“Speaking as an outsider, of course, I would support the lifting of sanctions straight away,” said Peter Ward, a former Asan Institute researcher and a Seoul-based columnist for NK News (Ward is worried about sanctions blocking aid from humanitarian workers trying to help North Koreans in poverty). “But from America’s point of view — the point of view of people who want disarmament — it’s probably not a good idea to lift sanctions unilaterally.”

Ward, Town and Kim all believe it’s high time the United States considers lifting sanctions. But even they have caveats: If done, the Trump administration should pursue a bit-for-bit system with clear, specified rewards and consequences.

“They should hash out an agreement right now so that the North Koreans get some sanctions relief and the Americans get some nuclear disarmament, and they can go from there,” Ward agreed.

The Trump administration has long pledged that it will not lift sanctions until North Korea denuclearizes. But surely, most countries would be hesitant to give up its only deterrent to war — especially to a nearly 70-year adversary.

“This idea that you’re going to backload a process and say North Korea is only going to get rewards and concessions at the end, after they’ve done everything, is just unrealistic,” Town said. “There’s not enough trust between the two countries for that scenario to have any credibility.”

Yet the United States doesn’t seem like it’s willing to budge. Vice President Mike Pence recently reaffirmed his desire to keep up sanctions during a Nov. 13 meeting with Japanese Prime Minister Shinzo Abe. And in the near future, it’s possible that the Trump administration will become too distracted with a Democratic majority in the House of Representatives to really hammer down key details on North Korea.

In the meantime, South Korean President Moon Jae-in is left with an increasingly difficult challenge. He has to keep breathing momentum into his renewed relations with North Korea, even though much of the economic support he promised can’t move forward until sanctions are lifted. For now, that means gifting North Korea 200 tons of Jeju Island tangerines and pushing for an inter-Korean railway system.

“I think that [North Korea] has shown that it is willing to change. As long South Korea is its partner, I think we can see that happening,” Kim said. “The lifting of sanctions is paramount for South Korea, but at the same time, there are so many other things to work on.”