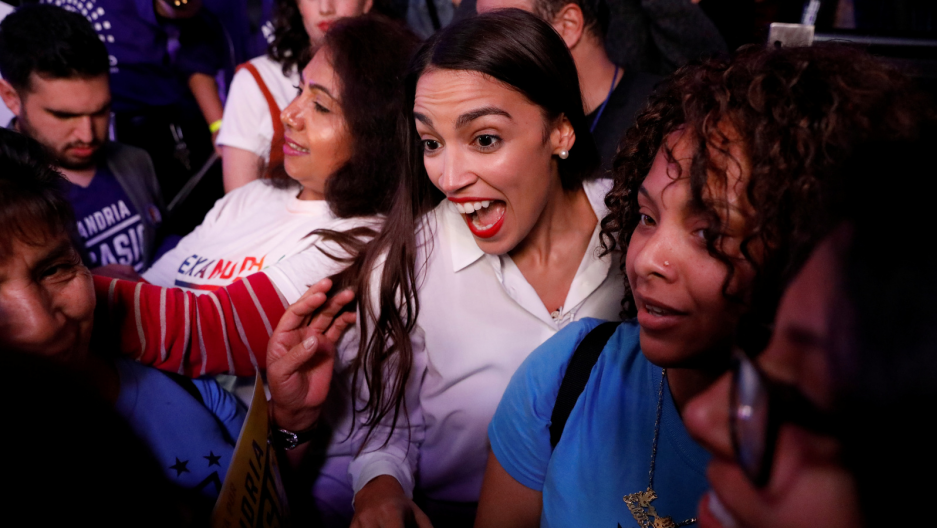 The November 2018 election in the US will go down for a number of firsts. The first Somali American Muslim woman to be elected to office. The first Native American woman sent to Congress. And a record number of women elected to the House of Representatives. Currently, there are about 100 women headed to the House.

That’s a pretty big deal here in the US. But, let’s be real: that’s less than one-quarter of the House.

Other countries have tried different things to level the playing field for women in government.

Let’s back up a few years. When a reporter asked the new Canadian Prime Minister Justin Trudeau why it was important for him to have as many women as men in his cabinet, he said, “Because it’s 2015.” A crowd erupted in cheers.

When Trudeau's ministry was first sworn in, it included 15 men and 15 women, plus Trudeau. His current cabinet includes 17 women and 18 men.

It’s 2018 and most countries — including the US — still don’t have gender parity in government, whether elected or appointed.

Related: These are the women who made history in this year's midterm elections

Some do, like Cuba and Sweden. Some of that has to do with making gender representation a priority. In other cases, however, it’s about setting quotas for women in government.

Currently, 24 countries have some form of a gender quota in government. Catalina Uribe Burcher of the Institute for Electoral Assistance in Stockholm says quotas can produce a ripple effect.

“So, when women manage in some countries also to gain those positions of power and decision-making, it just not only affects the political landscape in the country but the whole perception of women in general in all other fields of life.”

Uribe’s group tracks women’s participation in politics. She says, yes, the election of a record number of women to the US Congress is great. But other countries are still way ahead.

“In comparison to the position of women in politics in Bolivia, Rwanda and Ethiopia, which are probably not the expected examples. They are more the unusual suspects. But they have done so many gains in terms of women in politics, not least because of quotas,” said Uribe.

In 2003, Rwanda adopted a quota system reserving 30 percent of seats in government for women.

Today, women make up 61 percent of the parliament.

Last month, Ethiopia’s prime minister announced that half of his cabinet would be comprised of women. And the parliament appointed the country’s first female president. It’s a largely ceremonial post but it’s still seen as a step forward for women there.

So, are quotas the answer to increasing women’s influence in government?

Some say that quota systems depend on who holds the power in the first place.

“Bringing women in the institutions and leadership does not mean automatically that they have power,” said Rosebell Kagumire, a feminist blogger and journalist in Kampala.

Uganda has had a gender quota for more than 20 years and she says it still hasn’t made that much of a difference in women’s lives. Especially when it comes to enacting laws that affect women.

“Despite the increased number of women in the parliament, you'll see a lot of legislations that are targeting women in Uganda,” said Kagumire.

Kagumire mentions a bill that would increase the penalty for sexual assault. She says it’s something that would protect women in Uganda, but it’s been stalled for decades — even with more women in parliament.

“We're not seeing women being vocal to bring these laws to actually get passed. So, we still have gaps,” Kagumire explained.

So, quotas for women in government don’t always translate into more power and gains for women. For instance, Saudi Arabia has a 20 percent quota for women in its legislature, which is way higher than the percentage of women in their congress right now. But Saudi women only got permission to drive this year.

Still, Erin Vilarde of the group RunVoteLead says the US should think about gender quotas — even though she knows it’s unlikely.

“It's what you need to do take get to the norm of women running at every level,” Vilarde explained.

RunVoteLead helps women run for office. They show them how to fundraise and run a successful campaign. Ilhan Omar, who just won the election in Minnesota, is one of their graduates.

Vilarde doesn’t like the term quotas. It’s patronizing, she said. But she thinks it’s critical for governments to be more representative of those they serve. And if that means quotas …

“It’s a way to accelerate that and normalize women in public office because if you just wait for the old systems to actually, you know, all of a sudden open up and welcome women and give them the resources they need, that’s not going to happen,” Vilarde said.