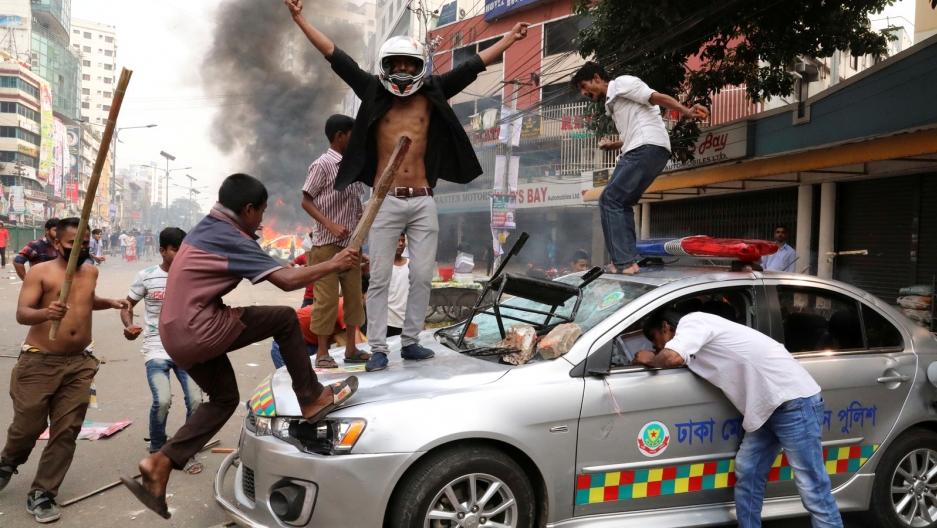 Bangladesh police fired rubber bullets and tear gas at opposition party supporters in the capital Dhaka on Wednesday as tension soared weeks before a general election.

Activists of the Bangladesh Nationalist Party set fire to police vans, cars and motorbikes, according to police and media.

"Our force was attacked without any reason. They were only trying to ease the traffic flow but suddenly they were targeted," said Masudur Rahman, a spokesman for the Dhaka Metropolitan Police.

The BNP supporters had been accompanying an election candidate who was picking up election nomination papers from the party's offices in the city.

Police initially asked the group of more than 500 people to disperse because they were creating a traffic jam but an altercation ensued and fistfights broke out.

BNP Secretary General Mirza Fakhrul Islam Alamgir denounced the police action as an "injustice," and part of a government plot to exclude the party from the Dec. 30 election.

Minister of Home Affairs Asaduzzaman Khan told reporters that authorities would check video footage of the confrontation and take legal action against those identified as having attacked the police or set fire to vehicles.

Unrest usually breaks out during general elections in Bangladesh, where politics has for more than two decades been dominated by the rivalry between two women leaders — Sheikh Hasina, the current prime minister, and former premier Khaleda Zia — who are both related to former national leaders.

The BNP is in disarray following the jailing early this year on corruption charges of Zia, on what the party says were trumped-up charges to keep her out of politics.

The last election, in 2014, which the BNP boycotted, was marred by deadly violence and criticized by international observers as flawed.

An alliance of opposition parties, including the BNP, said on Sunday it would contest the election despite the Awami League's rejection of the demand for a caretaker government.

The alliance met with the Bangladesh Election Commission on Wednesday to ask for the election to be delayed by another three weeks to allow more time for organizing and campaigning. The commission has not yet responded to the request. The poll has already been delayed one week.

Hasina’s government has won global plaudits for letting in hundreds of thousands of Rohingya refugees from Myanmar, but its critics accuse it of increasing authoritarianism.

In particular, they have attacked Hasina for what they say was the government’s heavy-handed policing of student protests this year and a crackdown on free speech.