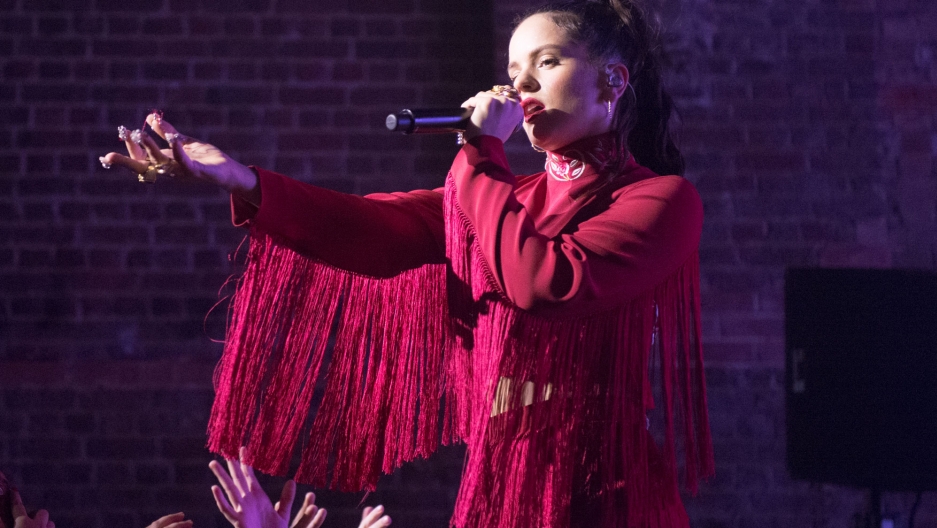 Rosalía Vila Tobella is up for five Latin Grammys this Thursday — the second-most nominated artist behind reggaeton giant J Balvin. A pop sensation credited with revolutionizing flamenco, the singer known simply as Rosalía had been steadily gaining traction for a few years when her smash hit, “Malamente” (“Badly”), released in May this year, shot her to stardom.

A masterful fusion of flamenco, trap and R&B, the song's accompanying music video is a Beyoncé-like, high-production affair that puts a modern, and urban, spin on the age-old genre. In one shot, Rosalía circles a bullfighter on a motorcycle, alternately glaring and smiling coyly at her prey. Was it a contemporary, feminist reclaiming of a traditionally masculine trope? If there was any doubt as to her feminist messaging, the second hit she dropped in July, “Pienso en tu mirá” (“I think of your gaze”), made it clear. “Rosalía launches an attack against macho violence and breaks the internet,” one local outlet said.

When “El Mal Querer” was released Nov. 2, it was lauded as a feminist concept album. Each song in it is a chapter in a larger story about a woman escaping the shackles of a jealous, abusive lover, culminating with the freedom anthem, “A ningún hombre” (“To no man.”)

But to many members of Spain’s Roma community, Rosalía’s success and labeling as a feminist icon are beside the point, if not altogether vexing.

“If you stick feminist slogans in your songs but then contribute to the oppression of other women through your actions and capitalist practices, that’s not being a feminist, that’s being a poseur,” the Association of Feminist Gitanas for Diversity said in an email to The World.

Throughout her rise to fame, Rosalía has been mired in a debate over her supposed appropriation of an art form with gitano origins. The 25-year-old star is not gitana, nor is she from Andalusia, the birthplace of flamenco. She’s from Catalonia, the northern Spanish region now famous for its independence bid last year. She’s been accused of capitalizing on southern, gitano culture — for adopting an Andalusian accent, sprinkling Caló (the Spanish Romani language) into her songs, dressing like a gitana and using Roma imagery in her music videos.

There are two ways of seeing this: Either Rosalía can’t get a break, or the whole debacle is evidence of an extremely marginalized community’s anger at having its symbols and tropes launch an “outsider’s” career. The Rosalía appropriation debate is a look into the murky intersection of feminism and cultural hegemony in Spain and, more broadly, in the music industry.

Along with many other members of Spain’s Roma community, the Feminist Gitanas association is irked by what it sees as Rosalía’s refusal to credit gitanos for their “fundamental contribution” to flamenco as a genre. In a July interview with Spanish newspaper El Mundo, Rosalía responded to appropriation allegations by saying that “flamenco does not belong to the Gypsies.”

“We’re not asking for copyright, but recognition,” the association said.

There are several theories out there, but most agree that flamenco originated as a mix of Moorish, Jewish and Roma folkloric musical traditions. Today, the genre is intrinsically tied to Andalusia and the Roma community. The music, a mournful exultation you can hear in raspy, belted vocals, tells of the Romani people’s repression and persecution through the ages, from extermination campaigns to repressive laws designed to stamp out their culture (the last overtly anti-Roma laws were only repealed in 1978 in Spain).

Rosalía detractors claim that the Catalan artist’s global success is proof of the Roma’s continued marginalization across all industries.

“Flamenco is suffering a kind of institutional racism that whitewashes the art form and markets it like a piece of meat wrapped up in plastic,” leading gitana activist Noelia Cortés said.

Cortés and the association contend that a strong current of anti-gypsyism in Spain has long barred Roma artists from the kind of success a woman like Rosalía can enjoy. According to the EU’s Agency for Fundamental Rights, 98 percent of Romani in Spain live in poverty. Unemployment hovers around 36 percent, according to the Gitano Secretarial Foundation — a number disproportionately higher than other ethnic groups in Spain.

“Rosalía has unprecedented support from the music industry, which has made her popular thanks to well-planned marketing campaigns,” the association added. “This is nothing more than the demonstration of white privilege.”

But as others have pointed out, these kinds of attacks run the risk of airing sexist sentiments.

One Twitter user wrote, “Why is that every time a woman triumphs people think [her success] is at the hands of someone else, as if she were a useless doll?”

“Rosalía is an artist who knows what she wants and who works hard to achieve that,” music critic Víctor Lenore said. She studied flamenco under the tutelage of a local flamenco fixture for eight grueling years before launching her first album, “Los Angeles,” in 2017; and she writes, composes and produces her work.

Though Lenore dismisses the appropriation charge — some flamenco greats like Paco de Lucía weren’t Roma either, he says — he concedes that the press only ever pays heed to “fashionable [gypsies].” “Having a good stylist is more important than having a good repertoire. That can’t ever be good for art,” he said.

The Latin Grammy winners will be announced Thursday in Las Vegas.