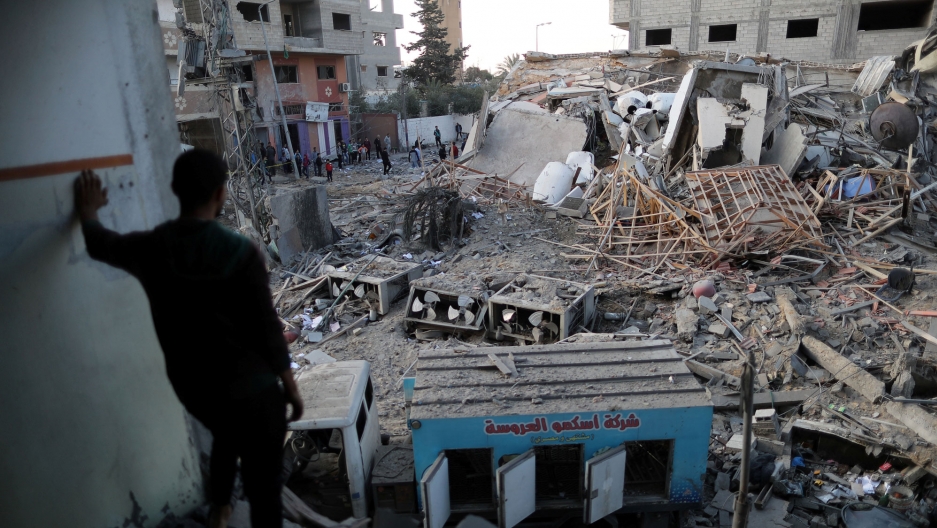 A Palestinian man looks at the remains of Hamas's TV station building that was destroyed by Israeli air strikes, in Gaza City, Nov. 13, 2018.

In what has become the worst surge of violence since 2014, Israel continued its air strikes on Gaza on Tuesday as Palestinians kept up rocket fire on Israeli territory.

The fighting — that has killed six Palestinians, five of them militants, and a civilian in Israel since Monday — threatened to derail efforts by the United Nations, Egypt and Qatar to broker a long-term truce and head off another major conflict in the impoverished enclave.

Hamas, Gaza's dominant Islamist movement, and other armed factions launched more than 400 rockets or mortar bombs across the border after carrying out a surprise guided-missile attack on Monday on a bus that wounded an Israeli soldier, the military said.

The salvoes were the fiercest since the 2014 Gaza war between Israel and Gaza militants. Hamas said it was retaliating for a botched Israeli commando raid in Gaza that killed one of its commanders and six other gunmen on Sunday. An Israeli colonel was also killed in that incident. 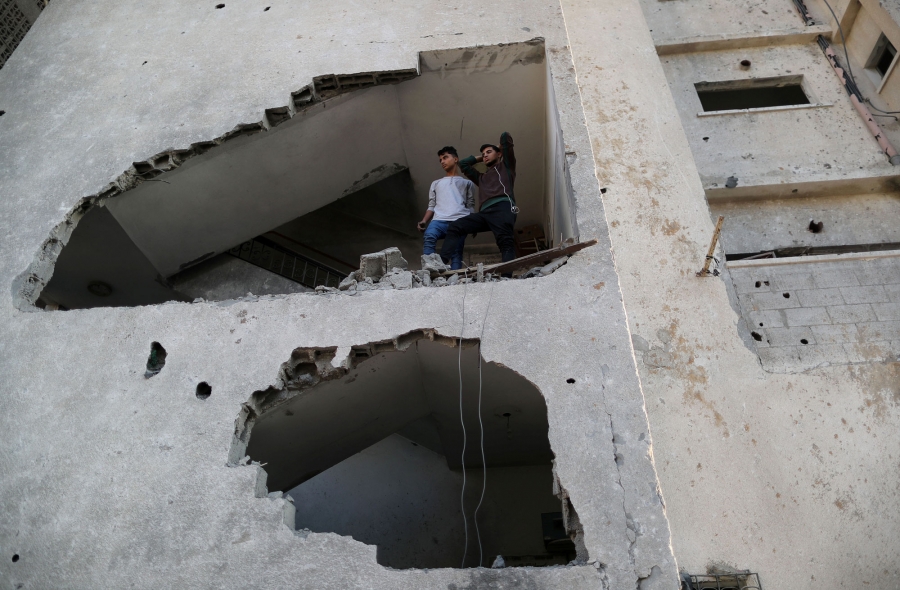 Palestinians look out of their house that was damaged in an Israeli air strike, in Gaza City, Nov. 13, 2018.

Sirens rang out in the Israeli port of Ashkelon overnight and in other southern towns into Tuesday morning, sending residents rushing to bomb shelters. Several homes were hit and the military said Israel's Iron Dome anti-rocket system intercepted more than 100 rockets and mortar bombs.

Israel responded with dozens of air strikes against Gaza, hitting buildings overnight that included a Hamas intelligence compound and the studios of Hamas's Al-Aqsa Television, whose employees had received advance warnings from the military to evacuate.

In aerial attacks on Tuesday, Israel's military said it struck a rocket-launching squad and fired at several Palestinians infiltrating through Israel's border fence.

In Gaza, schools, government office and banks were closed on Tuesday. Classes were also canceled in Israeli towns near the border.

Prime Minister Benjamin Netanyahu convened his security cabinet to discuss Israel's next moves and the military said it had sent infantry and armored reinforcements to the Gaza frontier.

A Palestinian official said Egypt and the United Nations had stepped up efforts with Palestinian factions and Israel to end the current round of fighting "and prevent further escalation."

A statement issued by militant groups in Gaza said Ashdod, a major Israeli port, and Beersheba, the biggest city in southern Israel, would be hit next if Israel didn't cease fire.

Egypt urged Israel to back down. The United States, whose peace mediation has been stalled since the seven-week war in 2014, condemned Hamas.

Lieutenant-Colonel Jonathan Conricus, an Israeli military spokesman, said Hamas and the Islamic Jihad group have more than 20,000 rockets and mortars, some capable of reaching Israel's main cities of Tel Aviv and Jerusalem.

In Gaza, Israeli missiles completely flattened four multi-floor buildings, including the TV station, and three other homes. Witnesses said warning missiles, which carry small warheads, were fired first, hitting but not destroying the outer walls of the seven structures.

Abdallah Abu Habboush, 22, said he was awakened by shouts from neighbors to get out of his residential building after what Israel terms the "tap on the roof" warning.

"(An Israeli) missile destroyed the whole structure," Abu Habboush said, adding that he had no idea why it was hit. Conricus said all of the buildings hit by the Israeli military were "owned, operated and used by Hamas."

In Ashkelon, where a rocket gutted an apartment building, killing a resident and critically wounding another, a neighbor told Israel's Channel 10 news: "The ringing in my ears — they told me it would take a long time until my hearing returns."

Violence has simmered since Palestinians launched weekly border protests on March 30 to demand the easing of a blockade on Gaza and rights to lands lost in the 1948 war of Israel's founding. Israeli troops have killed more that 220 Palestinians during the confrontations, which have included border breaches.

A Qatari cash infusion of $15 million last week appeared to dampen Gazan anger. On Sunday, Netanyahu said he hoped to reach an "arrangement" to avoid another Gaza war and ease Palestinian economic hardship.

Hamas, which is branded a terrorist group in the West, and Israel have fought three wars in the last decade.

By Nidal al-Mughrabi and Jeffrey Heller/Reuters