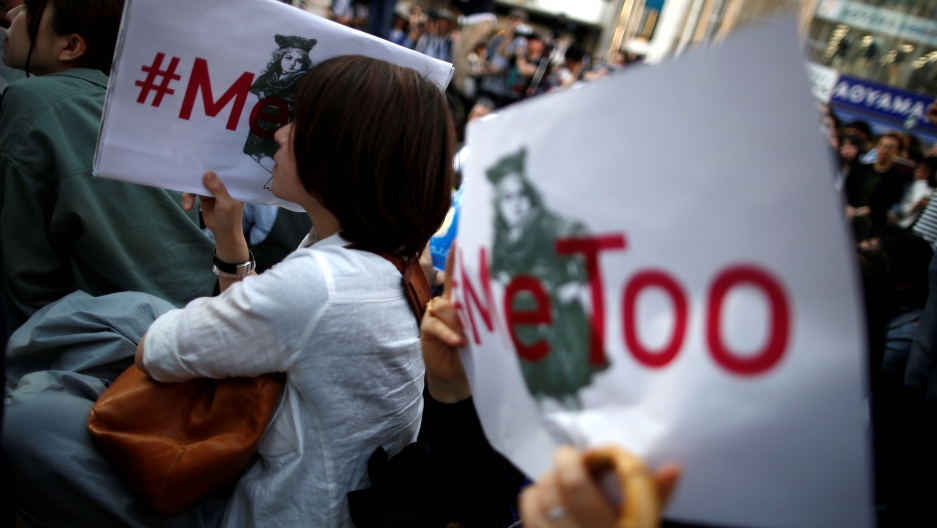 Protesters hold placards reading #MeToo during a rally against harassment at Shinjuku shopping and amusement district in Tokyo, Japan, April 28, 2018.

Hana says she’s never heard of another woman going through what she did.

“My case is really so rare. The rarest of rare,” she said.

Hana is not her real name. She’s 29, and she started working as a secretary at a small company last spring. Soon after, her boss began insisting that she tell him with whom she socialized outside of work. Her boss is in his 50s and has a wife and two daughters who live far away. Hana says at first, she felt it was her job to take care of him. He’d regularly ask her to go out with him and have a drink.

“Then, he would ask what kind of sex I like. He asked me those questions daily,” she said.

Hana says because he hired her, she had to endure his questions. But then his behavior got even worse. When they went out to lunch with clients, her boss would become jealous and yell at her.

“Like in front of everybody,” she said. “He would complain that I was flirting with everyone. The yelling was so irrational that the whole restaurant would become still. That happened often.”

Hana told her friends about what happened to her, but she didn’t share it on social media. She didn’t use the hashtag #MeToo. Women who have told their stories publically in Japan have been shamed. The face of #MeToo in Japan is a journalist named Shiori Ito who says she was raped by Noriyuki Yamaguchi, an older journalist and biographer of Prime Minister Shinzo Abe. Ito came forward publicly in May 2017.

“I think no one wants to share such a private and horrific experience of rape. And I didn't want to,” she said in an interview with France 24. “But what I wanted to do was change what I experience afterward in Japan. There is so little help that we have in Japan, socially and legally, and that is the main reason why I spoke out.”

But prosecutors dropped her case, citing a lack of evidence. And speaking out made her a target. Ito started getting death threats. She later moved to the UK to escape the backlash. But since that time, a top bureaucrat in Japan’s Ministry of Finance resigned after an audio recording was released of him making sexually explicit comments to another female reporter.

The reporter who released the recording said she felt empowered by Ito. But she still wanted to remain anonymous.

But even with this Japanese spin on the #MeToo movement, change may be hard to come by — in part because sexual harassment is not a criminal offense in Japan.

“It is a big issue, but it’s not dealt with as a big issue,” said Kaori Sato, who founded a labor union that supports women who have been sexually harassed or assaulted at work. “It’s dealt with as a very small issue. Even though most victims’ lives are torn up by it, like mine was.”

Sato says for 2 1/2 years, her boss harassed her. She got to a point where she considered killing herself.

Related: Slow to start, Japan is finally having a #MeToo moment

“The company that I used to work for didn’t do anything for me, and there wasn’t a system in Japan that would help me or cover my salary or the medical expenses,” she said.

So, Sato sued the Japanese government and was awarded workers' compensation, which set a precedent in Japan. After that, she started hearing from other women and realized she wasn’t alone. She says that even when women come forward publicly, the people in leadership positions are mostly men, and they often won’t listen or take them seriously. But still, women have to keep trying.

“As long as we don’t give up, we don’t stop; we can change the rules and laws in Japan,” she said.

But not everyone is on board for the fight. Hana, the secretary who was harassed by her boss, thinks it’s natural that men are in charge.

“Japan is a country where men are more powerful than women. A country where domineering husbands exist, a culture that says women should stay home,” she says. “That may be gradually changing and working couples are becoming the norm.”

But Hana says men can’t have babies and women menstruate, which makes them more emotional. And she says men think more calmly and objectively and should call the shots.

“I am all right with men having power over women,” she said.

Hana says her own boss did terrible things to her, but she has no intention of suing him because he has a family. The company didn’t have a human resources department, but Hana did complain to the chairman of the board. At first he didn’t believe her, but then she showed him the inappropriate text messages her boss had sent her. After that, her boss apologized, but his aggressive behavior continued. So, after two months, she quit.

Recently, Hana started a new job. It will be her responsibility to ensure employees feel safe and secure, mentally and physically. She'll work to prevent the type of harassment she experienced.