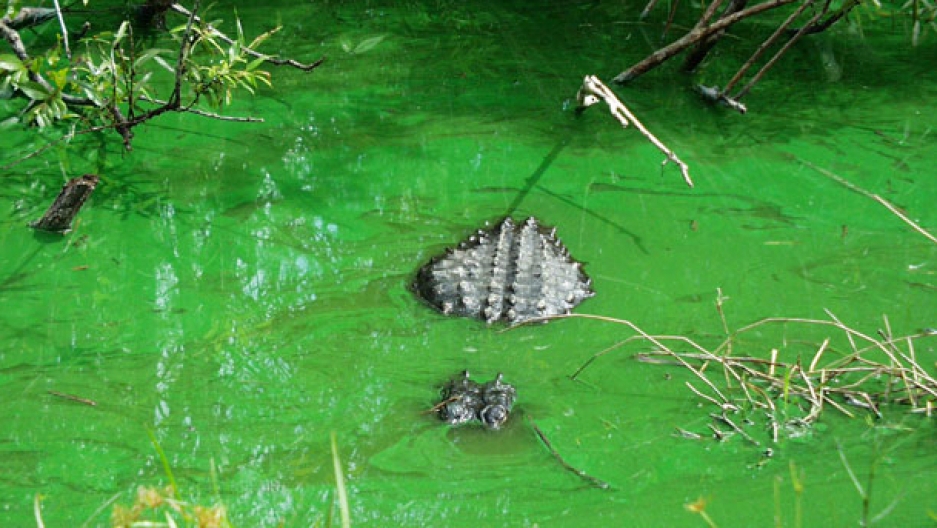 An alligator peeks above the so-called “green glop,” also known as an algae bloom that has overtaken many of Florida’s waterways and beaches.

An ecological disaster could be shaping Florida’s political races this November.

Large swaths of toxic, green algae blooms and so-called “red tide” blooms have infested shorelines, killing marine life, harming humans and stifling the tourism industry. Critics blame Governor Rick Scott, who is running for a US Senate seat, for not doing enough to control this ecological crisis, while Scott says his opponent, incumbent Democratic Senator Bill Nelson, is at fault.

Until recently, Scott held a narrow lead in most polls over Senator Nelson, but lately, Nelson has edged slightly ahead. It's possible that anger over the algae crisis could influence the election, according to Michael Grunwald, Politico senior reporter and author of the book, "The Swamp: The Everglades, Florida and the Politics of Paradise."

“This is a rough time for Governor Scott, or as he's now becoming known on social media, ‘Red Tide Rick,’” Grunwald says. “Generally, when you're a politician, you don't want to be a meme and you definitely don't want that meme to involve scum.”

Scott has been governor for eight years and this ecological meltdown is happening on his watch, Grunwald says. As a Tea Party Republican, part of his push for promoting Florida's economy has been to dismantle some environmental regulations, particularly for nutrients infecting Florida’s waterways.

Nutrients are not a positive thing in this context. High levels of nitrogen and phosphorus washing into the water from agricultural lands, leaky septic systems and fertilizer runoff are causing the massive algae blooms.

As governor, Scott signed a law repealing inspections of septic tanks that have been sending some of these nutrients into the waters — he specifically asked the federal government for relief from nutrient standards, Grunwald explains.

“He has really gutted some of the environmental agencies that were doing enforcement and regulation of the nutrients in the water,” he says. “There is a pretty plausible case that keeping nutrients out of the water has not been his top priority — and that nutrient pollution is creating these really serious environmental and economic problems.”

Florida is currently dealing with two different types of algae blooms. One is a kind of “neon-green guacamole glop that is toxic and has been linked to cancer and various testicular problems,” Grunwald explains. The other is a rust-colored ocean tide that is washing up on Florida’s shorelines along with millions of dead fish. This is bad for Florida in a number of significant ways.

“Florida's environment really is its economy,” Grunwald says. “The reason we have 20 million people living here and 100 million annual tourists visiting is because it's a really beautiful place. And when you can't breathe at the beach, when you can't go into the water, when the sparkling estuaries that are considered the most biodiverse in North America are covered with this blanket of foul-smelling green scum, that's not really popular.”

Scott is spending $20 million of his own money on campaign ads trying to blame Senator Nelson for the problem — an implausible argument, Grunwald says, since the state government is in charge of Florida’s water quality.

Grunwald thinks the issue may be hurting Scott, even in conservative areas along the coasts.

“People are really mad. People don't like slime in their backyard,” Grunwald says. “Now, do Republicans end up coming out and voting for Scott anyway, just because he's a Republican or because they like what he says about taxes or because they don't like Chuck Schumer? That's certainly possible. But every election and every statewide election in Florida is close. Governor Scott won both of his races by one point.

“So, this is a situation where if the slime flips a few voters or if it persuades a few voters to leave the Rick Scott space blank, that could really spell the difference between losing and winning,” he concludes.