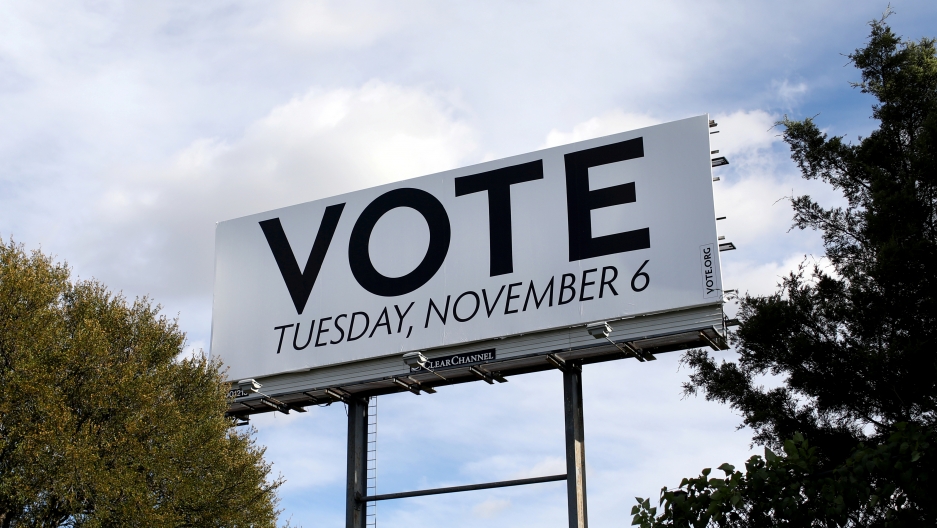 The midterms are right around the corner — just four day away. Here in the newsroom, we've been thinking a lot about what it's like for new US citizens voting for the first time in America.

Earlier this week, we made a callout to hear from new US citizens who are first-time voters.

Is this your first election as a US citizen? 🇺🇸 What does it mean to you? Email us: myworld@theworld.org pic.twitter.com/X9TDbYJ2Gf

We got some great responses. Listeners from across the country wrote in about their priorities, hopes and concerns in this midterm election.

Here's what some of you said:

“I became a US citizen today and I went straight to vote. I’ve been a permanent resident for 30 years and it was time for me to do my part. The importance of this election and the fact that I previously didn’t have a say in how elections went prompted me to do this. I was a citizen of Italy and Switzerland and voted in the past in both countries. Today I was able to do so in the country that gave me a life and career.”

“This is my second vote in America. I got to vote on Sunday for the Brazilian election and on Tuesday I voted early in the midterm election. Though it's compulsory to vote in Brazil, I still consider the right to vote as a right that must be exercised.”

"This is very first time I get to vote as an American citizen and I am proud to do so. After 20 years I finally can participate as a fully engaged citizen. In addition to me, an engaged citizen [...] in their daily life and routine is able to find micro moments and ways to resist and refuse the status quo and search for meaningful ways to contribute to the community for themselves and for others. Americans are known for their boldness, a refusal to give up, taking chances and finding creative ways to adapt and take initiative. I am honored to take this initiative to vote."

"To learn, when I came to the States, that voter turnout was among the lowest in all developed countries was insane to me. The electoral college system was also preposterous (though later explained, I could see the argument for it back in colonial times.) Even so, I didn't think I needed to participate, as America certainly has it figured out. But as 2016 has shown, America's democracy has proven to be antiquated and just as corrupt and gerrymandered. And since I have adopted it as my home, I needed to do my civic duty and make sure not only my voice is heard, but as many of us as possible. America needs to wake up and learn from the rest of the world. And I hope my vote will help."

"I decided to become a US citizen in 2017 because I did not want to be watching in the fringes anymore and wanted to be a responsible resident and vote. I am excited to cast my first ever vote in next week's midterm election — I never voted anywhere before."

"I am a 'dreamer.' After 33 years, I became a citizen this past September. This will be my first time voting, ever."

"I became a new citizen on Sept. 18 this year and I have just sent in my first ballot for the upcoming California elections. I was born and raised in the UK and moved to the US about 11 years ago. I have a line of American heritage on my paternal grandfather's side but did not qualify for citizenship at birth as I was not born here. I am very proud to be able to get involved in the democratic process."

I am a new US citizen. As a political science major and an immigration attorney who lived in the US for half of my life, voting (early voting) in US elections was one of the most rewarding days I can remember since I arrived to this country 18 years ago.

Participating in civic life is a privilege that many Americans take for granted, and often times don’t even exercise. This election must be a reminder that every right comes with a responsibility. We must educate ourselves, stay involved, and always, always defend this democracy and our constitution, no matter what political party is [in] power.

Proud to vote for the first time, and proud to be an American!

I am originally from Italy and it was great to hear the share from Marco Rosa, the Italian man living in Raleigh. I have been living in Salt Lake City for 28 years. I came on a student visa, completed my undergraduate and graduate degrees, then on a work visa, then green card to finally become citizen last January, 2018. President Trump has no idea on the long [... process] it takes to become [a] citizen. I decided to apply when Trump won the election.

I had a great feeling of joy and pride when I voted two weeks ago. As my countryman Marco Rosa, I also believe voting is a duty and a right. In the end, each one of us is responsible for our countries and have a say on the direction they take.

I became a US citizen in December of 2017. I wish it could have happened 13 months earlier, at least.

I live in one state, but commute to another for work during the middle of every week. This is why I requested an absentee ballot, which I awaited with great expectation. My US-born spouse was happy to see me study it carefully, but never really understood the level of my excitement and gratefulness about the right that I was given. I researched every name on that ballot, and every proposal on the back. I filled it out and packed it up with reverence, then made sure to put extra stamps on it. The whole process uplifted me for days.

I also regularly vote in the elections of my birth country [Serbia], by going to its consulate in NYC. The process of voting felt like the culmination of the long process it took to become a US citizen.

Friends of my kids KNEW that the day they turned 18, they had to fill out a voter registration form (which I mailed for them) or they wouldn't be allowed in my home!

Not one of those friends refused to register to vote.

I was born in Afghanistan, and the first time I ever voted, I was a refugee of Pakistan in the first ever presidential election in the history of Afghanistan. I always volunteered for local elections in Paskistan, but couldn't vote. It was like a dream to be able to vote.

As a common man, the most powerful thing we can do is vote, and support people who care about us. I’ll be voting this election for the first time as a US citizen.

I was born in Mexico City and I have lived most of my life in America. I am married and have four kids and two granddaughters.

My wife is Romanian and all of our kids speak two or three languages. So happy I made it here and blessed to have a lovely family. I have achieved the American dream.

As a country we have our ups and downs. I have always said this is the best country in the world. And we all know it in our family that have traveled outside USA.

So last June I pledged allegiance to this land called America in front of thousands of people like me and with tears in my eyes. I was so happy and proud. Now I am officially American and even got my passport!

I also promised to vote, especially this time around where things were not looking good. So last week, I casted my vote for the first time, it was an AWESOME feeling! [...]Presently I am working on my 16-year-old, getting him educated and informed on the importance of civic duties. He will be voting in 2020!! That will be AWESOME too and totally necessary.

By the way, if you're a new US citizen and are voting for the first time here in America, we want to hear from you too!

What's voting mean to you? And how does it compare with voting in another country?

Responses were lightly edited and condensed for clarity.