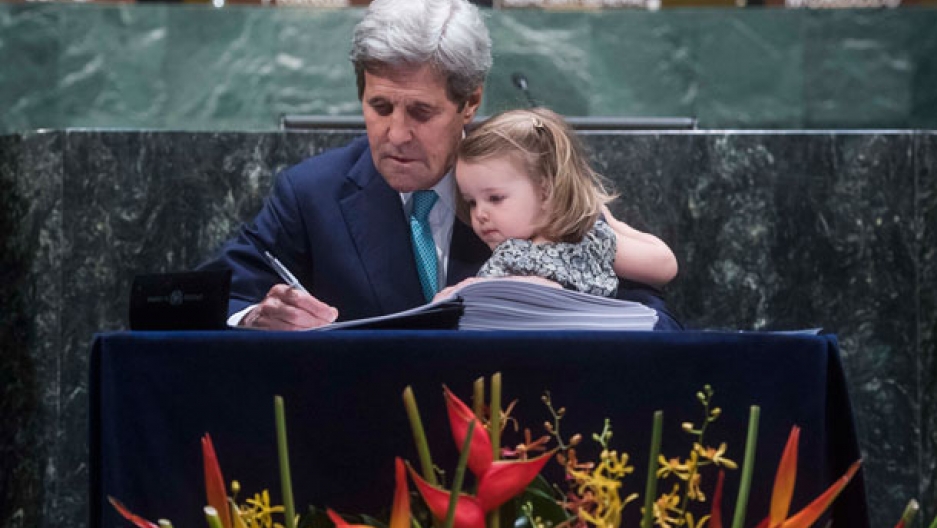 On Earth Day, April 22, 2016, then US Secretary of State John Kerry signed the Paris Climate Agreement as his granddaughter Isabelle looked on.

As secretary of state under President Barack Obama, Kerry made climate change one of his top priorities and later played a key role in the success of the Paris Climate Agreement in 2015. Now, as the Trump administration walks back climate policies and the world grapples with dire warnings from scientists, Kerry says human society and life itself are imperiled.

Still, Kerry prefers to remain optimistic and he sees many reasons to feel that way.

“First of all, living without optimism would be miserable. I don't want to be miserable,” he says.

"But, more importantly, I see what's happened in my lifetime. … [W]e’re doing amazing things on this planet. We're breaking new barriers every day, in terms of science, in terms of our understanding of things. We are living better. We have a higher standard of living, notwithstanding the poor and the homeless. The severe poverty rate when I was in college was 50 percent of this world. Today, it's less than 10 percent, for the first time in history. We brought 450 million people out of poverty in China, 400 million in India. Fifteen years ago, South Korea was an aid-recipient country. Today, it's a donor country.

“So, I see this transformation taking place,” he continues.

"We’re curing diseases we never thought we would ever cure — smallpox, tuberculosis, polio. We're doing an amazing job with cancer now. With the human genome project, we have the ability to give specialized cancer treatment. People are living longer and living better. So, the challenge remains, but the ability to meet the challenge is absolutely clear to all of us."

Nevertheless, he says, societies must organize themselves better. “We're not making our democracy ... work effectively and we've learned through history that the alternatives aren't pretty,” he cautions.

Kerry says because he was lucky enough to come back from the Vietnam War alive and whole, he felt he had an obligation to use every day to its maximum. “It was a gift,” he says. “Other guys didn't get that gift and I thought we owed it to them and their legacy, as well as to ourselves and our own value system, to live a life of purpose, to do something.”

He still feels that way. He still wants to work to achieve important goals, such as beating back the threat of climate change.

“I'm not willing to just throw up my hands and say, ‘Someone else is going to take care of this,’ because that's just not responsible,” Kerry says.

"We buy insurance to make sure that if our home burns down, we're going to be able to rebuild it. We buy car insurance to fix the wreck and life insurance [to make sure that] in the event somebody loses a life, the family is OK. Why aren't we buying insurance against the death and destruction that will come with increased storms and increased climate change?"

Environmental concerns are not new to Kerry. As lieutenant governor of Massachusetts, Kerry made his mark working on the problem of acid rain. This work taught him an important lesson, he says, that “... reasonable people with a reasonable purpose in public life are able to work together — Republican and Democrat — in order to do things that are good for American citizens.”

Together with Governor John Sununu of New Hampshire and Governor Richard Celeste of Ohio, Kerry put together an approach — a conservative approach, he notes, drawn up by the American Enterprise Institute — to use the economic market to solve an environmental and public health problem.

“There was a market incentive for [businesses] to buy and trade sulfur, which reduced the amount of sulfur,” Kerry explains. “We got acid rain under control through that system. Then, when I was in the Senate, I was able to use that [system] and put it into the Clean Air Act. So, it became part of the national program. You don't hear about acid rain now.

“We could do the same thing with climate change if we had leadership that was willing to recognize that the biggest market on this planet is the energy market,” Kerry continues.

"There are four to five billion users. That number will rise to about nine billion users in the next 30 years because that's going to be the population of the world. We have the ability, through the deployment of sustainable, renewable, alternative energy, to limit our emissions and to control climate change."

Kerry says he plans to stay involved and engaged with global issues. He is working with the Carnegie Endowment for International Peace in Washington on international conflict issues. As a fellow on global affairs at Yale University, he’s teaching courses on American power in the 21st century and the tools of diplomacy. And he continues to travel and talk about his new book, Every Day is Extra, which, unlike his previous books on policy, focuses on his personal journey:

"This book talks about my faith, my family, my divorce; it talks about growing up in a war and opposing the war; it talks about losing the presidency of the United States by one state and how you turn around and come back from that. I got a really nice note from a guy who had been running for office and he lost. He wrote me about how he had been reading my book, about how I processed that loss and what I decided to do, and he has found it really helpful. That I love. That really means something to me."