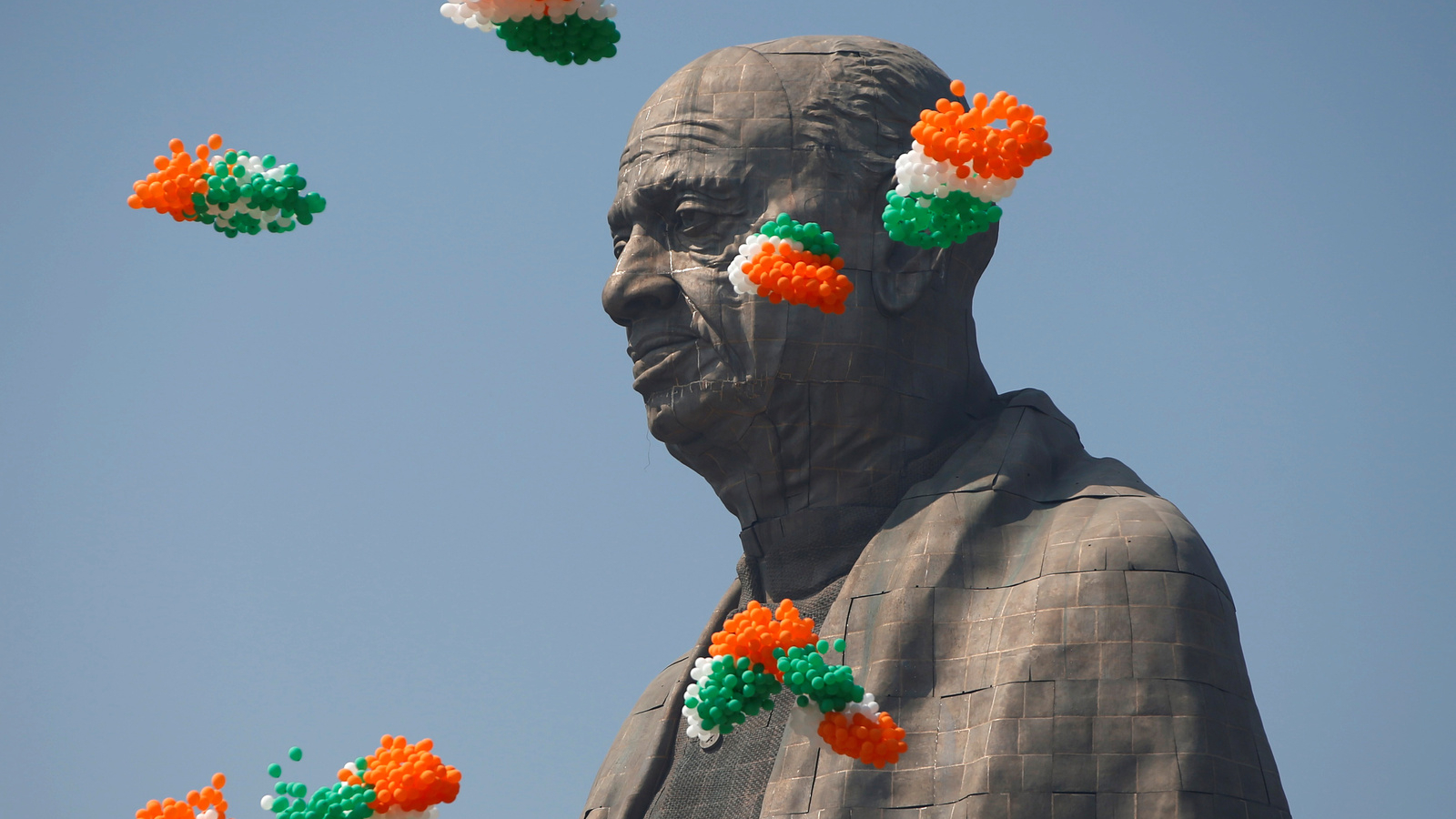 Indian tri-colored balloons fly around the "Statue of Unity" portraying Sardar Vallabhbhai Patel, one of the founding fathers of India, during its inauguration in Kevadia, in the western state of Gujarat, India, Oct. 31, 2018.

On Oct. 30, India’s Prime Minister Narendra Modi inaugurated the world’s largest statue, the "Statue of Unity" in Gujarat. At 182 meters or 598 feet tall (240 meters or 787 feet including the base), it is twice the height of the Statue of Liberty and depicts India’s first deputy prime minister, Sardar Vallabhbhai Patel.

The statue overlooks the Sardar Sarovar Dam on the Narmada River. Patel is often thought of as the inspiration for the dam, which came to international attention when the World Bank withdrew its support from the project in 1993 after a decade of environmental and humanitarian protests. It wasn’t until 2013 that the World Bank funded another large dam project.

Like the dam, the statue has been condemned for its lack of environmental oversight and its displacement of local Adivasi or Indigenous people. The land on which the statue was built is an Adivasi sacred site that was forcibly taken from them.

The "Statue of Unity" is part of a broader push by Modi’s Bharatiya Janata Party (BJP) to promote Patel as a symbol of Indian nationalism and free-market development. The statue’s website praises him for bringing the 'princely states' into the Union of India and for being an early advocate of Indian free enterprise.

The statue was supposed to be built with both private and public money, but it attracted little private investment. In the end, the government of Gujarat paid for much of the statue’s $416.67 million price tag.

The Gujarat government claims its investment in the statue will promote tourism, and that tourism is “sustainable development”. The United Nations says that sustainable tourism increases environmental outcomes and promotes local cultures. But given the statue’s lack of environmental checks and its displacement of local populations, it is hard to see how this project fulfills these goals.

The structure itself is not exactly a model of sustainable design. Some 5,000 tonnes of iron, 75,000 cubic meters of concrete, 5,700 tonnes of steel, and 22,500 tonnes of bronze sheets were used in its construction.

Critics of the statue note that this emblem of Indian nationalism was designed by a Chinese architect and the bronze sheeting was put in place by Chinese labor.

The statue’s position next to the controversial Sardar Sarovar Dam is also telling. While chief minister of Gujarat from 2001 to 2014, Modi pushed for the dam’s construction despite the World Bank’s condemnation. He praised the dam’s completion in 2017 as a monument to India’s progress.

Both the completion of the dam and the statue that celebrates it suggest that the BJP government is backing economic development over human rights and environmental protections.

The statue’s inauguration comes only a month after the country closed the first nature reserve in India since 1972. Modi’s government has also come under sustained criticism for a series of pro-industry policies that have eroded conservation, forest, coastal and air pollution protections, and weakened minority land rights.

India was recently ranked 177 out of 180 countries in the world for its environmental protection efforts.

Despite this record, the United Nations’ Environmental Program (UNEP) recently awarded Modi its highest environmental award. It made him a Champion of the Earth for his work on solar energy development and plastic reduction.

The decision prompted a backlash in India, where many commentators are concerned by the BJP’s environmental record.

Read more: Bridges and roads in north-east India may drive small tribes away from development

Visitors to the statue will access it via a 5-kilometer boat ride. At the statue’s base, they can buy souvenirs and fast food, before taking a high-speed elevator to the observation deck.

The observation deck will be situated in Patel’s head. From it, tourists will look out over the Sardar Sarovar Dam, as the accompanying commentary praises “united” India’s national development successes.

But let’s not forget the environmental and minority protections that have been sacrificed to achieve these goals.