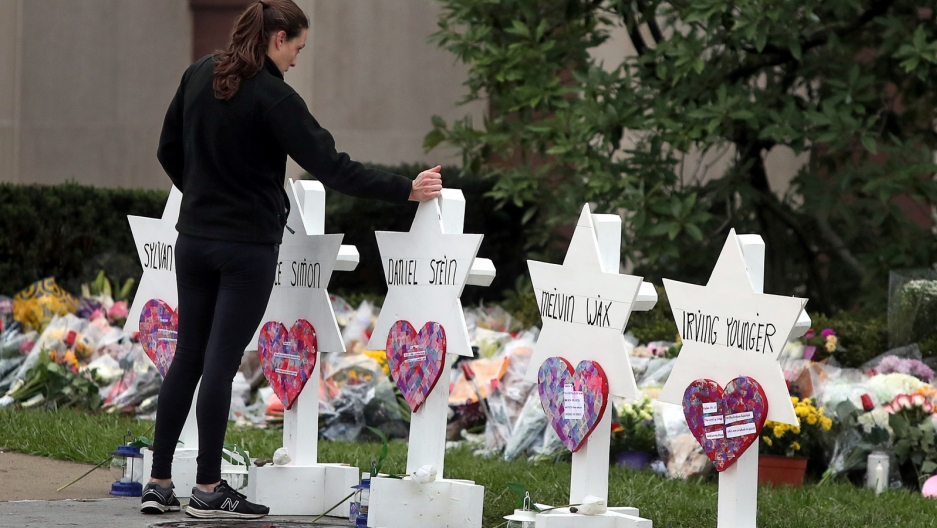 A woman reacts at a makeshift memorial outside the Tree of Life synagogue following Saturday's shooting at the synagogue in Pittsburgh, Pennsylvania, US, Oct. 29, 2018.

The shooting at the Tree of Life Congregation in Pittsburgh, Pennsylvania is believed to be the deadliest attack on Jews in American history. Eleven people were killed when the gunman burst in on the congregation’s morning worship service carrying an assault rifle and three handguns.

The suspect, Robert Bowers, is reported to be a frequent user of Gab, a social networking site that has become increasingly popular among white nationalists and other alt-right groups. He is alleged to have regularly reposted anti-Semitic slurs, expressed virulent anti-immigrant sentiments, called immigrants “invaders,” and claimed that Jews are “the enemy of white people.”

The magnitude of the Pittsburgh synagogue massacre may be unprecedented, but it is only the latest in the series of hate crimes against Jews. In February 2017, more than 100 gravestones were vandalized at a cemetery outside of St. Louis, Missouri, and at another Jewish cemetery in Philadelphia. Indeed, hate crimes have been on an increase against minority religions, people of color and immigrants. In the 10 days following the 2016 presidential election, nearly 900 hate-motivated incidents were reported, many on college campuses. Many of these incidents targeted Muslims, people of color and immigrants, along with Jews.

This outpouring of anti-immigrant and anti-Semitic sentiment is reminiscent in many ways of the political climate during the years between the first and second world wars in the US or the interwar period.

America as the ‘melting pot’

In its early years, the United States maintained an “open door policy” that drew millions of immigrants from all religions to enter the country, including Jews. Between 1820 and 1880, over 9 million immigrants entered America.

As a Jewish studies scholar, I am all too aware that by the early 1880s, American nativists — people who believed that the “genetic stock” of Northern Europe was superior to that of Southern and Eastern Europe — began pushing for the exclusion of “foreigners” whom they “viewed with deep suspicion.”

In fact, as scholar Barbara Bailin writes, most of the immigrants, who were from Southern, Central and Eastern Europe, “were considered so different in composition, religion, and culture from earlier immigrants as to trigger a xenophobic reaction that served to generate more restrictive immigration laws.”

In August 1882, Congress responded to increasing concerns about America’s “open door” policy and passed the Immigration Act of 1882, which included a provision denying entry to “any convict, lunatic, idiot or any person unable to take care of himself without becoming a public charge.”

However, enforcement was not strict, in part because immigration officers working at the points of entry were expected to implement these restrictions as they saw fit.

In fact, it was during the late 19th century that the American “melting pot” was born: Nearly 22 million immigrants from all over the world entered the US between 1881 and 1914.

They included approximately 1,500,000 million European Jews hoping to escape the longstanding legally enforced anti-Semitism of many parts of the European continent, which limited where Jews could live, what kinds of universities they could attend and what kinds of professions they could hold.

Fear of Jews and immigrants

Nativists continued to rail against the demographic shifts and in particular, took issue with the high numbers of Jews and Southern Italians entering the country.

These fears were eventually reflected in the makeup of Congress since the electorate voted increasing numbers of nativist congresspeople into office who vowed to change immigration laws with their constituent’s anti-immigrant sentiments in mind.

Nativist and isolationist sentiment in America only increased, as Europe fell headlong into World War I, “the war to end all wars.” On Feb. 4, 1917, Congress passed the Immigration Act of 1917, which reversed America’s open door policy and denied entry to the majority of immigrants seeking entry. As a result, between 1918 and 1921, only 20,019 Jews were admitted into the US.

The 1924 Immigration Act tightened the borders further. It transferred the decision to admit or deny immigrants from the immigration officers at the port of entry to the Foreign Services Office, which issued visas after the completion of a lengthy application with supporting documentation.

The quotas established by the act also set strict limits on the number of new immigrants allowed after 1924. The number of Central and Eastern Europeans allowed to enter the US was dramatically reduced.

The 1924 quotas provided visas to a mere 2 percent of each nationality already in the US by 1890. They excluded immigrants from Asia completely, except for immigrants from Japan and the Philippines. The stated fundamental purpose of this immigration act was to preserve the ideal of US “homogeneity.”

Congress did not revise the act until 1952.

Why does this history matter?

The political climate of the interwar period has many similarities with the anti-immigrant and anti-Semitic environment today.

President Trump’s platform is comprised in large part of strongly anti-immigrant rhetoric. A Pew Charitable Trust survey shows that as many as 66 percent of registered voters who supported Trump consider immigration a “very big problem,” while only 17 percent of Hillary Clinton’s supporters said the same. 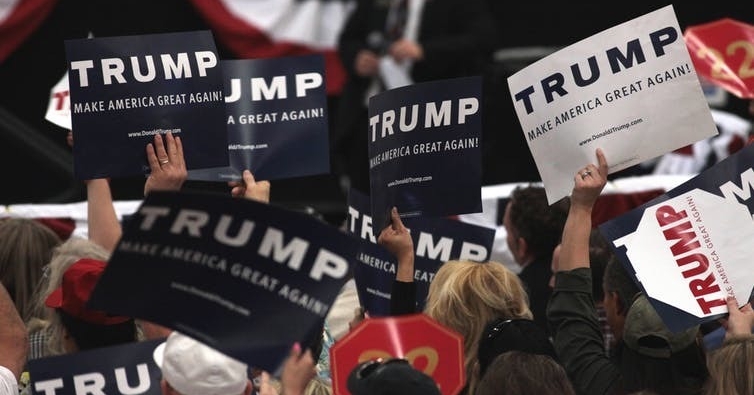 Supporters of President Donald Trump during a campaign rally.

President Donald Trump’s claims about the dangers posed by immigrants are not be supported by facts; but they do indicate increased isolationism, nativism and right-wing nationalism within the US. All over again, we see anti-immigrant sentiment and anti-Semitism, going hand in hand.

Ingrid Anderson is an associate director of Jewish studies and lecturer in the Arts & Sciences Writing Program at Boston University.