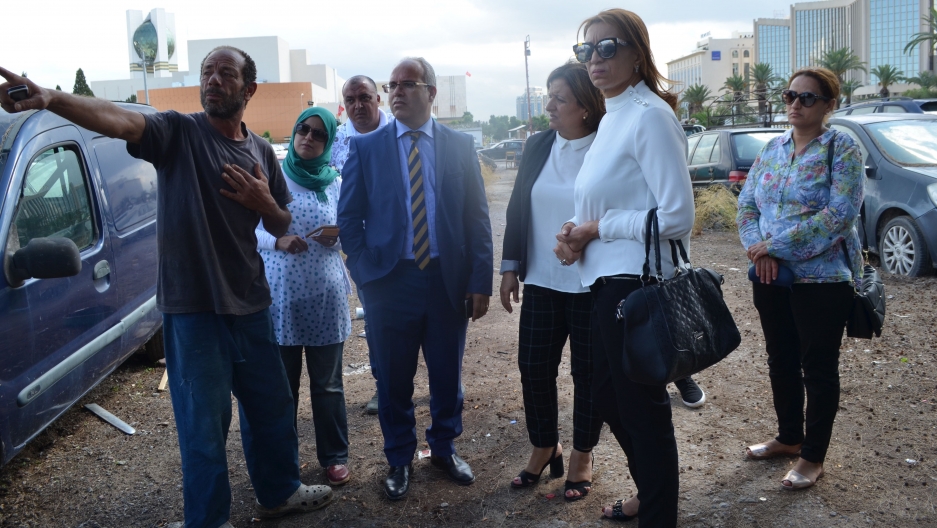 Tunis Mayor Souad Abderrahim makes a stop on a tour of the city.

Souad Abderrahim stepped out from behind the tinted windows of her black car and into a decrepit apartment building on Rue Tronja in central Tunis. The newly elected mayor of Tunisia's capital city was on hand this late-August afternoon to show that she is one with her city’s people.

The crumbling apartment building was slated for demolition, but some inhabitants refused to leave for fear of homelessness. It was the first stop on a city tour, a chance to visit small businesses and meet local residents looking to air their grievances. The tour was a goodwill gesture and something that she has regularly engaged in since becoming mayor in July.

Abderrahim, a career pharmacist, and previously a student union activist, re-entered political life in 2011 as an elected member of the postrevolutionary national assembly in charge of designing a new constitution. In parliament, she headed the committee on human rights and freedoms. Now, she has the more hands-on task of implementing the nascent constitution at the municipal level.

“I'm in an executive role now, so, I must focus on executing well-defined projects for the good of our city and its inhabitants,” Abderrahim said in soft-spoken French.

Restoring the face of the city is a top priority, she says. For starters, she wants to improve street cleaning and plant more trees. A renewed look could help boost tourism, a vital industry that was decimated across the country after three terror attacks in 2015 together killed more than 70 people.

“We must find a worthwhile project that heightens our level of freedom but at the same time can unite Tunisians,” said Abderrahim, whose conservative-chic look turned heads on this neglected street.

Abderrahim is herself a somewhat divisive figure. She's the first woman mayor of Tunis, and the first woman elected as mayor of an Arab capital (Iraq’s Zekra Alwach was appointed mayor of Baghdad in 2015). Abderrahim dedicated her victory in City Hall to all Tunisian women. But in 2011, she angered progressives by denouncing single mothers as a “disgrace” to the country who do not deserve the same rights and protections as other citizens. And although Abderrahim is a self-described liberal and doesn't wear hijab, she chose to head the traditionally Islamist Ennahdha's party list. (She technically ran as an independent, but her affiliation with Ennahdha dates back to her university days.)

In many ways, Abderrahim embodies the tension and contradictions within modern Tunisian society. The North African nation, widely seen as the best success story of the Arab Spring, is among the most liberal in the region, but it has an increasingly vocal Islamist faction who have played an important role in shaping the country’s postrevolutionary identity.

“It is true that our constitution is civil, but it is also true that article 1 of the constitution states that Tunisia is an Islamic country, so we have to find the balance for us,” Abderrahim said when pressed on how to bridge the political divide on social issues. “The main thing is to find a social consensus.”

Several days before the tour with Abderrahim, a presidential proposal to give women equal inheritance rights sparked a weekend of demonstrations in the city’s center. Thousands of people took to the streets to rally in support of the bill on Tunisia’s national women’s day, following a mass protest against the proposal by conservative Muslims two days earlier.

President Beji Caid Essebsi, who made the proposal to parliament, has since weakened its wording to make exceptions for those wishing to continue following Islamic law, disappointing women’s rights advocates. The Ennahdha party has nonetheless vowed to reject the proposal because it contradicts Islamic law. Abderrahim, however, remained neutral on the issue, supporting the president’s version of the bill.

Ahlem Belhadj, a campaigner from the Tunisian Association of Democratic Women, said that does not go far enough to ensure equality.

“The law has to be precise,” she said.

‘Fit to be in every institution’

Mariem Masmoudi, a Tunis-based officer at the International Institute for Democracy and Electoral Assistance who works on constitution building, said Abderrahim was “a true consensus-seeker” who represents a diverse set of people across varying constituencies. “As such, she eases tensions and assures voters that a different kind of politics is possible,” she said.

“From what I've seen of Ms. Abderrahim in her time as a member of the National Constituent Assembly, she is a measured, reasonable politician who truly believes in public office as public service. She is not an ideologue, [which is] a personal characteristic so desperately needed in a national political climate too often gripped with harsh partisanship and deep divisions.”

Meherzia Labidi Maïza, the head of Tunisia’s parliamentary committee on women and family and a member of the Ennahdha party's executive bureau, said she was confident in Abderrahim but that it was too soon to judge her track record as mayor.

“She is really focusing on how to find and how to implement the values of the constitution at the local level,” she said, adding that, on certain issues, “We have a slightly different opinion, but no problem — we are in a democracy.”

Tunis residents, meanwhile, have mixed feelings about their “sheikh.”

Aphek, 27, who, along with several others didn't want her last name used, said she is against Abderrahim “on principle” because of her previous comments on single mothers. Aphek and her boyfriend, Youssef, feel that the mayor is not a real feminist. “She cannot be a feminist while she belongs to Ennahdha,” Youssef said in Arabic through an interpreter.

Daleela, a middle-aged resident who shopped in the old city with her daughter-in-law, said in Arabic, “She is bringing honor to all the Tunisian women. I didn't study; I didn't do anything in my life, so I like to see a woman [...] bring women outside of the control of the man.”

On that front, Abderrahim says she plans to begin empowering women within local institutions.

“We have been able to put women in charge of [municipal commissions],” she said. “We have named women as presidents of districts within Tunis.” (Women made up nearly half of local council positions following the election this summer, a historic leap, according to the UN.) “We must empower women through actions — for example, by making job offers or calls for candidature.”

She said Tunisia, which has strong laws regarding violence against women and recently granted Muslim women the right to marry non-Muslim men, can continue to be a leader in the region on social issues “by raising the threshold and ceilings of freedoms.”

“The Tunisian woman, actually, she is in a very good position,” she said. “She must draw attention to herself to assert herself in any role. She should not passively accept the situation; she is fit to be in every institution.”

Abderrahim keeps her cards close to her chest, but one gets the impression she aspires to bigger things.

Indeed, when not touring the city’s truck stops and used car lots, she is developing relationships with foreign dignitaries. In September, she hosted a bipartisan delegation of five US Congress members. She has also met with ambassadors and ministers from France, Italy and the UK to discuss immigration, security and multilateral and bilateral cooperation, according to her staff. Next, she plans to go to Canada for an official visit with Montreal’s mayor, Valérie Plante.

Abderrahim’s colleagues say a future presidential bid is not out of the question.

“More than mayor? Of course, of course!” said Leila Oueslati, a member of the federal commission on culture and education and the rapporteur of the anti-corruption commission, who worked with Abderrahim in the first Constituent Assembly. “There are mayors of large municipalities who have become presidents of their country, so why not?” she said in French.

When pressed on the matter, Abderrahim did not deny that she might consider a future presidential run. Rather, she said, “We cannot talk right now, in my first few months [as mayor], about a presidential strategy. The key is for me to succeed in my current role.”