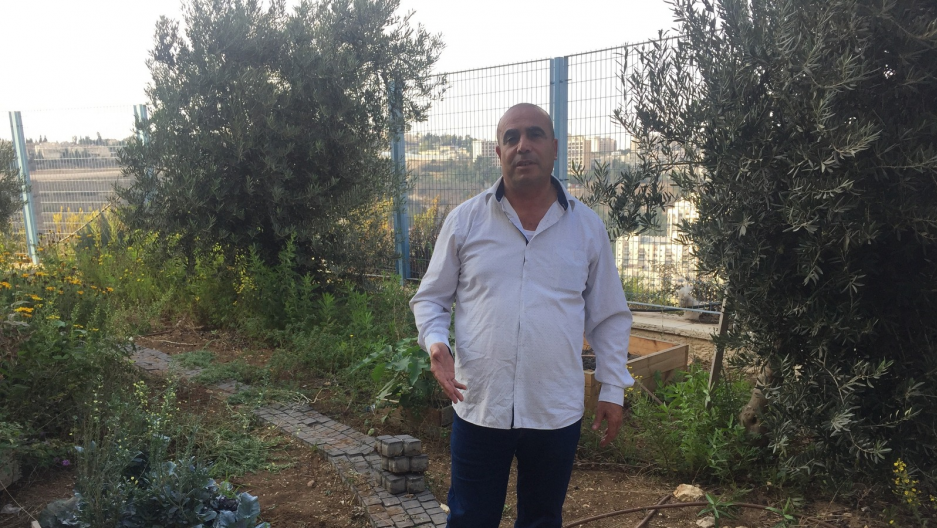 Ramadan Dabash is running for the Jersulam city council. If elected, he would be the first Palestinian voted onto the council.

Ramadan Dabash opens the door onto a paved terrace in east Jerusalem, in the Palestinian neighborhood where he grew up — Sur Baher. And he compares his part of town to the Jewish neighborhood right in front of us, Armon Hanatziv.

“They have parking, they have a swimming pool, they have roads, [safe] roads,” He says. “They have everything. But here in Sur Baher … we don’t have nothing.”

Palestinians make up more than a third of Jerusalem’s population, but they receive far less than their share of city funds and have higher rates of unemployment and poverty than their Jewish neighbors. Dabash says he’s running for city council to try to change that.

Dabash shows me a vegetable garden that’s part of a gleaming new community center he helped get built when he was the head of the Sur Baher neighborhood council.

Related: The story behind why Paraguay followed the US and moved its embassy to Jerusalem

Now, he says its time to work from the inside to get these kinds of resources for other Palestinian neighborhoods in the city. He’s created a local party of Palestinian candidates, called Al-Quds Baladi, or Jerusalem Is My City, and he hopes to capture some of the 31 seats on the city council.

“We are paying tax, we are paying Arnona [property tax], we pay everything for the municipality of Jerusalem,” Dabash says. “So, what’s the problem if we are inside?"

A short drive through Sur Baher shows the challenges of the neighborhood — and the opportunity Dabash sees for change. A green dumpster is open and gaping. Trucks and buses jostle for space alongside motorcycles and pedestrians on narrow roads with chipped sidewalks.

But Dabash’s campaign is controversial.

When Israel annexed east Jerusalem in 1967 — a move opposed by most of the world — most Palestinians in the city did not become Israeli citizens, but rather, legal residents of Jerusalem. They receive social services and pay taxes, and they can vote in municipal elections, but the majority choose not to. Community activist says voting in Israeli elections would mean agreeing to Israeli rule.

Related: She wanted to study at Hebrew University, but Israel is blocking her

“East Jerusalem is an occupied territory,” Hammoury says. “All the Palestinians, they want to finish the occupation, for that [reason] they will not share the municipal elections.”

Dabash says he’s gotten death threats. And he believes Palestinian opponents tried to kidnap his 3-year-old son. So he’s taking a quiet approach to the campaign. He has no election posters because he’s afraid other Palestinians will tear them down. Instead, he speaks in private homes, in mosques and on social media.

He is adept at navigating difficult situations. He has four wives, as Islam permits, and he used a legal workaround to escape an Israeli ban on the practice by listing three as girlfriends. In the Jerusalem race, he hired a religious Israeli campaign advisor – Gilad Israeli — to open doors in city hall.

“No Arab can help me exactly in the Israeli side,” Dabash says. “He knows everybody inside.”

Meir Margalit served two terms on the Jerusalem city council with the left-wing Meretz party. He was doubtful of Dabash's ability to get concessions from the city.

"We were three members in a council of 31," he said. "We couldn't change policies ... in a right-wing council, so our main task was to try to minimize damages, in particular in east Jerusalem."

Speaking to people outside the community center, The World cannot find anyone who says for sure they’ll cast a ballot.

In a Sur Baher pharmacy, a housewife named Sara Dwayat says the city should get rid of the “families of mice” that feed off raw sewage. Naim Salman, a bus driver with Israeli public transportation, stands next to her in line and says the problem isn’t the sewage and mice, it’s the astronomical cost of building permits. But would he vote for Dabash?

"I will not vote and I don't trust anybody," Salman says. “Whoever is accepted by them [the Israelis] is like them.”

"These days you cannot believe anyone," she adds.

Another Palestinian, Aziz Abu Sara, announced a run for Jerusalem mayor earlier this year. At the time, he told The World, “We cannot only complain about what’s wrong here. We cannot sit idle. We have to do something.”

Abu Sara ultimately dropped out of the race. To run for mayor, he needed to challenge an Israeli law that required him to have Israeli citizenship. Then, he says Israeli authorities began questioning his right to maintain his legal residency status in Jerusalem. And he says Palestinians opposed to his run threatened his brother’s life.

“If he’s able to win, he will break the taboo. If he was able to win, next election you’ll see three, four, five different Palestinian lists running and a huge amount of Palestinians voting.”

To take that first step and get onto the city council, Dabash needs about 7,000 votes.