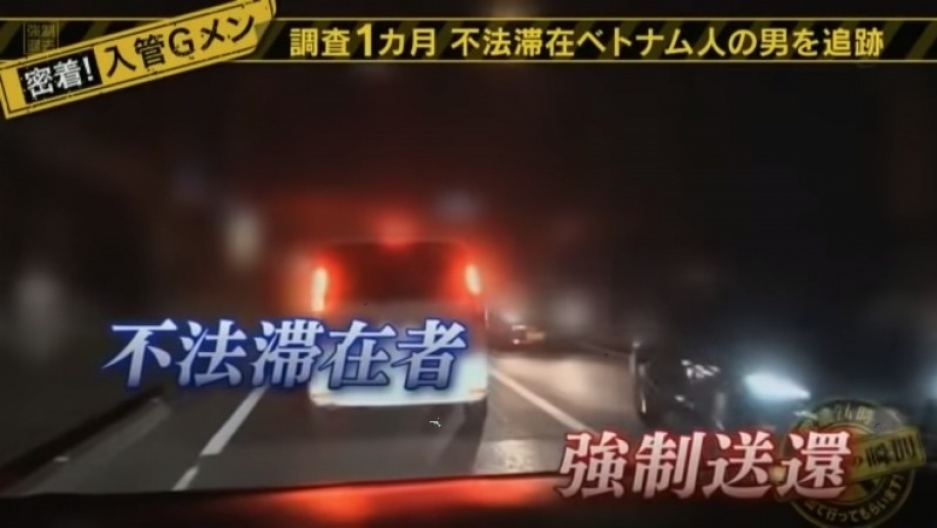 Screenshot from the TV show “Caught: At the Very Moment They Were Deported” (タイキョの瞬間) on YouTube. Top: “Full Coverage: Immigration Bureau G-Men: Tracking down a Vietnamese illegal alien over the course of one month” Bottom: “ILLEGAL OVERSTAYER” and “FORCED DEPORTATION."

Editor’s note: This story includes an interview on PRI's The World with Nevin Thompson, the author of the story below.

As Japan predicts a rise in the number of immigrants and foreign tourists in the coming years, a new television show has turned migrant deportations into entertainment. The program provoked some outraged viewer reactions and insights about the plight faced by visa overstayers and undocumented migrants in Japan.

Taikyo no Shunkan (タイキョの瞬間) (English translation: “Caught: At the Very Moment They Were Deported”) premiered on Fuji Television in a Saturday evening prime time slot on October 6, 2018.

Using a typical reality show format, the two-hour program follows a group of so-called “G-Men”, or immigration officers, employed by the Tokyo regional office of the National Immigration Bureau as they hunt down visa overstayers and so-called “illegal aliens” (fuhotaizaisha, 不法滞在者) and squatters (fuhosenshu, 不法占有) on camera.

In one segment, the immigration officers stake out the apartment of a Vietnamese man suspected of violating the conditions of his trainee visa. He and two others are arrested and interrogated on camera before being deported 24 hours later.

In another segment, the immigration officers storm a factory and detain a group of Indians suspected of being undocumented workers — the owners of the factory never appear on camera.

A final segment investigates the problem of Chinese “squatters” who have set up a vegetable patch on public land on an isolated stretch of riverbank in Kyoto.

For now, a fan upload of the video of the entire program can be viewed on DailyMotion.

The content and tone of Taikyo no Shunkan was widely criticized, with Japanese anti-racism group Counter-Racist Action Collective (C.R.A.C.) noting that Japan's  Immigration Bureau, which employs the featured “G-Men”, actively promoted the program:

This program is officially backed up by Tokyo Immigration Bureau, which makes the least refugee approvals in the world and daily abuses immigrants and refugee applicants, sometimes to death. https://t.co/HLuMOZf72e

An announcement from the Tokyo Regional Immigration Bureau: Tokyo Keizai Shimbun has published an overview of the Taikyo no Shunkanprogram on Saturday night [that features the immigration bureau.] Please be sure to read this before you watch the program!!! Read the Tokyo Keizai story here: https://t.co/3fDFDaQKhV

The television program appears as Japan plans to beef up its immigration services — the government seeks to recruit at least 500,000 foreign workers to help deal with a perceived labor shortage (Japanese women still participate less in the labor market, leading to worker shortages).

Many of the potential 500,000 foreign workers are expected to work as temporary labor with low wages and precarious employment, providing plenty of incentives for workers to seek better-paying but undocumented work once they arrive.

A Buzzfeed Japan article by Kota Hatachi about Taikyo No Shunkan collected online comments about the program and insights about the life of foreign workers in Japan. One noted that while the undocumented workers were presented as a threat to Japan, in reality, it's the workers themselves who are stalked, interrogated and subsequently deported, clearly facing the most risk.

Hatachi points out that at least 13 people have died in immigration detention in Japan since 2009, a statistic that was never acknowledged by the Taikyo No Shunkan program.

Mogi Kenichiro, a media personality and neuroscientist, also criticized the vapidity of a television program that treated immigration raids as entertainment on Twitter:

With no deep insights, without even a shred of critical analysis and the stupidity of superficial entertainment, Fuji TV's Taikyo no Shunkan is the worst television program on Japanese television today. It's an international embarrassment.

Following the program's broadcast, Japanese activists mobilized to let apprehended undocumented workers incarcerated in a regional detention center and others know that they are not alone:

We have mailed these photographs of people protesting Fuji Television's Taikyo no Shukan in Shibuya (in Tokyo) to deportees at Ushiku (Higashi Nihon Immigration Center). We'll go and visit them this week. #FreeUshiku #TelevisedHouseHoldSearches

Television programs that exploit immigration enforcement as entertainment with the support and help of government border security agencies are not limited to Japan.

Media in the United Kingdom and Australia have long broadcast programs in which travelers and undocumented migrants are ambushed, interrogated, detained and sometimes deported on camera.

A similar Canadian program, produced with the direct cooperation of the Canada Border Services Agency (CBSA), was canceled in 2016 due to personal privacy violations. The program is still broadcast in reruns.

Nevin Thompson is the Japan editor with Global Voices.