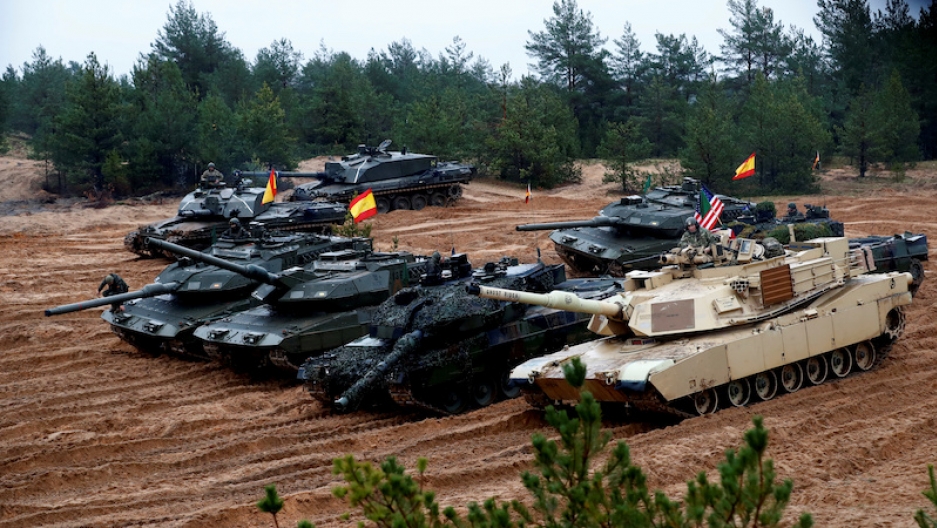 US, German, Spanish and Polish troops of the NATO enhanced Forward Presence battle groups with their tanks get ready for exercises in Adazi, Latvia.

As temperatures fell below freezing across training grounds in central Norway, giving a taste of what it means to defend NATO's vast northern flank, some 50,000 troops, 250 aircraft and 10,000 tanks, trucks and other land-based vehicles were ready.

"Forces are in position, they are integrating and starting combat enhancement training for major battlefield operations over the next two weeks," Colonel Eystein Kvarving at Norway's Joint Headquarters told Reuters.

Dubbed Trident Juncture, the exercise is by far the biggest in Norway since the early 1980s, a sign that the alliance wants to sharpen its defenses after years of cost cuts and far-flung combat missions.

Increasingly concerned about Russia since it annexed Crimea in 2014, Norway has sought to double the number of US Marines receiving training on its soil every year, a move criticized by Moscow.

Russia last month held its biggest maneuvers since 1981, called Vostok-2018 (East-2018), mobilizing 300,000 troops in a show of force close to China's border which included joint drills with the Chinese and Mongolian armies.

NATO's war games were originally meant to involve 35,000 troops, but the number grew in recent months and included the late addition of an aircraft carrier, the USS Harry S. Truman with some 6,000 personnel.

NATO fears Russia's military build-up in the region could ultimately restrict naval forces' ability to navigate freely, and on Oct. 19 the Truman became the first American aircraft carrier to enter the Arctic Circle since before the fall of the Soviet Union in 1991.

Although a solid majority of Norwegians support membership of NATO, whose secretary general is former Norwegian prime minister Jens Stoltenberg, some parties on the left would prefer that the country quit the alliance and form some type of military cooperation arrangement with its Nordic neighbors.

"The effect of this activity will increase the tension between Norway and Russia," Socialist member of parliament Torgeir Knag Fylkesnes said of the exercise, adding that the presence of an aircraft carrier caused particular concern.

"You have to be quite hawkish to view this as something that brings peace in any way," he told Reuters.