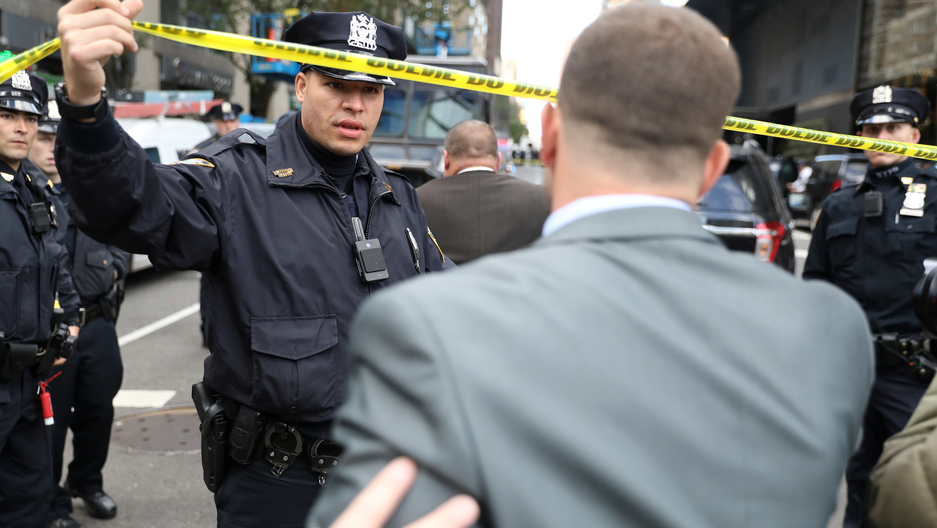 Police allow someone through the perimeter outside the Time Warner Center in New York City after a suspicious package was found inside the CNN headquarters in New York, Oct. 24, 2018.

Police intercepted suspected bombs mailed to former US President Barack Obama, former presidential candidate Hillary Clinton, and other high-profile Democrats, in what New York officials described on Wednesday as an act of terrorism.

With the country deeply polarized, the packages brought a new level of tension to Nov. 6 political contests that will decide whether Democrats can challenge the majorities now held by Trump's Republicans in Congress.

The CNN bureau in New York also received a device looking like a pipe bomb, leading police to evacuate the building, and New York Governor Andrew Cuomo, a Democrat, said his office also received a suspicious package. CNN reported that Eric Holder, who was US attorney general under Obama and Democratic representative Maxine Waters were also among those targeted.

"This clearly is an act of terror attempting to undermine our free press and leaders of this country through acts of violence," New York Mayor Bill de Blasio told a news conference.

US President Donald Trump condemned what he called "despicable acts" and vowed to bring those responsible to justice.

"In these times, we have to unify, we have to come together, and send one very clear, strong, unmistakable message that acts or threats of political violence of any kind have no place in the United States of America," Trump said at the White House.

"We're extremely angry, upset and unhappy about what we witnessed this morning, and we will get to the bottom of it," Trump said.

A similar pipe bomb was delivered earlier this week to the home of George Soros, a major Democratic Party donor.

There has been no claim of responsibility.

All of the targets are frequently disparaged by right-wing critics and Trump, whose spokeswoman condemned the acts.

"Our condemnation of these despicable acts certainly includes threats made to CNN as well as current or former public servants. These cowardly acts are unacceptable and won't be tolerated," Press Secretary Sarah Huckabee Sanders said on Twitter.

Alexander Soros, the son of George Soros, said in an opinion piece published by The New York Times that his father had long faced verbal criticism and threats over his involvement in politics, "but something changed in 2016" when Trump was elected.

"Before that, the vitriol he faced was largely confined to the extremist fringes, among white supremacists and nationalists who sought to undermine the very foundations of democracy. But with Donald Trump's presidential campaign, things got worse," Alexander Soros wrote.

He placed direct responsibility with those who sent the devices, but added: "I cannot see it divorced from the new normal of political demonization that plagues us today."

The package to Clinton was found late on Tuesday while the one addressed to Obama was recovered early on Wednesday, both during routine off-site mail screenings, the Secret Service said. Obama and Clinton were not at risk, they said.

Police intercepted what appeared to be a live explosive device and an envelope containing white powder at the Time Warner Center, where the CNN newsroom in New York is based, Police Commissioner James O'Neill told the news conference. Experts were analyzing whether the powder was a dangerous substance, he said.

In the weeks following the attacks of Sept. 11, 2001, anthrax spores were mailed to news media offices and two US senators, killing five people and infecting 17 others.

CNN is a frequent target of Trump, who routinely calls the news media the "enemy of the people" and belittles critical coverage as "fake news."

Officials said the package received by CNN was addressed to former CIA director John Brennan, a periodic guest commentator on the cable network.

Brennan has been an outspoken critic of Trump, calling the president's performance during a July joint news conference with Russian President Vladimir Putin in Helsinki "nothing short of treasonous."

Media reported that other mailed devices had also been intercepted, apparently with the return address of US Representative Debbie Wasserman Schultz, a former Democratic Party national chairwoman.

Waters said in a statement that her Washington office was the target of "a suspicious package." The package was intercepted at a Maryland mail processing facility, NBC reported.

A source familiar with the matter earlier said a suspicious package addressed to the White House had also been intercepted, but soon after said that information was wrong.

Editor's Note: The story has been updated to include new details emerging on several suspicious packages sent to top Democratic leaders and CNN, including a statement by US President Donald Trump Wednesday afternoon.