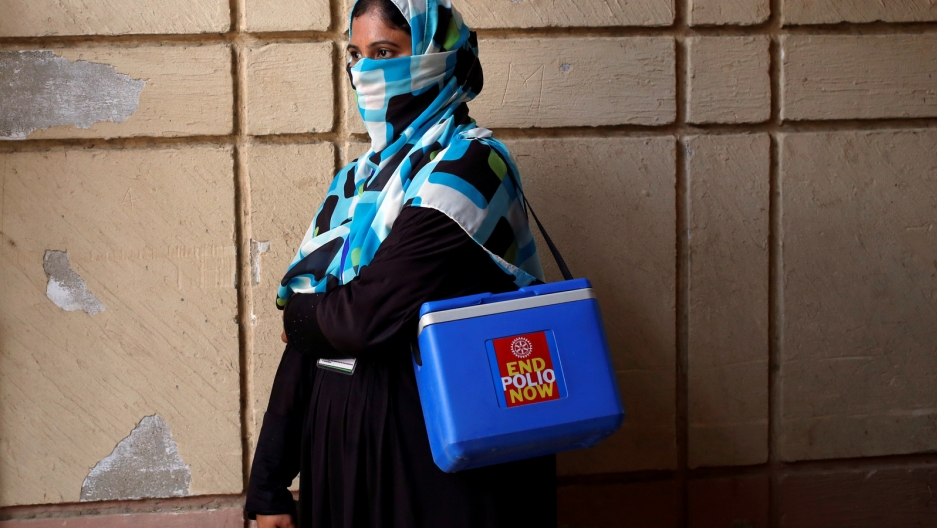 A vaccinator with a kit box waits for her colleagues to do an anti-polio campaign in a low-income neighborhood in Karachi, Pakistan, April 9, 2018.

The world is at the brink of eradicating polio. Only three countries now have ongoing transmission: Nigeria, Afghanistan and Pakistan. And in 2017, there were only a couple dozen cases of paralytic wild polio reported worldwide – a massive decrease from the estimated 350,000 cases reported across 125 countries in 1988. Development of the polio vaccine and global vaccination efforts are at the heart of this monumental public health achievement.

Epidemiologists typically detect polio transmission based on reported cases of acute flaccid paralysis (AFP). The World Health Organization certifies a country as polio-free if there are no reports of AFP for three years. But AFP is a severe outcome that occurs in a very small fraction of polio infections. It’s just the tip of the iceberg — one case of AFP indicates substantial underlying polio transmission in a population.

This is why now, as the world approaches the final stages of polio eradication, environmental surveillance becomes key. Looking for poliovirus in sewage is more sensitive than counting up cases of AFP. It can detect virus shed in the feces of non-paralyzed people infected with polio – what epidemiologists call the silent circulation of polio.

Environmental microbiologists have studied pathogens in sewage for decades, but its use as a public health surveillance tool is relatively new. As epidemiologists who specialize in modeling the spread of disease, we wondered if we could estimate the intensity of infection in a population by analyzing counts of virus in its sewage. The discovery of polio transmission in Israel in 2013 — the first in that country since 1988 — provided a way for us to test whether our model, coupled with environmental surveillance data from different parts of the world, could be used to assess how much silent transmission is still happening globally.

Characterizing a polio outbreak in Israel

Given all the progress made toward polio eradication, it was disturbing to realize polio was actively being transmitted in Israel in 2013. A sewage surveillance system — set up in 1989 by the Israeli health department to detect poliovirus — sounded the alarm. The Ministry of Health worked quickly to vaccinate the public, and fortunately none of the infections resulted in paralysis.

To track polio in human waste in Israel, samples are automatically collected from sewage trunk lines and treatment plants approximately weekly. Back at the country’s Central Virology Laboratory, they’re checked for poliovirus.

Most of the positive sewage samples during the 2013 outbreak came from the Negev region of Israel, and most of those from predominantly Bedouin communities. Based on molecular characteristics of the virus isolated from the sewage, scientists know that the virus originated in Pakistan, then traveled into the region, diverging into Egypt, Israel and Syria. For a virus, even tightly guarded geopolitical borders are fluid.

To understand what kept the polio transmission going, we needed to better characterize Bedouin movement patterns. Where people travel provides pathways for them to potentially spread the virus. For example, larger Jewish communities such as Beer Sheva are economic hubs; Bedouins from communities throughout the region travel there daily. In addition, many communities send children to regional schools, another potential hub of transmission.

Poor sanitary conditions provide an important route for the poliovirus to move from host to host — remember, infected people excrete viable virus in their feces. Epidemiologists knew surprisingly little about the water and sanitation infrastructure of these Bedouin communities, beyond that they were highly variable and often poor compared to nearby Jewish communities.

Creating a model for how polio spreads

The Central Virology Laboratory and Ministry of Health recognized the potential in their data, but no one had developed a theory to convert environmental surveillance into public health metrics. Because of our experience in modeling environmentally transmitted infectious diseases, we met with Central Virology Laboratory and Ministry of Health officials on the ground during the later stages of the epidemic and began collaborating on a new approach to the problem.

A mathematical model allows epidemiologists to use what we know about a situation’s underlying biological mechanisms to better interpret or extract more information from data. We knew a number of things in this case: the relative levels of poliovirus in various communities’ sewage over time, the coverage of the vaccination campaigns, and the differences in transmission between the wild virus and the attenuated vaccine virus. Our goal was to come up with a model that would explain how the disease was transmitted through the population in Israel that would match the observed changes in sewage polio levels over time.

Using new analytical methods, we estimated that in Rahat, the largest predominantly Bedouin community that sustained significant transmission, 56 percent of the at-risk population — primarily children under 10 — was infected.

Positive polio samples from the environment only alert public health officials that transmission is happening. Our model provides additional information about how many people were infected. Without a model, researchers would have no way of estimating the extent of the outbreak — the poliovirus in the sewage could have been collected from many people shedding a little or a few people shedding a lot. But because outbreaks follow recognizable patterns, the dynamic changes in polio concentration can actually tell us a lot about how the disease is moving through the population.

There is always uncertainty in model predictions, so corroboration with multiple data sources is important. In this outbreak, we were able to compare to crude estimates of infection based on community stool samples.

As we approach the final stages of polio eradication, environmental measures will become the only feasible way to detect polio transmission. And this silent spread of the virus must be halted to fully eradicate the disease. Waiting until there’s a paralytic case means there’s a lot of polio around and containing it with vaccination efforts becomes more difficult.

Beyond polio, environmental surveillance can and should be extended to other infectious diseases shed into sewage — enteroviruses, typhoid and cholera are prime candidates. Epidemiologists can then use modeling approaches to translate surveillance data to describe population patterns, allowing public health officials to respond rapidly to outbreaks.