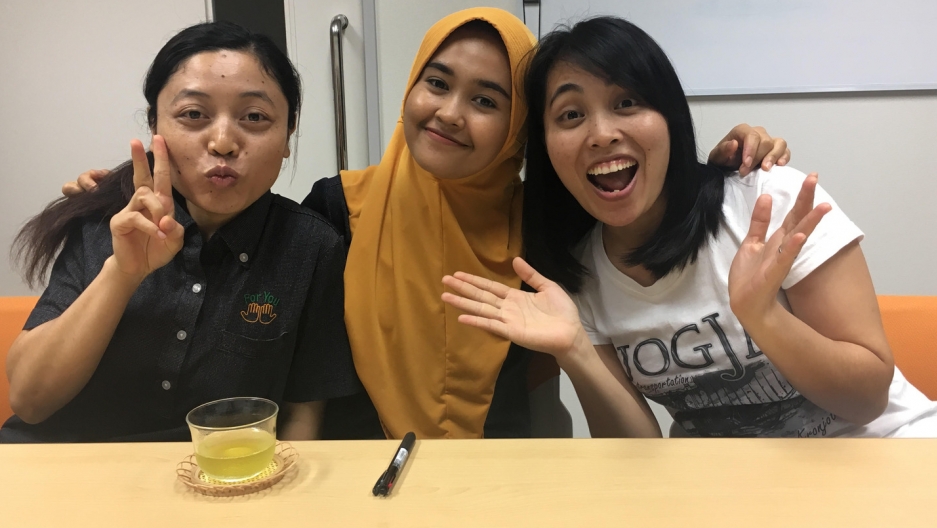 Walk through the sliding glass doors of the Shirokane no Mori nursing home in Tokyo and you’ll find a cabinet with individual cubbies where visitors can leave their shoes and borrow a pair of slippers.

It feels homey for the seniors and care workers who spend their days with them.

“I like Japan. It's very convenient. You can go to go anywhere by train,” says 29-year-old Putu Supadmi, a care worker from Indonesia, through a translator. “I don't need any motorcycle or vehicles or cars. And everything is clean and the food is tasty. So I like it.”

Supadmi has a big smile and a long black ponytail. She's been taking care of people at this nursing home for four years. Japan needs more workers like her because its aging population doesn’t have enough workers to care for the elderly.

By 2040, one in three among Japan’s 111 million people is projected to be elderly, according to Japan's National Institute of Population and Social Security Research.

In the past, Japan allowed mostly highly skilled professionals in the country. Now, due to severe labor shortages, Prime Minister Shinzo Abe has ordered the government to look into new policies that would attract less skilled workers to fill additional jobs. But the government will have to go beyond simply easing employment restrictions.

For many foreigners living in Japan, basic needs like renting an apartment can be overwhelming, says 28-year-old Juita Situmorang, Supadmi’s co-worker.

“Two months ago, I have experience about that. It’s difficult to rent an apartment,” says Situmorang. She’s lived in Japan for five years and her Japanese is pretty good, but this didn’t make finding an apartment any easier.

“When I tried to rent an apartment, they said you have to have a Japanese person be a guarantor for you and it can’t be someone you work with,” Situmorang says.

She was only able to find an apartment when a Japanese friend from church offered to help her.

“Renting apartments is a very big, hard thing for foreigners,” explains Toshihiro Menju, managing director and chief program officer for the Japan Center for International Exchange and author of multiple books on the country’s immigration policy.

Although conditions are starting to improve, Menju notes that racism and discrimination are still a problem — especially for non-white foreigners.

“I have to admit that exists,” he says. “We tend to admire … Caucasian — Westerners.”

Menju says the Japanese tend to look down on groups from other parts of Asia and Africa, with few exceptions.

For instance, Japan has embraced professional tennis player Naomi Osaka, the daughter of a Japanese mother and Haitian father. Menju says when she beat Serena Williams at the US Open this summer, Osaka became a national hero in Japan, even though she grew up in the US and doesn’t speak Japanese fluently.

It’s actually “because her Japanese is very terrible [that] people really like her,” Menju says. “She is like a child. She is so cute. That's very appealing to Japanese.”

High-profile athletes like Osaka are helping to open minds in Japan to foreigners and people from mixed backgrounds, Menju says. But foreign workers do not enjoy the same privileges as elite athletes.

Japan’s complicated visa system means most unskilled workers can only stay in the country for up to five years. Under a new two-tiered visa policy, still in the planning stages, unskilled foreign workers who acquire new skills that meet Japan’s urgent labor needs would be allowed to renew their visas for five years. Those with advanced skills will be allowed to bring their families to stay in Japan with limitless five-year visa extensions.

Meanwhile, Situmorang’s work at the nursing home is not what she expected when she migrated to Japan. In Indonesia, she worked for one year as a nurse, visiting sick patients in their homes. She wasn’t aware that she needed at least two years of experience to land a nursing job in Japan, among other requirements.

“We didn't know about being a nurse here," she says. "I want to work in a hospital but we came here [the nursing home]. I'm sad, a little.”

Situmorang’s husband, also from Indonesia, takes care of seniors as well. But he lives in Osaka, a city around two-and-a-half hours away from Tokyo, so they only see each other twice a month. He hopes to pass a nursing exam that would allow him to work as a nurse in Japan’s hospital system. If he’s successful, Situmorang says she’ll stay in Japan. Otherwise — she’s returning home to Indonesia.

The shortage of elder care workers in Japan is so severe that those who pass the nursing exam can live in the country with no limitations on visa extensions, but this doesn’t grant permanent residency status.

As for her co-worker Supadmi, she’ll also stay — as long as she can find an apartment.