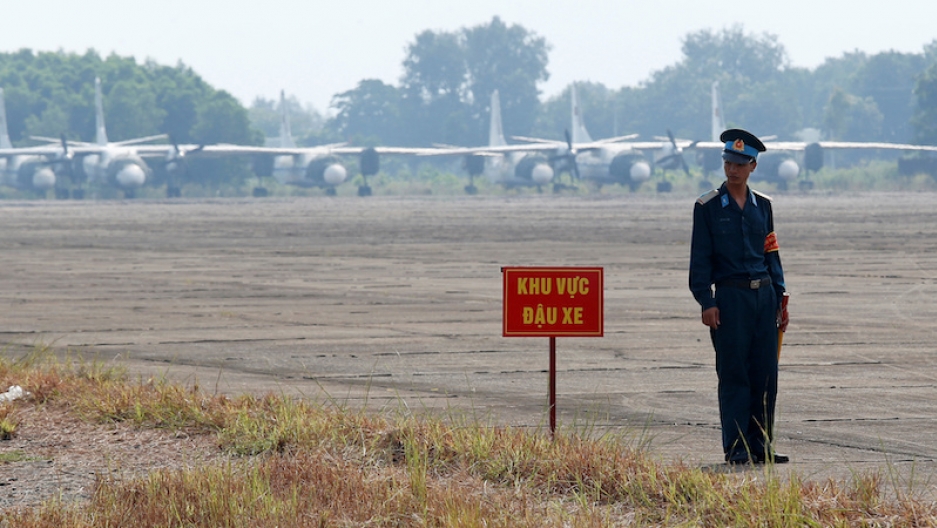 A Vietnamese soldier stands guard in front of military aircraft near a dioxin-contaminated area while US Secretary of Defense Jim Mattis (not pictured) visits Bien Hoa airbase, where the US army stored the defoliant Agent Orange during the Vietnam War.

US Defense Secretary Jim Mattis on Wednesday visited a former American air base in southern Vietnam that will soon become the biggest-ever US cleanup site for contamination left by the defoliant Agent Orange during the Vietnam War.

Standing near a skull-and-crossbones warning sign meant to keep people away from toxic soil, Mattis was briefed by Vietnamese officials about the massive contamination area.

In a possible sign of the sensitivity surrounding Agent Orange in Vietnam, where millions of people are still suffering its effects, reporters were not allowed to attend the outdoor briefing for Mattis at Bien Hoa Air Base.

"I came to show the support of the Defense Department for this project and demonstrate that the United States makes good on its promises," Mattis told his Vietnamese counterpart at a closed-door meeting later in nearby Ho Chi Minh City.

Cleanup is expected to start getting under way early next year.

US troops dropped Agent Orange during the Vietnam War to clear thick jungle. But it contributed to severe health problems that, according to the US Department of Veterans Affairs, can include Parkinson's Disease, prostate cancer and Chronic B-cell Leukemia.

Of the 4.8 million Vietnamese who were exposed to Agent Orange, some three million are still dealing with its effects, including children born with severe disabilities or other health issues years after their parents were exposed, according to the Hanoi-based Vietnam Association for Victims of Agent Orange.

More than four decades after the Vietnam War ended in 1975, ties between the United States and Vietnam are less seen through the prism of the conflict and more through shared concerns over China.

Vietnam has emerged as the most vocal opponent of China's territorial claims in the South China Sea and has been buying US military hardware, including an armed, Hamilton-class Coast Guard cutter.

The United States, in turn, accuses China of militarizing the strategic waterway, through which more than $3 trillion in cargo passes every year, and sees Vietnam as a crucial ally in drawing regional opposition to Beijing's behavior.

But US officials including Mattis — who is on his second trip to Vietnam just this year — hope that addressing America's wartime legacies like Agent Orange can become a vehicle for further strengthening ties.

When a US aircraft carrier visited Vietnam in March, for example, one of the places US sailors visited was a Vietnamese shelter for people suffering from the effects of Agent Orange.

The United States just completed a five-year, $110 million program that cleaned soil contaminated by Agent Orange at Danang International Airport, which was one of the main air bases used for storing and spraying the herbicide between 1961 and 1971.

But officials from the UN Agency for International Development, which is overseeing the project, said the Bien Hoa site will be four times larger than Danang, a massive undertaking that is expected to cost $390 million, according to a fact sheet distributed to reporters.

According to the US Congressional Research Service (CRS), one soil sample from Bien Hoa had a "toxic equivalency," or TEQ, of more than 1,000 times over the international limit.

A 2011 study conducted by a private consulting firm determined that contaminated soil had spread from hot spots at the base into nearby lakes, ponds, creeks, and drainage ditches, increasing the amount of soil and sediment that will require treatment.

"The impacts on the community is very difficult to measure. Dioxin has impacts (on health) at very low concentrations and they're not real consistent," one of the US AID officials said, speaking on condition of anonymity.