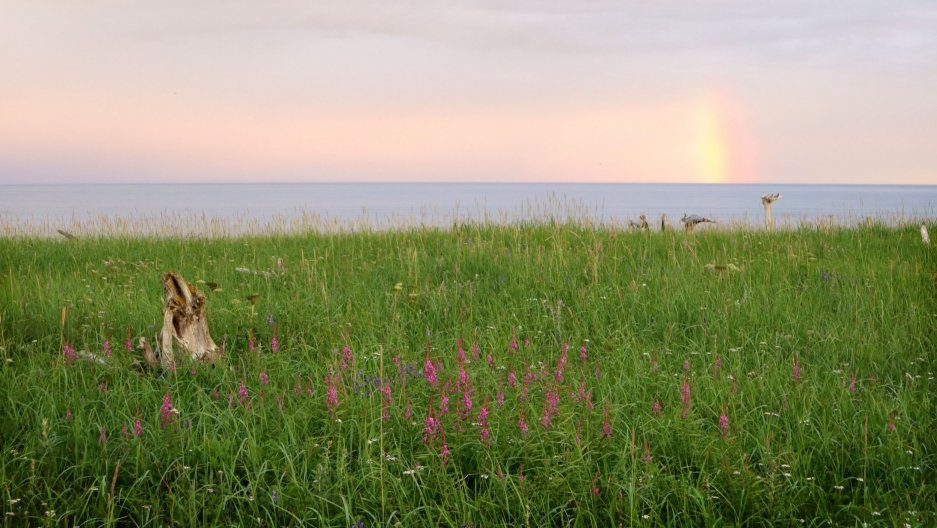 The Bering Sea separates families living in the United States and Russia in the Arctic. Once their travel is approved by both Russian and US officials, the weather, too, has to cooperate to allow people to reunite with their loved ones.

After spending four days just waiting in the airport terminal in Nome, Alaska, Valentina Koonooka decided to return to her friend's apartment in Nome and cook a big, steaming pot of borscht.

Koonooka and her two daughters were awaiting a break in the weather, along with a small group of Alaska Native travelers, for a less-than-two-hour flight across the Bering Sea to visit family in Russia.

It’s been many years since Koonooka last saw them in Novo Chaplino, her childhood home.

For generations, residents in this remote part of the world routinely crossed from island to island, moving freely across the US-Russia border. In 1948, J. Edgar Hoover officially closed the border between Russia and Alaska, citing safety reasons. In 1987, the “Ice Curtain” thawed slightly, but for transnational families, travel remains hard.

People normally make the trip during the summer, but even then, the weather can prove difficult, as Koonooka knows.

The tiny kitchen filled with the aroma of browning meat and onions. Koonooka tried to keep her mind off the waiting and the weather keeping her family grounded on Alaska’s side of the Bering Strait.

“I want to visit my parents that passed away many years ago, also my brother too,” she said. Her plan was to place flowers on her parents’ graves — “to say hello” — she said, as she choked back tears. 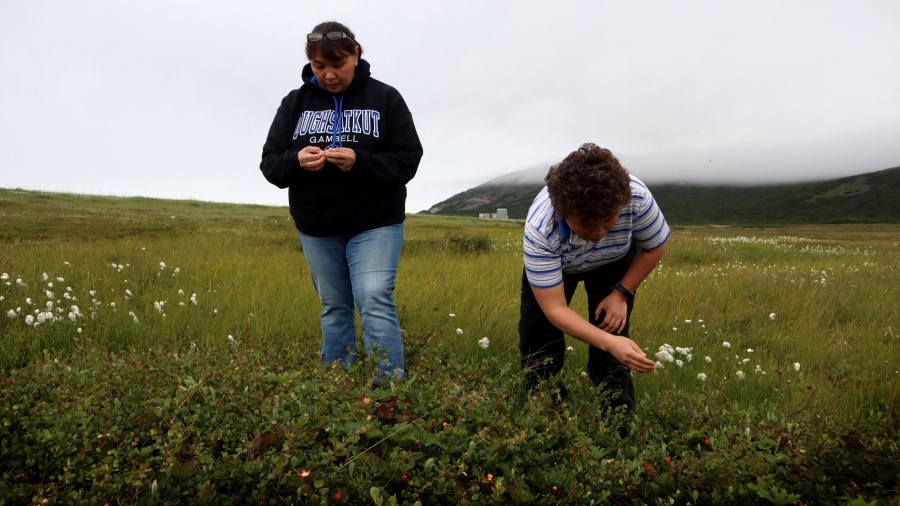 Valentina Koonooka, left, gathers salmon berries in a field in Gambell, Alaska, with Luda Kinok, right. Koonooka grew up in the small Russian village of Novo Chaplino, which is only 80 miles across the Bering Sea from Gambell, but Koonooka has only been able to visit her childhood home twice since leaving in 1994.

Koonooka lives in Gambell, Alaska — a small village on St. Lawrence Island in the Bering Sea about 80 miles from the coastal Russian village of Novo Chaplino where Koonooka grew up.

Three sisters, a brother, nephews, an aunt and many of her friends still live in Novo Chaplino.

Koonooka isn’t really that far from home, but getting there is tough. The runway on the Russian side often gets fogged in, grounding airplanes in Nome.

As she talked about her family, she stirred the hot, bubbling borscht.

“I watched my mom and then my sister — my sister makes [borscht] differently,” she said with a distinct Russian accent.

Koonooka admitted she doesn’t care much for beets, a root vegetable for which borscht is known. She leaves out the beets and adds carrots and tomatoes instead.

In 1994, while living in Novo Chaplino, Koonooka met her husband, an Alaska Native man from Gambell. She moved with him to Alaska and gave birth to her oldest daughter, Marina, about a year later.

In 2003, she became a US citizen. She’s only been back to Russia twice to reconnect since she moved away.

She gives the pot another stir and while telling stories about gathering herbs and root vegetables and cooking them with her daughters — skills she learned growing up in Russia that translate well to her life in Alaska.

“Me and my kids go pick roseroot and we also have fireweed,” she said.

Her daughters, Marina and Nadine, watched her cook and nodded their heads.

What Koonooka sees as an arbitrary border cannot change the significance of her memories and traditions. Sharing stories about her life in Russia makes Koonooka’s oldest daughter, 23-year-old Marina, tear up.

“I see people in Gambell and they’re always with their family and I have to travel all the way over there [to Russia] just to see the rest of my family,” Marina said. 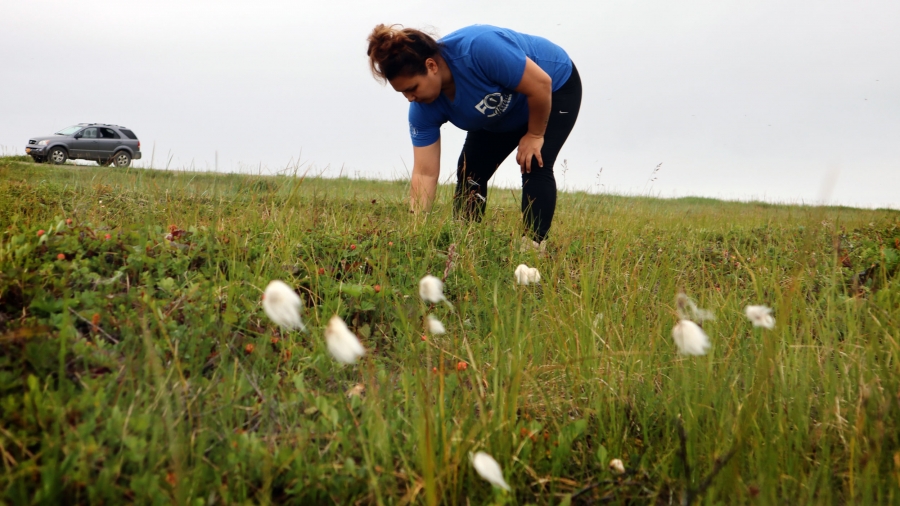 Marina Koonooka, 23, picks berries in Nome, Alaska, with her mother, Valentina. They were trying to pass the time while they waited for a good weather window to fly over the Bering Strait. Marina says she wishes she didn’t have to travel so far to see the rest of her family.

Various levels of government have attempted to ease the burden of travel for Indigenous people crossing the Bering Strait through initiatives like the visa-free travel program. But it requires a formal invitation from a family member on the other side and both Russian and US officials must formally review it. Travelers can only pass through specific entry points: Anadyr or Provideniya in Russia and Nome in Alaska. A visit is limited to 90 days.

“There are families right now that the elders are dying and they can’t go, because it’s cost-prohibitive and the politics,” said George Noongwook, an Alaska Native elder in his 70s.

Alaska Native people indigenous to the Bering Strait region, like George Noongwook, worry that further diplomatic strains between the US and Russia could hurt their ability to continue traveling visa-free. 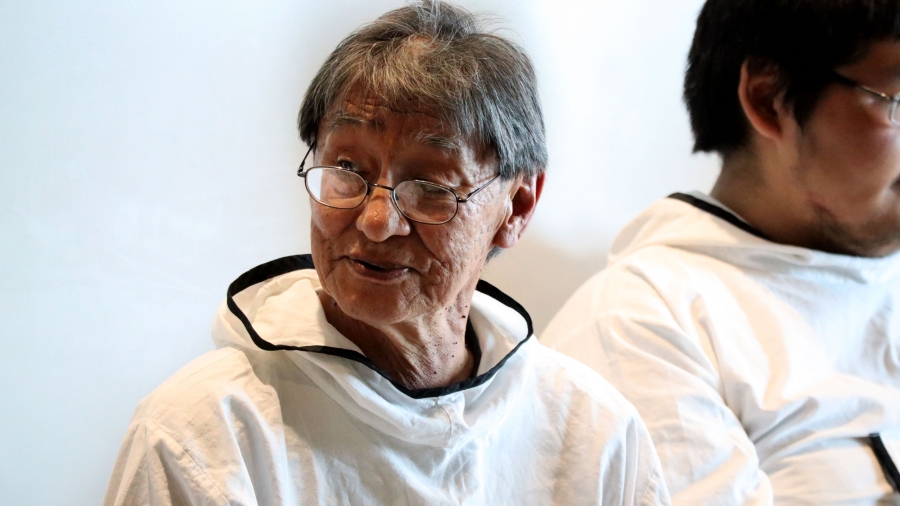 Noongwook leads a dance and drum group from Savoonga, the only other village on St. Lawrence Island. He remembers when boats sailed the Bering Strait more regularly.

Boats no longer make the crossing with any frequency, mostly for safety reasons. Seas can be extremely rough across frigid waters. A drowning incident of a father and son returning to Gambell in the 1990's further restricted travel by sea.

Now, people like Noongwook and Koonooka have to buy a plane ticket from Gambell or Savoonga to Nome for about $300. Once they get to Nome, they have to charter a flight across the Bering Strait to Russia, sometimes for more than $1,000. That’s a lot of money for people on St. Lawrence Island where jobs and resources are scarce.

These days, most people just use WhatsApp and Facebook to stay connected with friends and family on the other side.

“They show their dances, they post them on Facebook and I can watch them,” Noongwook said. “So, it’s good that way, but one-on-one, face-to-face is more important because we’re able to express our pleasure of re-meeting them. It fills us with happiness and love.”

And those are feelings apps just can’t replicate, Noongwook said.

In the end, Noongwook, Koonooka and the rest of their travel group, including Noongwook’s dance troupe and Koonooka’s two daughters, didn’t make it to Russia.

For nearly a week, everyone trekked daily to Nome's tiny airport terminal, drinking stale coffee and eating pizza, waiting for a green light to cross the Bering Strait.

Thick fog kept the group grounded for a total of five days. On the sixth, no one headed for the terminal. Instead, they made alternate plans to head back to their villages on St. Lawrence Island.

But many promised to try again next summer.