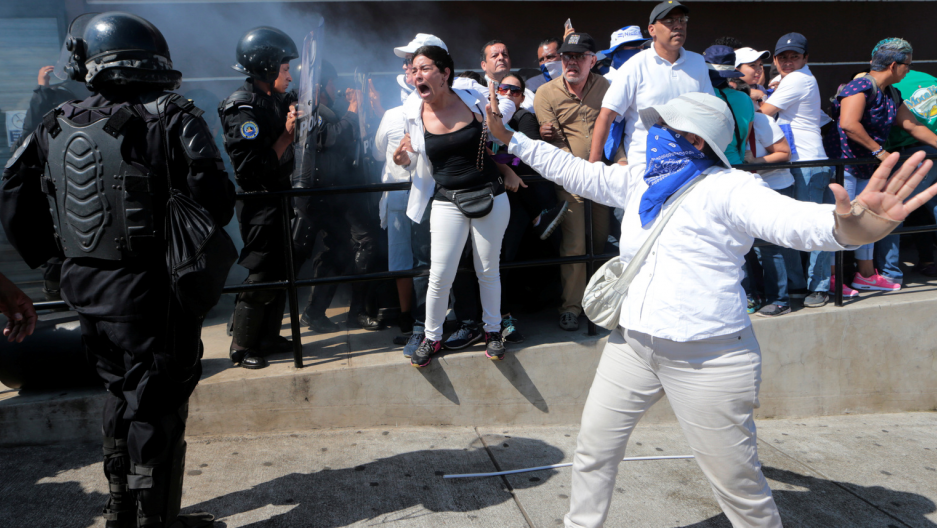 Protesting is now illegal in Nicaragua, according to President Daniel Ortega.

The Central American country has been embroiled in deadly political turmoil for months. Demonstrations that began in April against an unpopular social security reform quickly transformed into a broader movement aimed at ousting Ortega, Nicaragua’s authoritarian president.

Up to 450 people have since been killed, including a 16-year-old boy caught in the crossfire between government forces and demonstrators on Sept. 23.

The growing number of protesters arrested and charged with terrorism led the Inter-American Commission on Human Rights to call on Ortega to stop what they called his government’s illegal detentions.

Instead, the president in late September banned protests entirely. Thirty-eight Nicaraguans were arrested on Oct. 14 for planning to march against their government.

Ortega, a former revolutionary leftist who ruled Nicaragua in the 1980s, returned to office in 2007. Over the past 11 years, he has grown ever more autocratic, abolishing presidential term limits, enriching his family and restricting civil liberties.

The common wisdom is that Ortega enjoyed such a long and, until now, uncontested reign because Nicaragua’s economy boomed under his stewardship, in part due to cheap and plentiful oil supplied by Hugo Chávez.

According to this theory, the growth allowed his government to pay for extensive anti-poverty programs, earning him widespread popularity in the Western Hemisphere’s second-poorest country — until the economy began to stagnate last year.

But that’s not the whole story behind Ortega’s long rise and sudden unpopularity.

While Nicaragua has prospered financially under his leadership, my research finds that migrants living in Costa Rica, the US and Spain also greatly boosted the domestic economy by sending home millions of dollars each year.

Now, Nicaragua’s influential diaspora has turned its attention to the resistance against Ortega.

In a time when conflict and disaster are forcing even more people around the world to flee their homelands, these findings from Nicaragua underscore the central role that migrants can play in today’s globalized political economy.

Migration as an escape valve

The country was ravaged by civil war and burdened by debt. In 1989, Ortega’s socialist government was forced to undertake a series of austerity measures that left 14 percent of Nicaraguans unemployed.

Today an estimated 500,000 Nicaraguans live in Costa Rica, and more are fleeing the country’s political chaos every day.

Between 2007 and 2017 — the first decade of Ortega’s current administration — total migrant remittances to Nicaragua totaled $12.5 billion.

That’s more than 10 percent of Nicaragua’s annual gross domestic product, on average, and in many years substantially more than total foreign direct investment in the country.

Remittances also dwarf the roughly $3.7 billion in oil aid that Venezuela sent to Nicaragua during the same period.

Remittances took the pressure off Ortega

Ortega’s government indirectly benefited from this flood of foreign cash.

Still, Nicaragua remains very poor. About 40 percent of citizens survive on less than $2.50 a day.

Take the case of 70-year-old Juana Jiménez, a single mother who in the mid-1990s received a US work visa — her “gift from God” — and worked as a florist in Miami for nearly 20 years.

The $200 to $300 a month that Jiménez sent home covered medical expenses for her son Erik, who was born with severe disabilities, and saw her family through Nicaragua’s leanest post-revolutionary years.

Remittances, in both Nicaragua and other developing countries, have social benefits beyond keeping individual households out of poverty. Research shows that in such countries they have contributed to reductions in poverty, helped increase access to health care and improved school attendance by freeing children from the need to work.

Rather than complement government programs in those places, however, research shows that all too often, migrant remittances actually replace them.

For example, scholars Gary Goodman and Jonathan T. Hiskey have found that, in Mexico, local governments often reduce their expenditures in areas that consistently receive remittances from abroad.

And as remittances increase, electoral participation in democratic countries with high migration tends to decline. Rather than lobby public officials to upgrade their health clinic, say, or pave a road, citizens may look to the relatively well-off diaspora for solutions.

For a decade, the dual domestic impacts of international migration — economic growth and diminished citizen pressure — proved a winning combination for Ortega.

But then his government responded to April’s uprising with deadly repression.

Nicaraguan migrants did not trigger the protests against Ortega, nor are they the reason the demonstrations grew and strengthened.

But, today, my research shows, they are now helping to keep this pro-democracy movement alive by informing the international community, creating international advocacy networks, housing refugees and channeling funds to anti-Ortega groups.

It is too soon to know precisely how critical, or how financially substantial, migrant support has been to Nicaragua’s insurgency.

But studies done in other countries show that migrants from authoritarian countries frequently fund protests against dictators.

According to political scientist Idean Salehyan, an expert in transnational rebellions, more than 50 percent of all national uprisings after World War II — including those in Cuba, Ireland, Pakistan and Sri Lanka — were spearheaded by insurgents abroad.

That’s because migrants do not just change their home countries financially. They also influence the way local residents think.

Having connections with migrants living in more developed countries can encourage local children to stay in school, improve access to health care and seed support for democracy.

At first, the mass exodus of Nicaraguans aided Ortega in his quest to amass power and wealth.

Now, those same migrants may contribute to his overthrow.