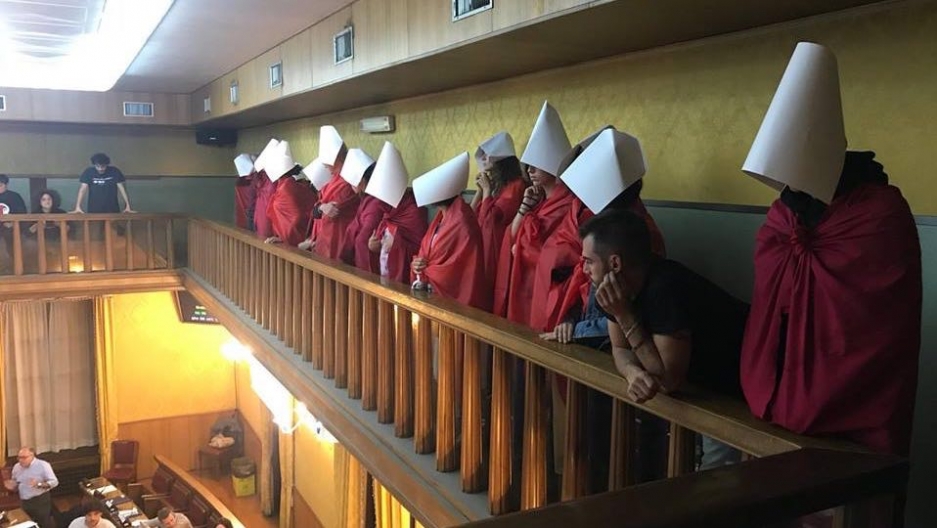 On Oct. 4, Verona’s local council approved a motion “to prevent abortion and sustain maternity,” which allows the use of public money to fund anti-abortion Catholic organizations and encourages doctors to dissuade women from aborting. Over 50 protesters dressed in scarlet cloaks and white bonnets, the outfit from “The Handmaid’s Tale,” stormed the town hall during the vote, but were escorted out just before the councilors declared Verona the first “pro-life city” in Italy.

It’s been 40 years since Italy legalized abortion with a landmark vote, but many women still struggle to access the procedure. The very law that decriminalizes abortion, in fact, contains a clause that exempts doctors and other medical personnel from performing a termination if they “have a conscientious objection, declared in advance.”

In this deeply Catholic country, where the division between church and state is still somewhat tenuous in practice, conscientious objectors have found it easier to progress in the health care system than nonobjectors. The number of Italian gynecologists who will not perform an abortion has increased from 58.7 percent in 2005 to a staggering 70.9 percent in 2016. And in some of Italy’s more conservative regions, fewer than 7 percent of doctors will carry out the procedure.

This means that women often have to visit several hospitals, encounter outright hostility and even travel hundreds of miles to find a doctor who will help them abort safely.

It’s a situation that is causing alarm among some women’s health leaders, and that, since the swearing in of Italy’s new, populist coalition government, headed by right-wing League and anti-establishment Five Star Movement, they fear could only get worse.

Late on Oct. 4, Verona’s local council approved a motion “to prevent abortion and sustain maternity,” which allows the use of public money to fund anti-abortion Catholic organizations and encourages doctors to dissuade women from aborting. The coalition of center-right councilors also tried and failed to present a motion that would require all aborted fetuses to be buried in a cemetery, even without the consent of the woman involved.

Over 50 protesters in scarlet cloaks and white bonnets, the outfit from Margaret Atwood's novel, “The Handmaid’s Tale,” stormed the town hall during the vote, but were escorted out just before the councilors declared Verona the first “pro-life city” in Italy. The move, rights groups say, is a sign of what is to come for women’s reproductive rights not only in Verona but in the rest of the country, too.

In fact, just a few days ago, politicians in another city — Ferrara, also in northern Italy — presented a motion almost identical to the one in Verona. If it passes, it will enable the local council to give public funds to private, Catholic organizations to use in anti-abortion campaigns.

“Unfortunately, this is not about women in Verona; it’s about women in the whole of Italy,” said Laurella Arietti, member of Non Una di Meno, the feminist organization that protested the motion. “Since the postwar years, Verona has always been a testing ground for extreme right-wing ideologies and [leaders] in neofascist movements. It is also where these pro-life, conservative Catholic organizations have been strongest.”

Non Una di Meno was inspired by the feminist, anti-gender-based-violence movement thart started in Argentina in 2015 with Ni Una Menos, and translates as: “Not One [woman] Less.”

On Saturday, thousands took to the streets of Verona to continue the protest against the motion.

Better known abroad as the setting for William Shakespeare’s "Romeo and Juliet,” Verona has deep historical ties to fascism (Benito Mussolini’s puppet government was set up in Salò, about 50 miles from Verona) and a strong Catholic identity, which have long made it a stronghold of the Italian right-wing. It is also the city of former Deputy Mayor Lorenzo Fontana, who is now Minister of Family and Disability under the coalition government and has been a loyal member of the League for over two decades.

“He is a butcher of women’s rights,” said Arietti about Fontana, whose connections to the far-right and Catholic fundamentalist movements in the city are well-known.

Shortly after he was appointed, Fontana vowed to reduce the number of abortions and declared that the state would work harder to dissuade women from going through with the procedure. He is also a member of Comitato No 194, an organization thats wants to repeal Law 194 — which legalized abortion 40 years ago — and replace it with a law that would punish women who terminate their pregnancies with up to 12 years in prison.

“What happened in Verona is worrying, and shows us that the political climate in Italy is increasingly impregnated with this kind of ideology,” said Irene Donadio, a spokeswoman for the International Planned Parenthood Federation European Network. “Doctrines like this endanger the health and the lives of women,” she said, bringing up the case of Valentina Milluzzo, a Sicilian woman who died in 2016 after doctors refused to carry out an abortion that would have saved her life. “Telling a woman that she must continue with her pregnancy and that she is not allowed to choose is an extremely serious violation of her most basic rights. It’s an act of violence.”

Related: Outgoing Planned Parenthood head says rights are 'at risk under this government'

Donadio says that the Catholic, anti-abortion lobby has long been influential in Italy, and is in part responsible for the funding cuts to family planning clinics and for the increase in conscientious objectors in the Italian health care system.

However, the global political climate and the rise of populism are giving these anti-abortion groups even more influence: League politicans have expressed admiration for both Donald Trump and Vladimir Putin, and many of its representatives share their views on women’s reproductive and sexual autonomy — Alberto Zelger, the League councilor who presented the anti-abortion motion in Verona, cites Putin as his role model.

“When certain groups want to exert their power, women’s reproductive rights are the first to be attacked,” said Donadio. “Let’s not forget that one of the first things Trump did when he got into power was to sign the ‘global gag rule’ [a law prohibits allocation of US funding to foreign nongovernmental organizations that offer abortion services]. It sends a clear message.”

“I am enraged at what happened in Verona, but not surprised,” said Silvana Agatone, president of Laiga, an association of gynecologists who support abortion rights. “This is part of a targeted, well-planned agenda to turn back the clock on women’s rights.”

Agatone is referring to a 2018 report by the European Parliamentary Forum on Population and Development that details the workings and strategies of Europe’s connected, anti-choice movements. “These groups are against abortion, against divorce and against homosexuality, all things that they consider as part of a moral decline in Europe,” said Agatone. “All citizens should be concerned because this motion is only the beginning. Women’s rights risk taking several enormous steps backwards.”

Under the guidance of the League’s Matteo Salvini — who, in 2016, made international headlines when he compared Laura Boldrini, the former president of the Italian Chamber of Deputies, to a blow-up sex doll — Italy’s coalition government has often shrouded its attacks on women and LGBTQ rights with language in defense of the “traditional family.” Only a few weeks ago, in September, the League proposed draft legislation that would drastically change Italy’s divorce laws by abolishing child support and encouraging “perfect co-parenting.” But the draft’s critics fear that the proposed changes will harm women and make it harder for them to leave abusive marriages.

The proposed law “does not consider the economic and occupational disparities which still characterize Italy’s society,” anti-domestic violence activist Nadia Somma wrote in Il Fatto Quotidiano, and would “turn back the clock 50 years on women’s rights.” The man behind the proposed legislation, the League’s Sen. Simone Pillon, is staunchly anti-abortion and is one of the organizers of Family Day, a yearly anti-gay-marriage event.

Yet, despite the anti-feminist and anti-choice rhetoric that has come to dominate Italian political discourse, Donadio is convinced that Italian women will not give up the rights that they have fought so hard to obtain.

“Italy is a Catholic country, but Italian women have already made their position clear, and have been free to decide about their sexual and reproductive lives for 40 years now.”

And, while misogynist language is being wielded by populist leaders across the world, from Italy to the US and most recently Brazil, Donadio points to more positive examples: In May, the deeply Catholic Republic of Ireland voted overwhelmingly to overturn the ban on abortion, while more recently, a referendum banning gay marriage in Romania failed miserably.

“It shows that people in Europe do not want to go back in time,” said Donadio.