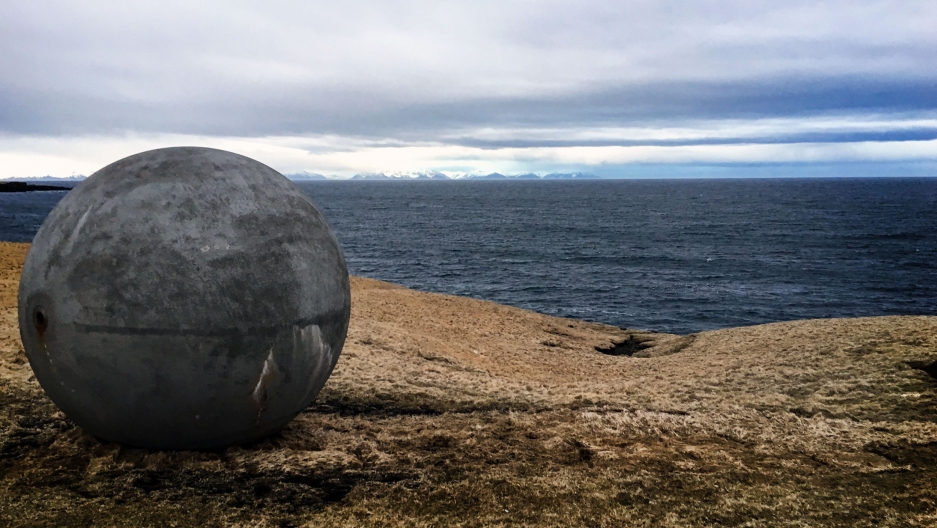 The monument Orbis et Globus overlooks the Greenland Sea from its current location on Grímsey Island in Iceland.

This story comes to us through a partnership with the podcast and radio program Threshold, with funding support from the Pulitzer Center.

On the island of Grímsey, off the northern coast of Iceland, stands an enormous concrete sphere nine feet in diameter, grey and pockmarked, with a big hole in the center. It looks like something that might’ve been flung from the slingshot of a mythological Nordic giant. It is wonderfully weird.

It’s called Orbis et Globus (Latin for “Circle and Sphere”) and it was placed here to mark the line drawn on the map that defines the Arctic Circle. Simply put, everything north of here, to the top of the planet, is the Arctic — the part of the world that falls into at least 24 hours of darkness for at least one day a year, the Northern Hemisphere’s winter solstice.

But there’s a twist. That line on the map appears fixed, and in most people’s minds, it is. But the sculpture was designed to move. And it has to be moved, every year.

Because it turns out that the Arctic Circle will not sit still — which is news to a lot of people.

Across the Arctic, on this same line in spots all around the world, there are fixed signs marking the Arctic Circle, which draw tourists who take pictures, and maybe buy souvenirs. And that’s the way it was for years on Grímsey Island, too, the only habitable spot in Iceland currently touched by the Arctic Circle. Tourists would typically fly in, head to a modest aluminum sign, take pictures and head back out. 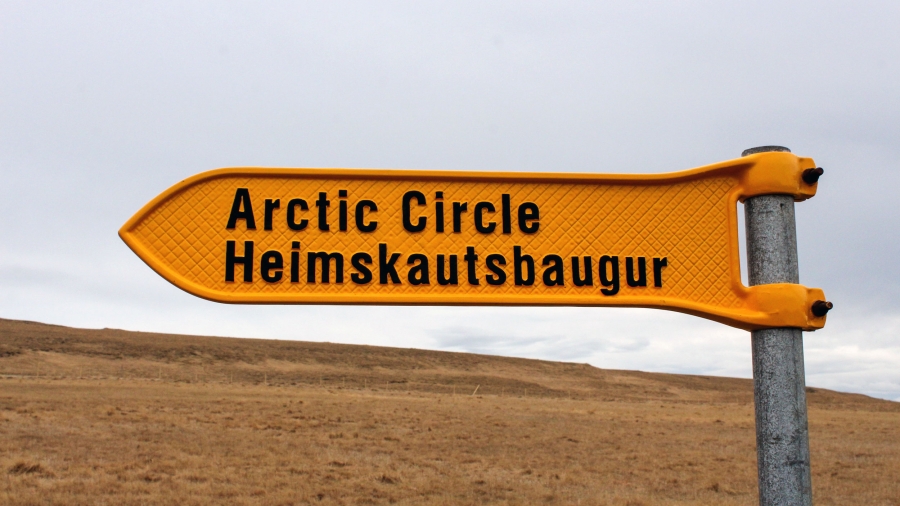 One of the signs on Grímsey Island denotes the Arctic Circle, though the circle itself moves from year to year and is currently moving off Grímsey Island entirely.

That’s the way it was, that is, until Kristinn Hrafnsson and Steve Christer got involved. Hrafnsson’s an artist and Christer’s an architect, both from Iceland's capital, Reykjavík, and in 2013, they heard about a competition to make a public art piece marking the Arctic Circle on Grímsey. As Kristinn looked into it, he got intrigued by one small detail about the project.

“I stumbled across a small number [showing that] the Arctic Circle is moving 14 centimeters a year,” Hrafnsson says, “and I found this rather strange. So I thought, ‘let's search this out.’”

That research led Hrafnsson to a third character in this story — Thorsteinn Saemundsson, an astronomer who’s now retired from the University of Iceland. He specializes in the effect of the Sun on the Earth.

Saemundsson told Hrafnsson and Christer that it was true, that the Arctic Circle is moving. And the reason is that the tilted axis of the Earth is itself moving—slowly rocking up and down between 22 and 24-and-a-half degrees latitude. Saemundsson says this movement happens in a predictable cycle. 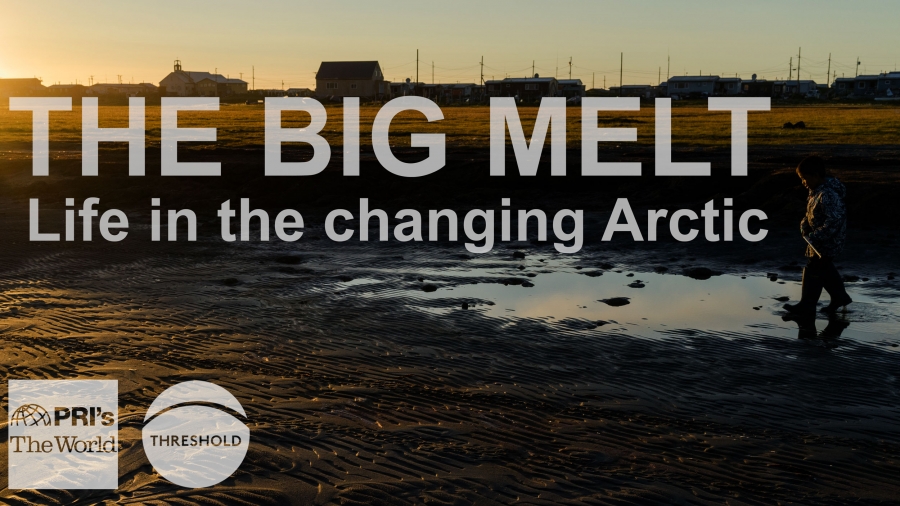 The phenomenon is called axial tilt, and it slowly changes the amount of the planet that goes into total darkness and total daylight every year.

That means the Arctic Circle is moving north, and for Iceland, it means that the circle is slowly slipping away.

In 2013, the local government decided the simple Arctic Circle marker on Grímsey was due for an upgrade and launched a competition to design a new marker. The competition noted that the Arctic Circle was in fact moving — 14 centimeters a year, the official notice said.

But when Hrafnsson and Christer consulted with Saemundsson, he told them it was actually moving a whole lot more than that — an average of 14 meters a year on Grímsey. At that rate, the Arctic Circle will only touch the island for a few more decades, until 2047. After that, the circle will leave all of Iceland behind for thousands of years, until the Earth's axial tilt slowly brings it back. 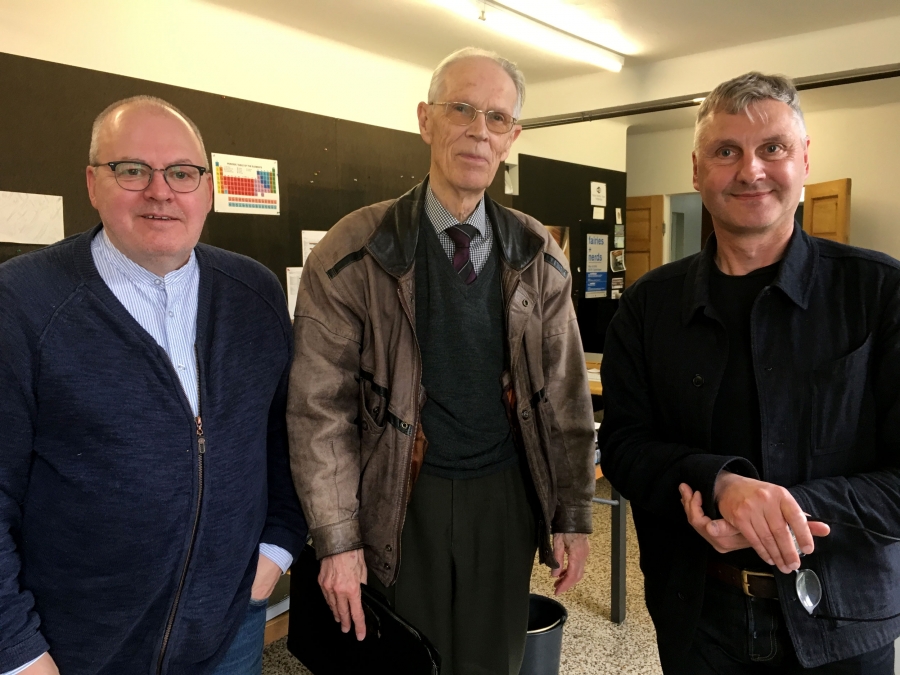 When they found this out, Hrafnsson and Christer realized they had a decision to make. They could ignore the science of how the Arctic Circle actually works, and just make another stationary monument in the same old place. Or they could let this new information reshape their whole idea for the monument.

Ultimately they decided the complicated facts were much more interesting than the nice, easy fiction. 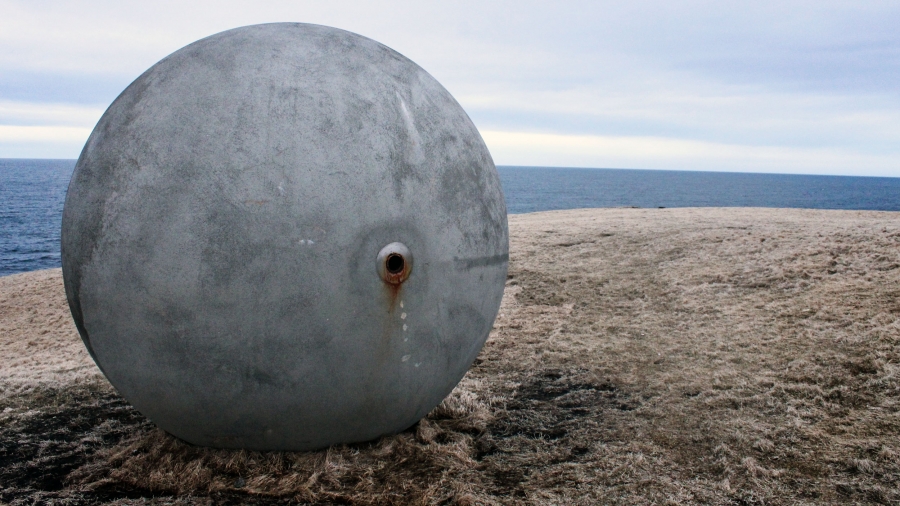 The sphere is about nine feet wide and weighs eight tons — making it heavy enough to withstand Grímsey’s winds.

New design for a new understanding of the Arctic

“Everything is changing, everything's on the move,” Hrafnsson says.

That presented opportunities to think creatively.

“So we had lots of different ways of representing this moment,” Christer says. “And then gradually it crystallized into something as simple as a ball, because it's something you can move. And it also represents [the planet] we're on, because everything that we're talking about or thinking about is actually affected by balls.”

OK, so, some kind of ball. Something that rolls. But also, something that doesn't roll too much, because Grímsey is a windy place.

So — an enormous, eight-ton ball.

“It's bigger than us,” Christer says. “That was the thing that we realized, it had to be big enough to be something that you couldn't put your arms around. Even if five people link their arms, they'd be having trouble. So it's something you can't contain. It has its own life and does its own thing. And we just have to follow.”

Wherever it goes. Because it’s even more complicated.

“Even though we know it's going north this summer,” Christer says, “it will [also] go south.”

It turns out that the Arctic Circle isn't only moving in one direction.

Along with that 40,000-year sway in the Earth’s axis, there's a much smaller, faster wobble happening as well. Saemundsson says this one is caused by the tug of the moon’s gravity.

What it all adds up to is this: The movement of the Arctic Circle isn't a straight line. It's a squiggle — a big line moving in one direction, with a bunch of smaller little zig-zags.

With, Saemundsson adds, one last complication.

“There's one factor that comes into this, which people seldom think about," he says. "And that is the movement of the Earth's crust. This is something we can't predict very accurately.”

Pieces of the Earth's crust are also constantly on the move. The planet’s plates slowly drift over time, so the exact coordinates of the Arctic Circle on the landscape also drift in an irregular way. 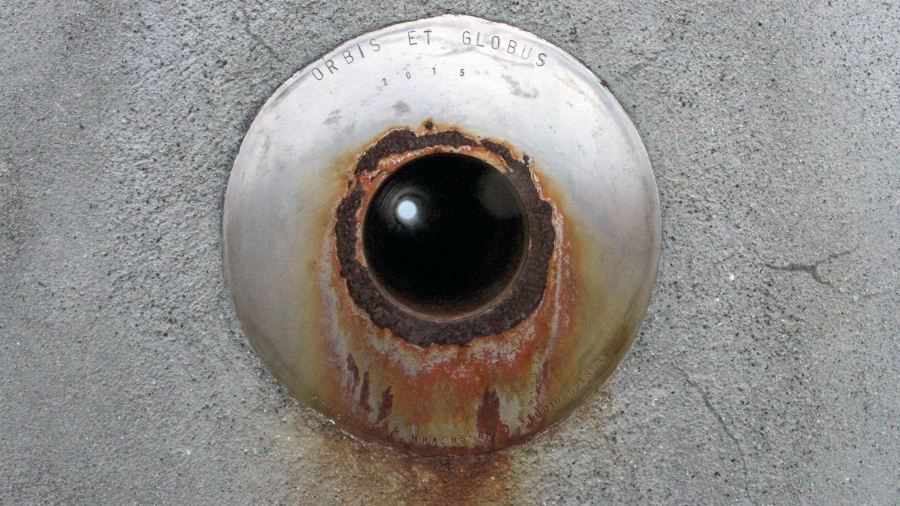 The hole in the center of Orbis et Globus is slightly stained with red rust.

As you learn all this, your heart kind of goes out to Hrafnsson and Christer and the organizers of the competition for the new marker. It seemed like a simple challenge—make a monument to the Arctic Circle on this tidy little line that human beings have drawn around the top of the Earth. But the deeper these two went into it, the more complex it became.

“But I think that's also something you accept,” Christer says. “As you get older you realize that you don't have a grasp on everything. The older you get, the more you realize you don't know.”

It happens to all of us — a moment when we learn something that makes everything so much harder and more complicated than we thought. And then we have to decide if we're going to take that in or turn away.

And it happens a lot with climate change, something that’s changing the very nature of the Arctic far faster than the Arctic Circle itself is shifting. As we learn about how our own actions are affecting the climate, it can get so overwhelming for some of us that we'll grab onto any alternative story, anything that helps us just turn away.

And one of those stories is actually related to this story — the narrative that says the planet is heating up not because of the carbon pollution we’re pumping into the atmosphere but because of those changes in axial tilt, and other natural processes.

It’s an alluring idea, but it’s just not true.

Yes, the Earth's climate does change naturally. The planet has always fluctuated between ice ages and warmer periods, and changes in axial tilt are part of what drives that. But those changes play out over tens or even hundreds of thousands of years, while the warming we're experiencing now is happening at lightning speed in comparison — we can measure it in decades.

And the cause of that warming is clear — it's us. Burning fossil fuels moves carbon into the atmosphere, and that traps more heat.

This is a fact. So we have a choice. Do we try to push it aside, so that we don't have to change? Or do we accept the truth, as difficult as it might be? When it came to making this Arctic Circle monument, Hrafnsson and Christer chose option No. 2. They opened themselves up to the more complicated truth.

“This is a moving thing,” Hrafnsson says about Grimsey’s new Arctic Circle marker. “It follows the circle, which is nothing you can touch or see. And that's interesting, that the object is following this idea.”

It’s not so much about the huge weird ball itself, which was ultimately rolled out in 2017.

“The piece itself is the movement,” Christer says.

We humans don't really like change. We like sharp lines, and firm definitions. But the actual, physical world doesn't work this way. It's hard to find a straight line in nature. Instead, there are curves, twists, and blurred boundaries. And always, always, change.

"Everything moves. Everything. Nothing excluded," says Hrafnsson.

Even, it turns out, the Arctic Circle. And an eight-ton ball of concrete, both of which are scheduled to leave Grímsey Island in 2047.

That year, Christer says, “is when Kristinn and I go up there with our [walkers] and kick it into the ocean.”

So the question we started with here is what is the Arctic. The answer? Anything above a zig-zaggy line, which fluctuates between 65-and-a-half and 68 degrees north.

Which is so messy and complicated. There's really nothing about the Arctic that obeys our rules.

Amy Martin is the executive producer of the podcast and radio program Threshold.