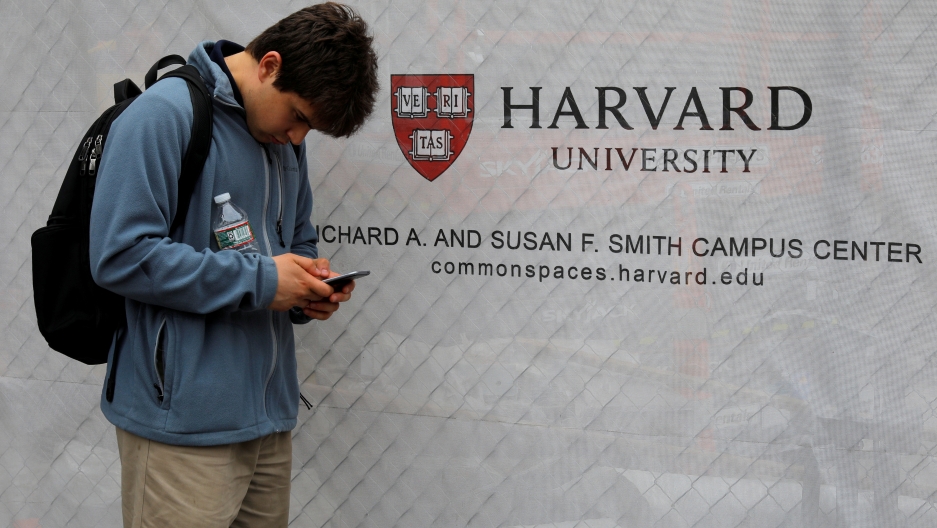 A man looks at his mobile phone beside a sign for Harvard University in Cambridge, Massachusetts on June 18, 2018. A federal court will begin a trial to hear charges that the university discriminates against Asian American student applicants.

Alyson Tom is a college counselor at Castilleja School, a private all-girls academy in Palo Alto, California. Lately, she’s been getting questions from some parents about how a federal investigation of admissions policies at Harvard and Yale will impact their children’s chances of getting in to college.

“They’ve heard about this lawsuit or they’ve heard through the grapevine that it’s harder to get admitted if they’re Asian,” says Tom. “I have some families that strongly believe that Asian American families are discriminated against in highly selective admissions. And I have other families who are not concerned about that and have faith in the system. It runs the full spectrum.” 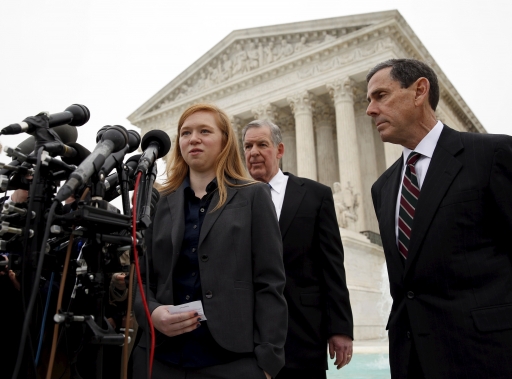 Abigail Fisher, the plaintiff in Fisher v. Texas, speaks outside the US Supreme Court on December 9, 2015 with her lawyer, Bert Rein, behind her and Edward Blum on the right. In June, 2016, the court ruled that colleges may continue to consider race among other factors in their admissions criteria.

On Monday, a lawsuit alleging that Harvard University discriminates against Asian American applicants will get its day in a US District court in Massachusetts. The Justice Department has launched an investigation into similar practices at Yale University. The students who signed on to the lawsuit have chosen to remain anonymous.

They are known collectively as Students for Fair Admissions, led by Edward Blum, who also orchestrated Abigail Fisher’s lawsuit against the University of Texas to challenge affirmative action policies. In 2016, the Supreme Court ruled against Fisher, saying that universities that use race as one factor among many in order to create a diverse student body are not discriminating against white students. The organization has filed a similar lawsuit against the University of North Carolina-Chapel Hill, but no trial date has been set. Blum says the Harvard plaintiffs he represents this time do not want to name themselves because they are worried about backlash.

The topic of race in college admissions is a contentious one, and one that many Asian American families don’t want to discuss publicly. But it’s something that students are talking about and parents are posting about on WeChat, a messaging service especially popular among Chinese immigrants. As high school seniors fill out applications for coveted spots in elite universities, they have concerns about the allegations in the lawsuit.

Join: We’re talking about affirmative action and discrimination in the Global Nation Exchange on Facebook.

One Asian American parent who is paying close attention to the Harvard lawsuit is Sanjay Dave, a father of two and a board member for the Mountain View Los Altos High School District in the Bay Area. He does not speak for the district on this topic, but he does have some personal opinions — as do many other parents in his circles.

“If we’re talking about my other Asian friends, we all know that we have to work harder. We’re all competing to get in. We all have that impression,” he says.

Dave’s older child graduated from high school last year. She did not apply to Harvard, but she did apply to other highly competitive universities with single digit admission rates. “She did not get accepted into her first choice, but she’s at a good place,” Dave says.

Still, he is frustrated by the lack of transparency in how elite colleges decide who gets in, citing some commonly reported data points: Students who are ethnically Asian perform higher on the SATs compared to other groups, but the Harvard lawsuit alleges that admissions officers gave Asian students lower “personality” scores.

“So obviously there are some factors that seem to be against Asians or at least make it tougher for them to get into these universities,” says Dave.

Many experts, however, say that data has been misinterpreted.

University of Maryland education professor Julie J. Park, author of “Race on Campus: Debunking Myths With Data,” who also serves as a consultant to Harvard University in this lawsuit, says that data has been warped to build a discrimination case. A 2009 Princeton study shows that Asian students accepted to several institutions had higher SAT scores on average. But that doesn't necessarily mean the university requires higher scores, but that it is possible the pool of Asian applicants had higher scores overall. She says the personal rating some universities give to applicants has also been misunderstood, and that Harvard uses outside evaluations and the personal essay to determine the score.

More about the debate over data: This college freshman is worried about affirmative action — but not that it will keep him out of Harvard

In Sunnyvale, California, among the office parks of Silicon Valley, Elton Lin runs Ilumin Education, a consulting service offering life coaching and college application advice to high school students. Unlike Asian Advantage College Consulting or Ivy League Coach — companies mentioned in the Harvard lawsuit for their services to help applicants stand out among a pool of similar Asian students — Ilumin’s services aren’t aimed specifically at Asians. Lin says the Harvard lawsuit isn’t a big discussion among the many Asian families who visit his office.

“I think with regards to the lawsuit that’s going against Harvard, it’s not at the top of most parents minds, even among Asian American parents’ minds,” says Lin. “I think there is maybe an understanding among Asian families already that race plays some kind of factor, but I don’t think that they — to be frank — are overly concerned about it.”

Still, a poll released in September by Insider Higher Ed and Gallup found that nearly half of college admissions directors believe some colleges hold Asian applicants to higher standards than others.

Tom says it’s not that simple. She has been a high school counselor for 10 years and worked for five as an admissions officer at Rice University in Houston. She says colleges consider many factors, including an applicant’s intended major, where they live, if they will play college sports, and whether their family members are alumni or donors.

“A school like Harvard and many of the Ivies and highly selective schools have very low admit rates,” Tom insists. “Most students who apply are not admitted. Most highly qualified applicants with strong grades and scores are not admitted.”

One of the students she advises is Becca, a 17-year old who wishes to be identified only by her first name. A volleyball player and president of her school’s Chinese affinity club, Becca supports affirmative action. She is among the majority of Asian Americans who share her view, according to a 2016 report by the National Asian American Survey, but Becca says she’s felt like she’s in the minority among her peers.

”Among Asian students my age, I actually haven’t met that many who are for affirmative action,” she says.

Last fall, she attended a youth diversity leadership conference. Affirmative action was a heated topic among Asian students, most of whom were either undecided or opposed to the policies. Becca says one student felt that affirmative action pits people against each other. She remembers him saying, “They want the Southeast Asians and the South Asians who are advantaged by this program to hate the Chinese students, and they want the Chinese students to not get into college. And they only want the white students to get into college.”

“It was not as calm and collected as our facilitator would have liked,” she says.

For her part, though, Becca has already experienced the benefits of learning among a diverse student body in high school.

“A lot of the classes I’m in, we have people of all different backgrounds,” she says. “When we have discussions about literature or historic events, a lot of these people can bring in stories about their own grandparents who have lived through a war in Asia or Europe.”

Using affirmative action to achieve that outcome is worth it, she says.

Becca just finished filling out her first two college applications. Her list includes schools that she is likely to get into, ones that accept the top 20 percent of their applicants, and also some highly selective colleges, including Harvard — although Harvard is not her first choice. Ethnically, she is Chinese, Korean and Filipino, and she is not worried that affirmative action will hurt her chances. Instead, she believes that race-conscious admissions policies might actually help her.

“A lot of schools are looking for diversity so they can fill their classes with people who grow from each other and learn from each other. And Asian people, because they have a different heritage, a different background than white students, they can bring something to the classroom.”

Dave would like to see race removed as much as possible from the college admissions process. He sympathizes with admissions officers who have to make tough decisions because he has had to help decide which of many talented students will be awarded scholarships.

“We have to choose one or two people to get the scholarship and it’s a very, very difficult decision,” he says.

If it were up to him, Dave would rather see universities give preference to applicants who grew up poor instead of considering a student’s race. His younger child is now an eighth grader. He hopes the next time his family goes through the college application process, things will be different.

“I’d like to see if universities can be more transparent about their decision-making process,” he says. “I think it would help the students and help everyone understand what it’s going to take to get into some of these universities.”

Neither Tom nor Lin are sure about how the outcome of the Harvard lawsuit will affect how they advise students.

“I would still advise students to be themselves, to have balanced lists, to be thoughtful about their process,” Tom says. “I’m not really sure what happens next if this case is won by the plaintiffs.”