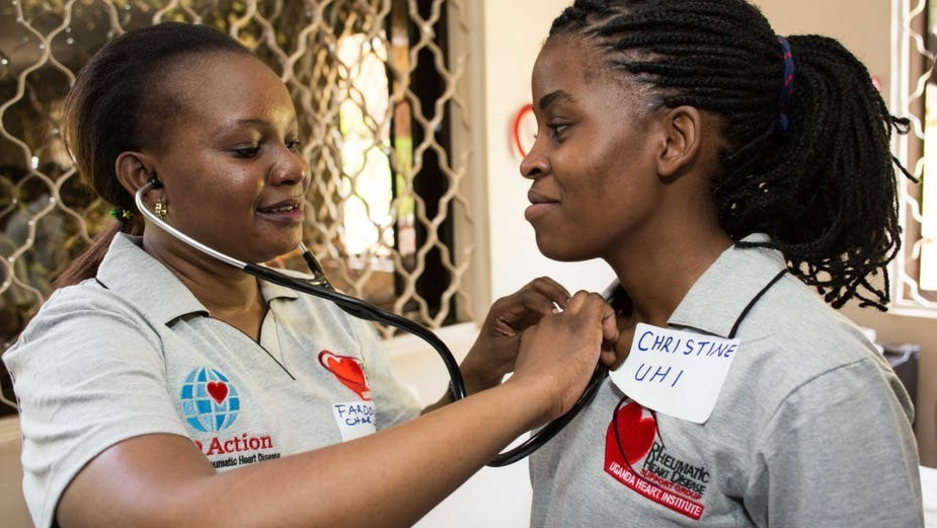 A nurse in Uganda uses a stethoscope to listen for heart problems at a screening and educational event on Oct. 31, 2017.

Share
Heart disease is the number one killer of women, claiming a female life every minute. Yet it is often seen as a “man’s disease.” This disparity is magnified in sub-Saharan Africa, where we have recently conducted an investigation into the experiences of women living with rheumatic heart disease.

Another prevailing myth that we often encounter is that cardiovascular disorders are not a major issue in the developing world. To the contrary, heart disease is already the number one cause of death worldwide as well as in low- and middle-income countries.

This shift has, in part, been due to ongoing successes in fighting contagious epidemics, particularly HIV/AIDS and childhood infections. Industrialization and economic development of low-income nations has brought more food security and decreased reliance on manual labor. Yet, these changes have fueled an increase in noncommunicable diseases such as diabetes, high blood pressure and high cholesterol, leading to a surge in cardiovascular disease.

In contrast to their high-income counterparts, patients in poor countries are struck by, and die from, cardiovascular conditions at younger ages. Their health systems are often unprepared to combat the dual tides of infectious and noncommunicable illnesses. Furthermore, the causes of heart disease are somewhat different in poor countries, where the proliferation of “Western” maladies like heart attacks and hypertension are accompanied by “endemic” cardiovascular diseases of poverty such as rheumatic heart disease.

Rheumatic heart disease (RHD) is a preventable disorder that is a late effect of rheumatic fever, which ravaged Western Europe and the US only a generation ago but is rarely seen now in these settings. It is triggered by Group A streptococci, which causes strep throat. Some individuals will develop a systemic reaction known as acute rheumatic fever, which can permanently damage the heart valves.

In the developed world, acute rheumatic fever is rarely seen, because strep throat is regularly treated with antibiotics. In developing nations, however, appropriate medications are often missed or are financially unfeasible. Rheumatic heart disease afflicts up to 43 million people worldwide and leads to up to 1.4 million deaths each year. It can have terrible consequences, including heart failure, irregular heart rhythms, and debilitating stroke.

Women of childbearing age with rheumatic heart diseases are especially vulnerable, as the disorder places them at increased risk of complications during pregnancy. Furthermore, the blood-thinning medications used to treat RHD can also raise the risk of miscarriage and maternal hemorrhage. Although pregnancy in this population is high-risk, only 3.6 percent of women with RHD of childbearing age use contraceptives.

Our research group recently concluded a mixed methods study in Uganda of women of reproductive age living with rheumatic heart disease to better understand the lived experience of this population.

Several themes emerged: First, we discovered that female RHD patients understood that their disease increased their risk of complications and death during pregnancy. Nevertheless, they still felt pressure to take the risk, citing the societal pressures to have many children. In fact, 100 percent of our participants answered that society would look poorly upon a woman who cannot bear children.

Further, our findings suggest that it may not be women themselves who control reproductive decision-making: Male partners were usually drivers of reproductive intent, both directly (by petitioning their spouses for children) or indirectly (due to women’s fears of abandonment if unable to bear children). Tragically, 28 percent of participants reported that they had been left by their husbands or boyfriends due to perceived limitations of fertility, while 36 percent of participants confessed fear of abandonment by their male partners.

Compounding their challenges, participants suggested that contraception may be criticized, leading to poor adoption — a social norm previously reported in Uganda and its neighbors.

Perhaps the most striking finding, however, was that women living with heart disease experience considerable stigma. Because of its ubiquity, we do not consider cardiovascular conditions to be the source of much stigma in the developed world, yet it was spontaneously reported by our group. Several participants were suspected by friends and family of having HIV because they were observed taking medications for a prolonged period of time (as opposed to short durations for drugs such as antibiotics).

More surprisingly, our patients reported that they felt it may be preferable to have HIV than heart disease. They attributed this to the fact that having HIV may not limit their reproductive potential the way cardiac conditions do.

In light of these sobering findings, our team also asked participants how they thought the current medical system could better serve their needs. First, patients suggested that health care providers discuss the reproductive consequences of the illness and its therapies. This concern has been echoed by women living with serious chronic disease in Europe as well. In addition, women stated that doctors should involve male partners and family members in discussions about heart disease.

To that end, Uganda’s health system has commissioned an initiative to better care for women of reproductive age living with heart disease. Uganda’s first Women’s Heart Center is a collaboration between cardiology and obstetrics, a multidisciplinary effort to cross-refer patients who are pregnant or plan to become pregnant and have heart conditions. From the lessons we learned from our study, we hope to incorporate family counseling and public awareness campaigns to fight stigma against cardiovascular disease in women.

Our study suggests that there is still work to be done in identifying the comorbidities and downstream outcomes of this population. These are areas of ongoing investigation for our team. Nevertheless, we are optimistic that there are opportunities for improved family and societal education programs and community engagement, leading to better outcomes and patient empowerment.